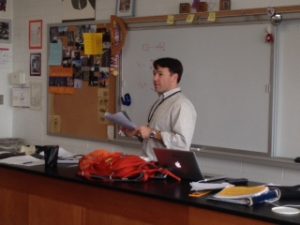 News Editor
On course recommendation day this Friday, sophomores will notice that their science class options have changed. Instead of having the choice between regular Physics and Honors Physics, sophomores will either be recommended for regular Physics or AP Physics 1.
According to both Science Division head Keith Bellof and Physics teacher Mark Welter the curriculum will stay relatively the same with a few topics being moved around.
“AP Physics 1 will be a natural progression from Honors Chemistry. The same students that would be taking Honors Physics should be the ones taking AP Physics 1,” Bellof said. “It is mostly a name change.”
Both Bellof and Welter said that this change will provide students with more opportunities to take more AP classes. According to Bellof, this has been part of a district-wide change from honors Physics to AP Physics 1.
One misconception is that AP Physics C, the AP Physics course for seniors, is the same as AP Physics 1. According to Welter, AP Physics C is a calculus-based Physics course and is a prerequisite for Engineering and Science majors whereas AP Physics 1 is an algebra and trigonometry-based Physics course.
Another major change in the Science department is that AP Physics C will be two class periods long instead one. Currently the other AP science classes such as Chemistry and Biology are two periods long.
According to Bellof, AP Physics C needed to be two periods long in order to adhere to the college board rules. This will allow for AP Physics C to have both a lab and lecture period whereas before they had to do both in one period or spread it out into multiple days.
“The course we currently teach is very thorough,” Welter said. “If we teach the same material, but rearrange the order, I do not have a problem with [AP Physics 1].”