Changes made to Homecoming Week 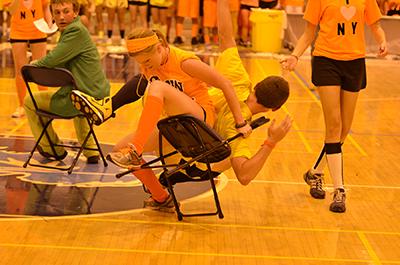 For years, Color Day and Knightgames have been highly anticipated traditions during Homecoming Week; this previously friendly competition between grade levels stirs up rivalry and excitement like no other.

However, last year’s Color Day and Knightgames were marked by raucous antics and near-riots. After this happened, it was clear something had to change. According to Associate Principal Greg Minter, the logical choice was to eliminate Knightgames from Homecoming Week and modify Color Day.

“It doesn’t really fit with the philosophy of Homecoming and of our school in general,” Minter said. “Homecoming is supposed to be about unifying…and having that competition in some ways seemed to bring out the worst in people. That’s just not really what we wanted Homecoming to be about.”

Besides getting rid of Knightgames, Color Day has been changed to simply “Neon Day,” in which students can show off their colorful and bright wardrobes. This gives students the opportunity to still dress up like before, just in a way that is less about separation of classes and more about unification.

Besides that one day, Homecoming Week will be very much the same, the only other change being the much earlier date.

According to Minter, the event was originally scheduled for the week of Sept. 30, making the dance Oct. 5. However, shortly after scheduling it, band director Chris Barnum found out a band competition would be held that same weekend. Rather than continue forward with the plans, causing band members to miss out, they decided to move the week.

There were two options: Oct. 22 and Sept. 21, corresponding with home football games; ultimately, the earlier date was chosen because of concerns over cold weather later in October. Thus, this year’s Homecoming celebration will come earlier than in the past.

Although the discontinuation of Knightgames may be upsetting for some students, Minter emphasizes that the administration is always open to new ideas for different events and encourages those who want to see a change to speak up.

“We’re certainly willing to listen to different ideas,” Minter said. “We just want to make sure it goes with the purpose of the week, Prospect pride and unification.”