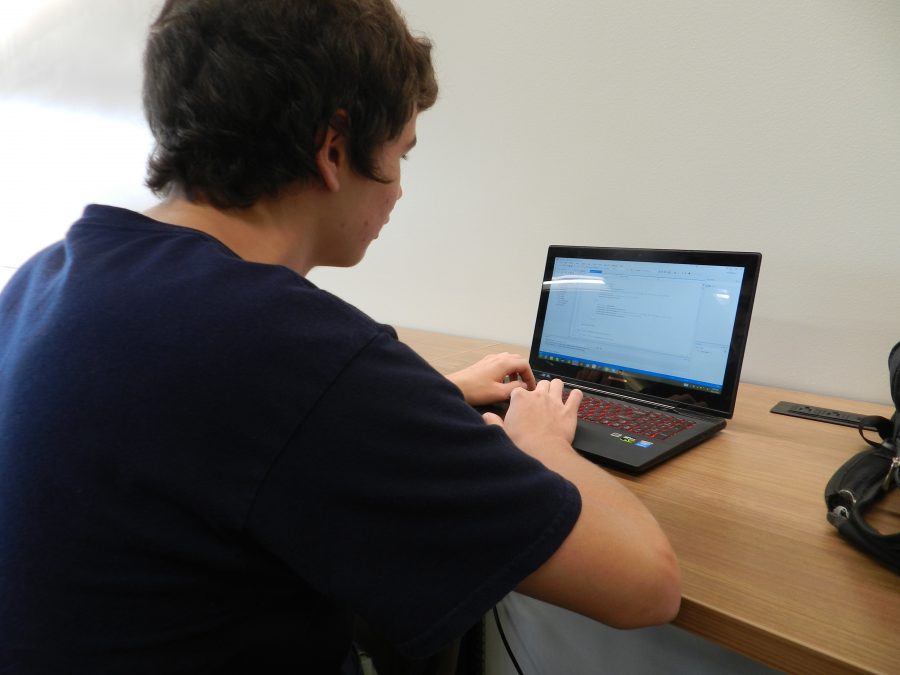 By Caroline Binley (@carolinebinley)
There’s a new foreign language program growing at Prospect. No, it’s not Chinese. It’s Java … and Swift, and HTML and CSS.
According to computer science teacher Frank Novak, 70 students participated in the computer science program two years ago. That number rose to 201 last year and increased another 20 percent this year.
For senior Eric Nować, watching that number grow has been bittersweet.
When he was in eighth grade, he introduced himself to coding by inspecting the element (looking at a website’s HTML and CSS) and watching online tutorials. As a freshman, Nować joined Coding Club instead of choosing from a then-limited range of coding classes.

Nować remained self-taught until he took Mobile Makers junior year. This year, he’s taking Computer Repair at Harper in addition to AP Computer Science, which is being offered at Prospect for the first time in 20 years. Though he’s sad he came to Prospect too early to take advantage of all the options that are now available, and he’ll graduate before more options included AP Computer Science Principles are added to the program, he’s still happy to watch it grow.
“It’s nice to see that some kids now get a start in class instead of having to go on their own and do what I did, Google for hours and try to find tutorials that make sense,” Nować said.
And though he’s past the level taught in his computer science courses, he does still find opportunities to learn.
“There are some things you don’t know you have to know,” Nować said. “When you’re looking things up online, you have to know what to look for. There are some things I still learn through [AP Computer Science], and just having that interaction with other people becomes enjoyable.”
Junior Jimmy McDermott, who took Mobile Makers along with Nować last year, also learned to code before entering Prospect. His dad sparked his interest five years ago by mentioning how much computer programmers make, an average of $76,000 a year. However, McDermott used Mobile Makers to develop his first published app. ProCast, available in the app store, allows directors and students alike to manage high-school theater productions.
Just as the two started coding outside of Prospect, they continue to code as an extracurricular.
Nować’s coding is primarily self-motivated. He codes as much as he can to remove tedious everyday tasks, and his calculator is set to do everything from finding slopes of lines to kinematics equations.
“What we do is we take a problem that would take maybe two minutes each day to do, and we spend four days figuring out how to automate it,” Nować said. “Then for the rest of our lives we never have to do it again. That is inherently what we are: the laziest people on earth. The only thing that motivates us to do what we do is not wanting to do it at all.”
In addition to automating tasks, Nować designs gaming apps for both Apple and Android. His current projects include “Bit Battle,” a multiplayer fighting game, and “Knight Runner,” which you play as a Knight in a quest to defeat other school mascots.
McDermott’s apps, on the other hand, are more utility-based. McDermott spent this summer developing his second published app, Prospect’s Underground. McDermott and the rest of The U use the app to connect all Prospect students, instead of just the student section at football games.
“[It was] pretty amazing,” McDermott said. “I learned a whole lot from it. I kind of built upon what I knew from my first app and made it into this, and then I learned a lot about structuring apps from that and where I can go from there.”
Now that he’s formatted the app for Prospect use, he plans to rework it and market it as a platform any school can use as a tool for student life. Though all his coding takes more work on top of an already busy schedule, McDermott is confident it’s worth it.
“[The creativity is] the part that makes it enjoyable,” McDermott said. “If it was laid out in a way where everyone would know exactly what they were doing all the time, that would take out the necessity for coding and the love people have for it. I think that the ability and the need to solve problems through just typing lines on a computer is pretty cool.”