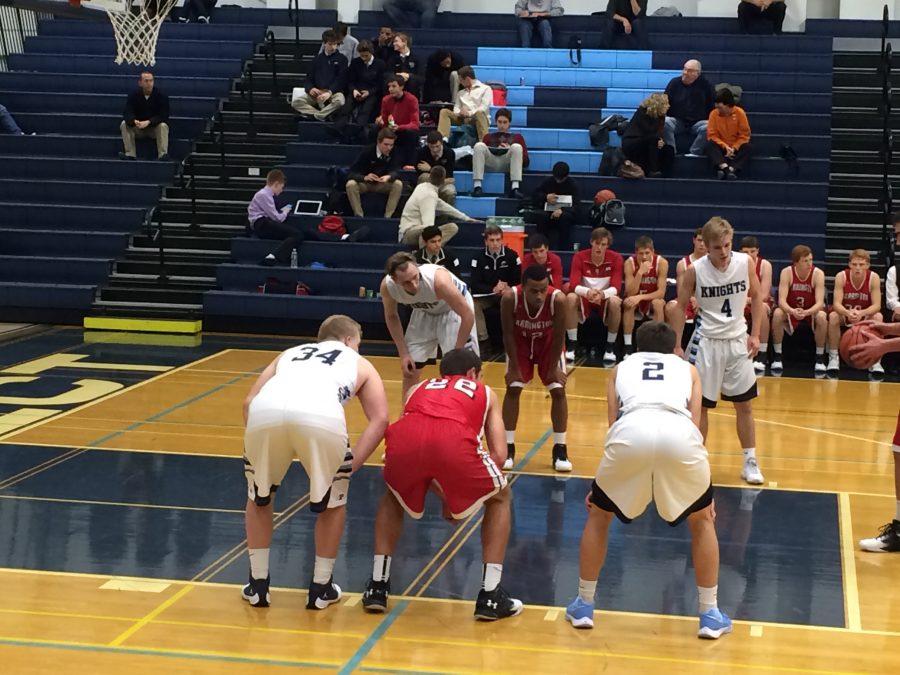 
The varsity boys’ basketball specifically scouted Barrington high school’s forward heading into their matchup Tuesday night, Dec. 8. Their practice drills consisted of restricting Barrington’s “high-post low-post” offense in order to limit their offensive rebounds. For head coach John Camardella, these drills payed off as the Knights out-rebounded the Broncos 33-18.
With the more important stat involving the number of points on the scoreboard at the end of the game, the Knights took care of business there too winning 67-50 and improving their overall record to 3-3.
Junior guard Frankie Mack led the team with 18 points.
Heading into Thursday night’s matchup with the neighboring Mustangs of Rolling Meadows (0-6), Camardella understand the importance of these home Mid-Suburban league home games.
“If you want to win the [MSL] east, you can’t lose at home,” Camardella said. “That’s the key.”
So far, the Knights have taken care of business at home as they remain 2-0 at home and 1-3 on the road.
For the visiting Mustangs team, Camardella recognizes the team has been and can be a threat along the three-point arc.
“You have to judge [the opposing team],” Camardella said. “What Meadows does [better] than anything else, they shoot the three extremely well.”
However, Camardella likes his matchups heading into the game as he has 6’ 2” senior guard Dan Marshall guarding 6’ 4” guard Jared Murphy, one of Meadows’ top scorers.
“[Marshall will] never be more than three feet from [Murphy],” Camardella said.
Marshall recognizes the challenge he faces as he is one of the Knights’ top defenders.
“Murphy is just a natural scorer,” Marshall said. “He is so fundamental with his offensive game.”
Overall, Marshall their defense as being the greatest impact on the game and in order to pull off a victory.
“[Meadows] can and will knock down any open uncontested shots,” Marshall said. “We have to communicate on defense and always have active hands.
The game remains as Marshall’s only focus looking ahead as he and Camardella would like to see their team jump out to an early conference lead with a win.
“Early on in the season everyone wants to get a couple wins to gain some momentum going into the later part of the year,” Marshall said. “Both teams are going to be excited and ready to go.”
Delete Image
Align Left
Align Center
Align Right
Align Left
Align Center
Delete Heading