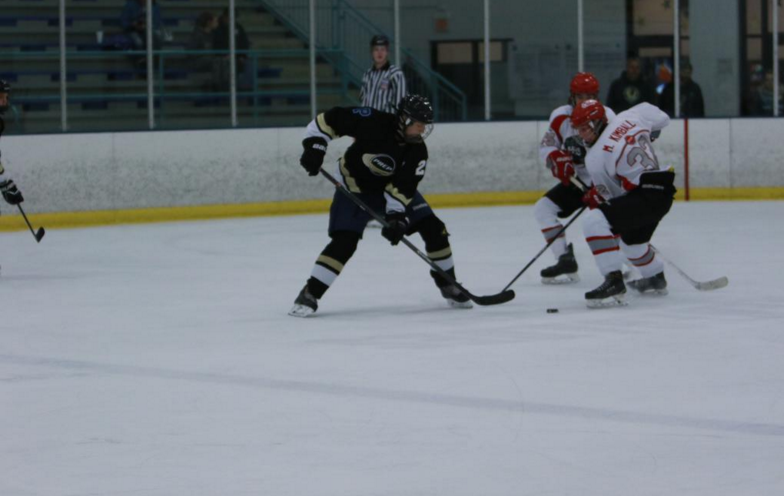 By Caroline Binley, online editor-in-chief
Senior Taylor Clark, senior Mike Weigand, senior Josh Dolan, and sophomore Cymon Wind played in Illinois High School Hockey League (IHSHL) All Star game on Sunday, Jan. 3. They represented PREP Hockey, a club team comprised of students from Prospect, Palatine, Rolling Meadows, and Elk Grove. The team is not affiliated with the high schools.
Coaches from each team were allowed to elect players from other teams to participate in the game. The four from Prospect were among the nine students total to represent the PREP Hockey. A total of 40 students selected from 15 teams played in the games.
“It was an honor,” Clark said. “This was my second time doing it, and it was a lot of fun.”


While this was a second for Clark, it was a first for Wiegand, who found out when his coach texted him.
“I was surprised when I got picked, but I was happy,” Wiegand said. “It was a pretty fun experience You got to meet different people and play with them, and play the box.”
Clark and Wiegand both won their All Star games; Clark made three assists, and his team finished with a score of 6-5, while Wiegand’s team finished 6-2-1.
These games come in addition to successful ongoing PREP seasons and a life-long love for hockey.
“[The game] is just fun to play,” Wiegand said. “It’s fun to make new friends and accomplish goals with them.”
Delete Image
Align Left
Align Center
Align Right
Align Left
Align Center
Delete Heading