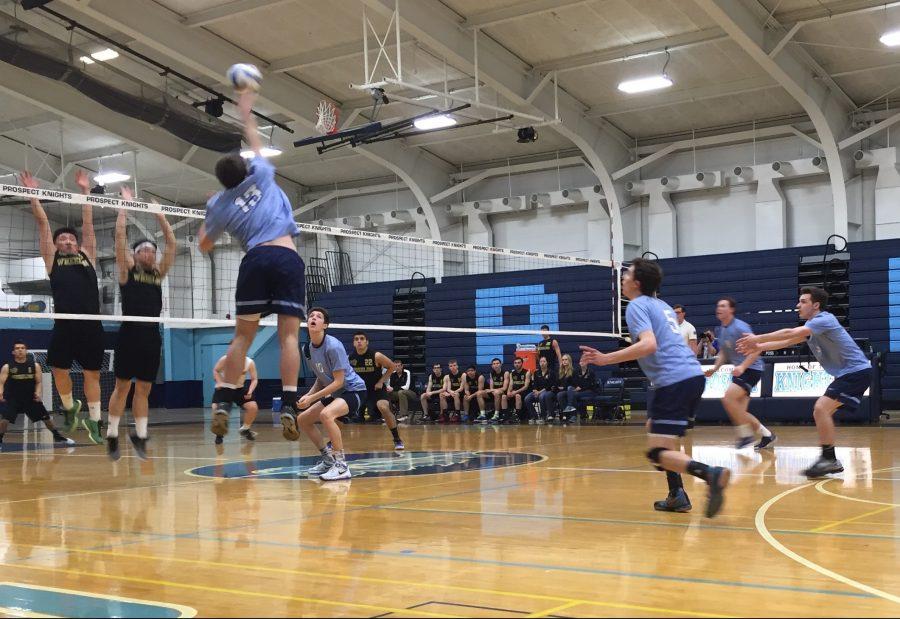 olleyball team finished off conference play with an up and down win versus Wheeling  25-8, 30-32, 25-13. The Knights were led by a superb play from senior outside hitter Liam Benson, who recorded 18 kills to go along with 14 digs.
After a dominant first game, 25-8, it seemed as if the Knights would cruise to an easy two-game victory. Head coach Peter King believes that the team came out with an aggressive mindset that set the tone for the whole match.
However, according to senior setter Scott Baackes, the team took their foot off the gas a little too much and allowed the second game to slip out of their hands.
“We kind of fell flat,” King said. “Wheeling took us when we were sleeping a little bit.”
In this game, the Knights and Wildcats were in seven deuce situations where the winner needed two consecutive points in order to win by two. A back and forth battle resulted in Wheeling coming out on top 32-30.
“It was frustrating because we played so well in the first game, so we were kind of bummed out,” Baackes said. “Then we forgot about it and realized, ‘Hey, we have another game. We’re gonna win game three.’”
And win game three they did.
According to King, the second game opened the team’s eyes to go back to their aggressiveness from game one and use it in game three. This aggressive style was on display from Benson and juniors Deegan O’Malley and Evan Sadlon, who combined for 34 kills total.
“We were able to redeem our mistakes from the second game,” Baackes said. “It was a good feeling to finish .500 in conference; it would not have felt good to go 4-6.”
Baackes thinks the team’s passing was key to winning the match because it gave him a lot of options on where to go with the ball to keep Wheeling guessing. Baackes finished with 36 assists.
“The thing we can take from this is that anybody can beat anybody,” Baackes said. “It doesn’t matter your record or skill level. If you do not bring it every game, every point, you are going to get beat.”
Looking ahead to future games, King explains that starting off with a fast pace and maintaining that throughout the whole game is something the Knights need to continue to work on.
The Knights finished with a 5-5 record in the East, putting them in third place.
“The guys will feed off [this win],” King said. “This gives a lot of confidence going forward into the postseason.”
In his senior season, Baackes hopes to come out with a strong showing at regionals, which will be hosted by Prospect.
“[Winning is] definitely doable,” Baackes said. “I can’t wait to go out there with my teammates and hopefully bring a regional title to Prospect.”