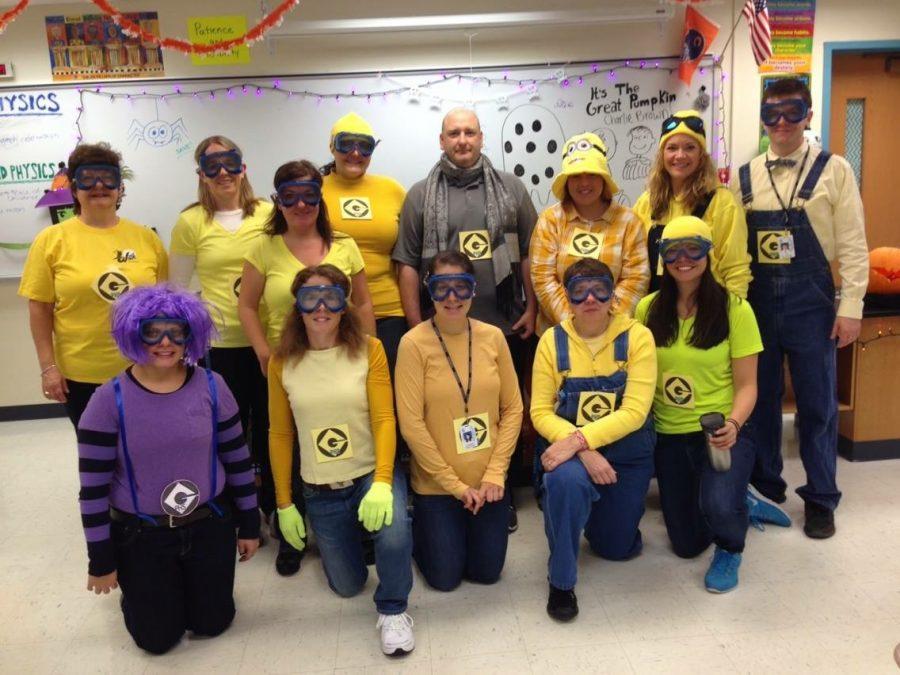 By Grace Givan, executive entertainment editors
Science teacher Nick DelBoccio paid a total of $220 for his Jedi Halloween Costume for Prospect’s Haunted High School in 2007.
DelBoccio ordered his costume online, and three weeks had passed before he decided to leave a voicemail regarding the absence of his costume. He told the supplier that the costume was needed on a certain date for a high school function. Less than a day later, DelBoccio got a phone call from the costume supplier in London saying that since the his mother was also a school teacher, he sympathized with Delboccio, and the costume was to be immediately delivered two days before the event.
Despite the hard work involved in getting costumes, DelBaccio considers Halloween his favorite holiday and loves to dress up.
According to Statistic Brain, 43.9 percent of Americans are planning to dress up on this holiday. Prospect students and staff wear costumes for Halloween, whether they make it or buy it.
However, as demonstrated by DelBoccio’s situation in 2007, nice costumes can be very expensive. Because of this, some students make their own costumes.
For example, senior Keilyn Howard spent an hour searching in Goodwill for the pieces of her costume last year. Going as Velma from “Scooby Doo,” Howard found a reddish-orange turtleneck and a tennis skirt after the hour-long search. Situations like these make Howard believe that one man’s trash can be another man’s treasure.
“It’s fun when you see something that’s perfect, and you found it [in] the most random of places,” Howard said. “You go to Goodwill and everything is kind of overwhelming at first because there is clothing everywhere, [but] if you dig for a long enough time … it’s really cool.”
As an alternative to buying a premade costume, junior Angie Hwang finds makeup as an easy way to spice up a costume. Often, she uses her 10-year-old sister, Eunis, as a test dummy for her ideas. Whenever they are both free, they experiment with makeup and find it an effective bonding experience. Hwang plans on doing her sister’s Halloween makeup this year, where her sister is going to be a burn victim.
For her costume last year, Hwang painted the bottom part of her face to look like a skeleton and wore all black instead of getting a traditional halloween costume.
“Simple is a lot easier especially if you focus on one aspect [of a costume], whether it is just the makeup or just the outfit,” Hwang said.
According to Hwang, the key to a good costume is a personal touch.
An example of this personal touch is when DelBoccio dressed as Gru from “Despicable Me” one year. Since he and Gru share a common feature, baldness, he decided to be that character when a group of science and math teachers coordinated to dress as minions three years ago.
In fact, for the past three years, some science and math teachers have coordinated a theme every Halloween, sending out emails to plan and dressing accordingly. Some of these themes have been Star Wars and Harry Potter.

Costume prices have varied greatly for DelBoccio, and he believes that paying more warrants a more quality costume (see “Breakdown of DelBoccio’s Costumes”).

“You could go all in and buy a really expensive, scary costume, and it will probably look awesome,” DelBoccio said. “Or you could buy a cheap one and I don’t know if you get the same effect. I think the more you spend, usually, the better the costume and the better material it’s made out of, absolutely.”

Hwang’s costumes have varied widely in prices as well, with her costume this year being $20 and $2 last year. However, Hwang is not the only one that restricts her spending when it comes to Halloween costumes.

Since Howard is older, and her parents do not pay for her costumes anymore, her costumes have become very inexpensive. Last year she paid a grand total of $5 for her costume as Margot Tenenbaum from “The Royal Tenenbaums,” and paid $15 this year to be Flo from Progressive.

In second grade, Howard got her most expensive costume at $40 when her whole family dressed up as vampires for their neighbors’ Halloween themed wedding.
“I think putting [on] a character that doesn’t usually exist in the world … is really cool,” DelBoccio said. “That is what fascinates kids when the go to Disneyworld and see Mickey Mouse. They are seeing something that only existed on their TV, but now it’s in real life.”

Break down of DelBoccio’s costumes:
$100 for force Fx lightsaber
$120 for hand sewn costume
$30 for the Harry Potter theme
He paid practically nothing for the Minions theme, as the costume only called for a scarf and gray shirt.