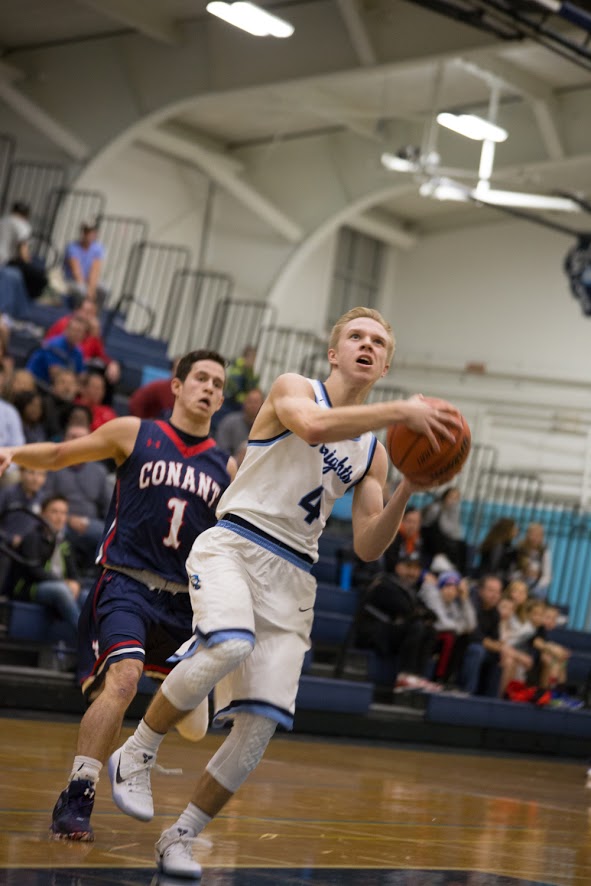 It was another rocky start for the Knights, similar to their game on Tuesday against Evanston. After the first quarter the Knights were down 25-8 and couldn’t find a way to come back.

“We just seemed to have stepped slow for the second game in a row,” Head Coach John Camardella said.

Part of the reason Prospect couldn’t get back into the game was St Viator’s offense that shot 70% (19-of-27) from the field in the first half.

“We just didn’t set the mentality that needed to be set to get a strong start to the game,” senior forward Pat McPartlin said.

This Prospect team has eight incoming juniors who haven’t played on the varsity level yet.

“When you deal with guys who are learning to adapt to the speed of the varsity, the intensity of the varsity game, that’s what you get sometimes,” Camardella said.

One junior, Ben Zellmer, stepped up big off the bench for the Knights. Zellmer had 9 points in his debut and had 6 points consecutively in the 4th quarters off of two steals.

“It’s new for [the juniors] at the varsity level, but they’ve done a great job of coming to it,” McPartlin said.

Prospect used their day off on Thanksgiving to recoup and come out with two solid wins.

“It’s just getting back to the basic fundamentals of basketball on both ends,” Camardella said.
On Nov. 24 the Knights beat Libertyville 61-56, led by senior David Swedura with 25 points. The team went on to win their second game in a row against Highland Park on Nov. 25, again led by Swedura with 16 points.
For analysis of the Knights’ games against Libertyville and Highland Park, tune into Prospect Basketball Weekly on Nov. 30.