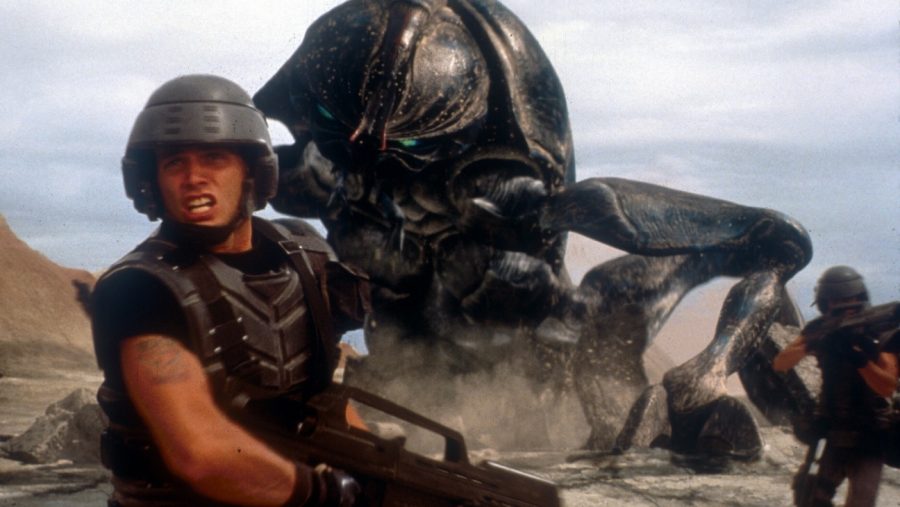 By Cole Altmayer, copy editor
Satire is a funny thing, and not usually in the way the writer intends it to be. I personally don’t see a lot of satire these days that does it for me. None of it seems subtle enough, and it’s always paired with a strong sense of ironic detachment so the audience knows for sure that they’re being sarcastic — satire these days is like going to a Las Vegas magic show, watching the magician pull a rabbit out of his hat, and then watching him promptly punt said rabbit into the audience in a desperate attempt to yank out a cheap laugh.
So while stuff on late night talk shows nowadays might not do it for me, stuff like 1997 sci-fi adventure Starship Troopers does. And when you’re getting out-subtled by a movie with a title like Starship Troopers, you could probably stand to step your game up a little.
Set in the 23rd century, Starship Troopers primarily follows the story of Johnny Rico, played by Casper Van Dien, who has aspirations of joining a futuristic military fighting force called the Mobile Infantry. His friend Carl Jenkins, played by Neil Patrick Harris, and love interest Carmen Ibanez, played by Denise Richards, also have military aspirations: in fact, in this universe, military service is required if you want to gain full citizenship under the fascist ruling regime of the Federation.
The movie initially received mixed reviews, as many critics interpreted it as a celebration of authoritarianism and the warhawk attitude. But this couldn’t be further from the truth, as Starship Troopers is actually a farcical look on how easy it is for humanity to give in to radical imperialism… all through the lens of what seems to be a B-movie shoot ‘em up lens.
Director Paul Verhoeven, most notable for 1987’s RoboCop, takes a lot of stylistic risks with Troopers that pay back in troves. Visually, the movie is made to feel like a vapid television drama in its first half, with very even lighting, saturated color schemes, and meticulous use of wide angles. It’s no coincidence that both Van Dien and Richards were also stars of Beverly Hills, 90210: the movie intentionally mocks up the 90210 style in order to represent the superficiality and lack of sophistication inherent in authoritarian societies.
The second half of the movie turns into an ultra-macho war film, where Rico and company are slaughtering wave after wave of “Arachnids,” which are alien bug creatures that are constantly portrayed as irredeemable monsters, despite some implications later in the film that there is quite a bit more to their culture than meets the eye. This is also a pretty smart representation of how quickly societies are willing to brand certain groups as an incomprehensible “other” that needs to be stopped at all costs.
If anything, the worst parts of the movie are the parts that rely entirely on action sequences: the effects surprisingly hold up pretty well, but the actual action set-pieces are nothing notable. It’s more of the themes surrounding the action and the subtle ways that they’re conveyed that make the movie stand out. It also does not feel condescending or preachy it the way it conveys its morals, and does a good job of balancing the darker implications of the Starship Troopers universe with dashes of light humor and clever characterization.
Troopers is a silly action movie, but it’s a silly action movie with a heart of gold and something to say. There’s something bizarrely surreal about seeing it for the first time: it’s like watching a piece of propaganda made in an alternate universe. And if the goal of a science fiction movie is to whisk the viewer into another world beyond imagination, then Starship Troopers should be considered an all-time great… Even if that world beyond imagination is, well, less than ideal.