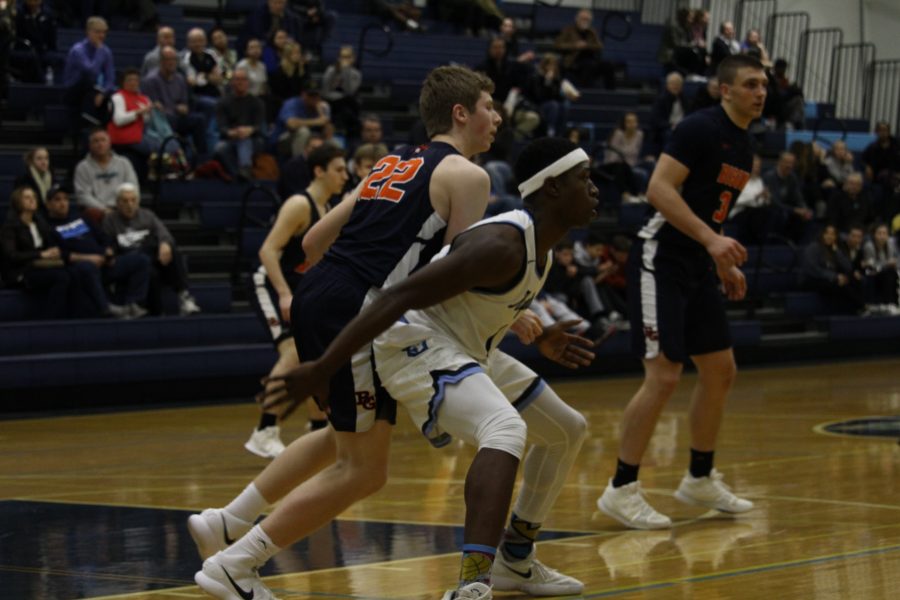 The Knights were on a mission since the opening tip. In a game that senior Tim Lussenhop said he had circled on his calendar all year, Prospect was in control all game.
Lead by junior Jon Kreidler who scored a career high 18 points, 10 in the first quarter, Prospect defeated the preseason MSL East champion Buffalo Grove Bison 67-46.
“I think we just came out ready to play and started fast,” Kreidler said.
Shooting 9-18 from beyond the arc, the Knights offense was clicking no matter who was shooting.
“Offensively we were as dialed in as we were coming off that Glenbrook South game,” head coach John Camardella said. “We are shooting the ball really well right now as a team across the board, the ball is moving.”
In this game, senior Johnny Czeslawski, who was 3-4 from three, scored 15 points. Senior David Swedura added 11 points to go along with 5 assists and 3 steals. Lussenhop added 9 points and dished out 7 assists for the second game in a row.
“I think we just spaced the floor well,” Kreidler said. “We have so many guys that can play so many different positions.”
Camardella credits co-captains Swedura and Lussenhop for their unselfish play and ability to recognize what the defense is giving them.
“It has never mattered who contributes for us,” Camardella said. “Since the first game it hasn’t mattered to any of them who scored.”
A perfect example of this would be when Lussenhop only took one shot against Glenbrook South, but had 7 rebounds and 7 assists.
“The way teams have scouted us and played against us, we cannot be a one dimensional team,” Camardella said. “We have to be able to play against anyone, any zone, man defense.”
The difference in tonight’s game came during a 9-0 run in the third quarter, according to Camardella. Senior Jalen McLachlan had just picked up his third foul, and the Bison already had a size advantage with 6-foot-5-inch Mac Camardo and 6-foot-3-inch Tom Trieb.
“With Camardo and Trieb we just try to out-hustle them and box out every play,” Kreidler said. “They are big bodies and you just got to beat them to spots.”
However, the Knights 1-3-1 defense didn’t allow the Bison to get comfortable and dump it down low to Camardo and Trieb. Instead, Swedura hit a three-pointer, followed by two three-pointers from Czeslawski. The Bison were forced to call a timeout down 52-33.
“I am proud of that stretch we went on in the 3rd quarter to break the game open,” Camardella said. “We ran three or four different looks at them to try to set up a trap, attack them at different times, different spots.”
This win moved the Knights to 7-0 in the MSL East with a matchup against Rolling Meadows up next week. The Mustangs are the only MSL East team the Knights have not beaten by more than 15 points.
“That game is huge,” Camardella said. “It is next game and we have an entire week to prep for them. I know our guys are excited and we are getting closer, but the mentality is just go a game at a time.”
For Kreidler, the mentality is the same: start fast.

“It is not going to be easy to beat them, we just have to come out ready to play, start fast, hustle. It’s a big game.”