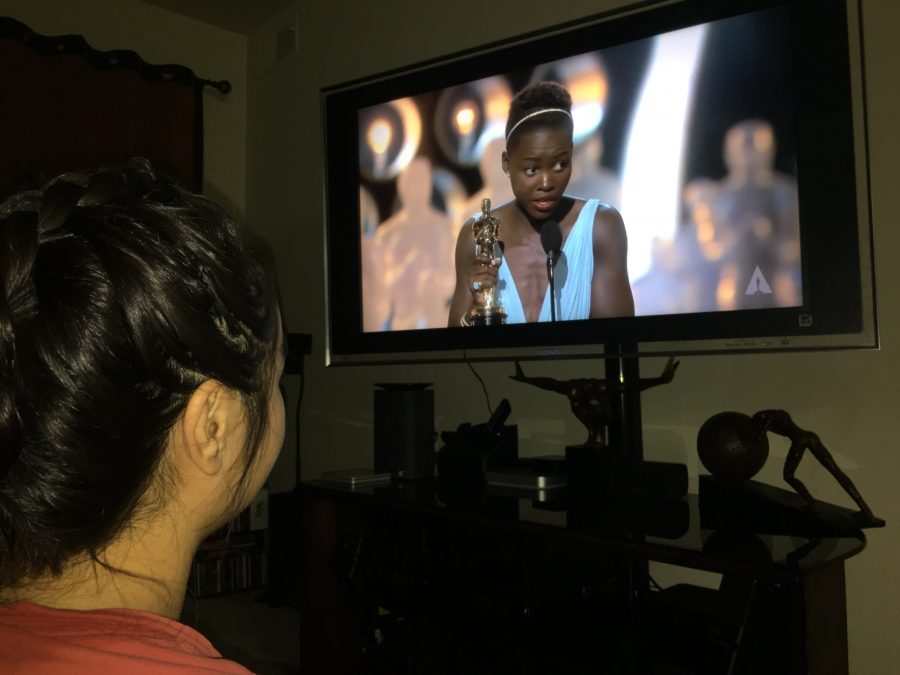 By Blanca Estrada, staff writer
It was Feb. 26, 2017.  Junior Jacqueline Galliano was sitting in her couch, wearing her pajamas, with the TV turned to ABC.  The remote was in her hands and her phone was in the inside arm of the sofa.  Her iPhone kept on buzzing with notifications from Snapchat; however, she disregarded them.
Galliano’s eyes were glued to her flat screen TV as Emma Stone received the award for Best Actress in a Leading Role for La La Land at the 89th Academy Awards.
At the end of Stone’s acceptance speech, Galliano was left speechless.  Not just because Stone was her favorite actress, but because Galliano is an aspiring actress.
“When Emma won Best Actress in a Leading Role in La La Land it inspired me to keep on following my dreams of performing,” said Galliano.
Since that day, she’s kept that image in her mind like so many other aspiring actors.
Although Galliano’s dreams of acting started during her sophomore year, she’s been performing since she was young.
At five years old, Galliano was dancing ballet in front of a crowd.  She’s currently involved in Speech Team, Show Choir, Spring Musical, Comedy Sportz, and dances for the Mount Prospect Park District.
“I just love performing and making people smile, laugh and kind of just give them an escape from the outside world,” said Galliano.
She hopes her perseverance will pay off in the future when she wins an Oscar and a Tony.
However, she might have to wait a while to see her dreams come true.
The Washington Post researched the frequent age at in which actors win Oscars.  They found out males are likely to win Best Actor if they are over 40 and females over 30.  Males typically win Best Supporting Actor if they are over 50 and females 40.
Nevertheless, all this might change.
Timothee Chalamet (22) has been nominated for Best Actor at the Academy Awards for Call Me by Your Name.  The last time a young individual was nominated for this category was Mickey Rooney (24) in 1940 for Babes in Arms.
Chalamet lies in a category with distinguished actors such as Denzel Washington, Daniel Day-Lewis, Daniel Kaluuya and Gary Oldman.
Although this is not the first time a young actor has been nominated for an Oscar, Chalamet nomination is inspiring young actors.
Junior Samworlee Nyain said, “Timothee Chalamet can accomplish something, that even at my age I’m not doing, shows you can do anything at any age,” ID Speaker here.
Nonetheless, the probability of becoming a prosperous actor is very low and the competition is intense in the acting industry.
“Young actors who want to get into the business have to be driven and committed to the journey, willing to accept a lot of rejection, able to be honest and real not only while performing but also when approaching the art form… it is a difficult path that is sometimes sparked by talent while at other times led by simply luck,” said Fine Arts Director Jeremy Morton.
Numerous Oscar winners have struggled to get where they are.  Morgan Freeman was starving to make a living and Halle Berry stayed at a homeless shelter during her early 20’s.  Regardless of their struggles, each has managed to win an Oscar for their arduous work.
Although people are conscious acting has its struggles, many, such as senior Emma Knott, are determined to pursue their dreams.
Senior Emma Knott was aware acting is an arduous career and debated about pursuing another career.
“When I think about it… I have always done it and I don’t really want to stop and I really couldn’t picture myself not doing it,” said Knott.
Although Knott has been acting since she was 7, she decided to major in advertising and minor in theater.  She is still deciding between Marquette, Madison and Butler but decided to double major as a safety net.
In spite of acting being a hard career, young people are inspired when watching actors receive awards.
Leonardo DiCaprio has been nominated by the Academy Awards since 1994 but received his first Oscar in 2016.  He has gone home empty handed numerous times but has kept on doing what he loves.
“Even when an actor hasn’t won an Oscar, they never give up and continue to create movies, which makes people feel that anyone can make a difference in performing and still not win,” said Galliano.
First time Oscar winners aren’t the only people influencing young individuals.
Minority actors also motivate.
There’ve been points in history were minorities lacked representation in the Oscars and the nominations weren’t diverse.
88 years have passed, since the Oscars first started, and only 16 minority actors have been recognized awarded by the Academy Awards.
“Me, as a kid, I would want to watch somebody who looks like me… so I can be ‘Oh I can achieve the goals she did or I can be like that’… It makes kids of color feel like they are not important or never get that big break,” said Nyain.
So when Lupita Nyong’o, an African American actress, won Best Supporting Actress for 12 Years a Slave at the 85th Academy Awards, Nyain was inspired.
“I love the speech Lupita Nyong’o gave.  It showed how anybody can achieve their dreams no matter what race, gender, or age you are,” said Nyain.
Nyong’o acceptance speech was described as “emotional” by CBS.  She took that time to thank her family and inspire kids watching the Oscars.
“When I look down at this golden statue, may it remind me and every little child that no matter where you’re from, your dreams are valid,” said Nyong’o.