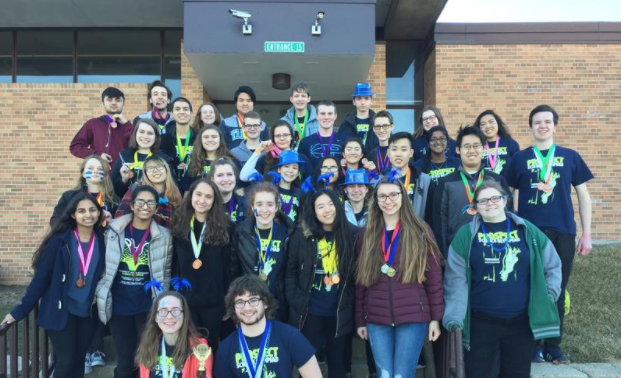 By Nicholes Schauer, executive visuals editor
During the regional science olympiad competition on March 17, 2018 at Harper Community College Prospect’s team placed third and won a total of 57 medals during the competition.
The ranking of third advanced the team into the next state competition at the University of Illinois. Because the team rarely achieves such success at regionals, the competition was a big success for the team.
“It was really special for us,” said Junior Ada Taghavizadeh.
The science olympiad competition is a series of 23 engineering and science based events wherein teams sponsored by their schools compete against each other.
“We were really, really nervous,” said Junior Mary Stahlman.
The Prospect team placed higher than other well acclaimed teams from schools such as the Illinois Math and Science Academy. Stahlman herself competed in regionals and placed first in the “mission impossible” competitive event, where students were tasked with building rube goldberg machines in the smallest amount of space possible.
Despite her shaky nerves, Stahlman contributes her success and preparation to classes such as A.P. Physics and the go-getter attitudes of her team captains. Stahlman attributed much of the team’s success to the teamwork displayed by many of her fellow peers.
“Science Olympiad is a club for people to come together,” Taghavizadeh said.