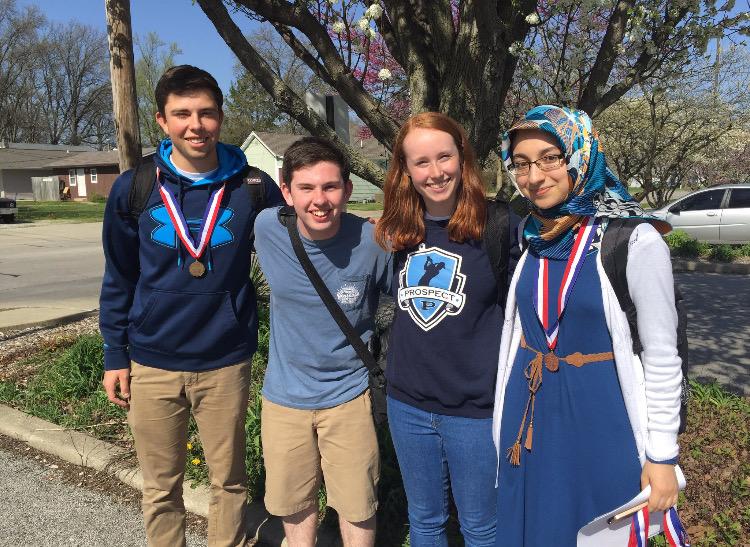 By Ryan Kupperman, copy editor
After senior Jack Ankony’s sports writing entry got lost at sectionals, newspaper advisor Jason Block had to call the IHSA organization and beg them to look the story over again. After agreeing that Ankony’s story was worthy of placing in sectionals, the IHSA allowed him to compete in the state competition. On Friday, April 27, Ankony placed first in the state for sports writing and represented Prospect’s state journalism team alongside seniors Cassidy Delahunty and Zach Miller and juniors Kate Hyland and Ayse Eldes.
As the second best finish in school history, the Prospector took fourth place as a team at the state competition. Delahunty, who broke a Prospector record, placed third in two different categories at the state level. In addition, Eldes placed fourth in Copy Editing.
According to Block, the journalism program typically has about eight, nine or 10 kids qualify for state. Block says that to have only five kids place in the top three at sectionals and move on to place in four out of six categories at state is “unheard of.” Block particularly remembers seeing all of the other teams of 10 to 15 kids next to his team of five.
“Truthfully there are some years where we go down [to state] and I’m like ‘you know if things fall right maybe we can finish top ten in the state. Maybe we can even finish top five. This was not one of those years for me,” Block said. “I went down there saying ‘I hope these kids do well. Let’s have fun and see what happens … and then names started to get called.”
Although Block says this year’s success will not change any preparation in class for years to come, he does hope it will bring more excitement for future competitions.
“We kind of operate in a bubble, where we don’t see a ton of other schools’ work and we don’t get a whole lot of outside feedback,. We are in our own little world here,” Block said. “We have an idea that we are pretty good at this and we know what we are doing, but when you get that confirmation at a big stage like [state], it does let you know that you are doing some pretty special work.”