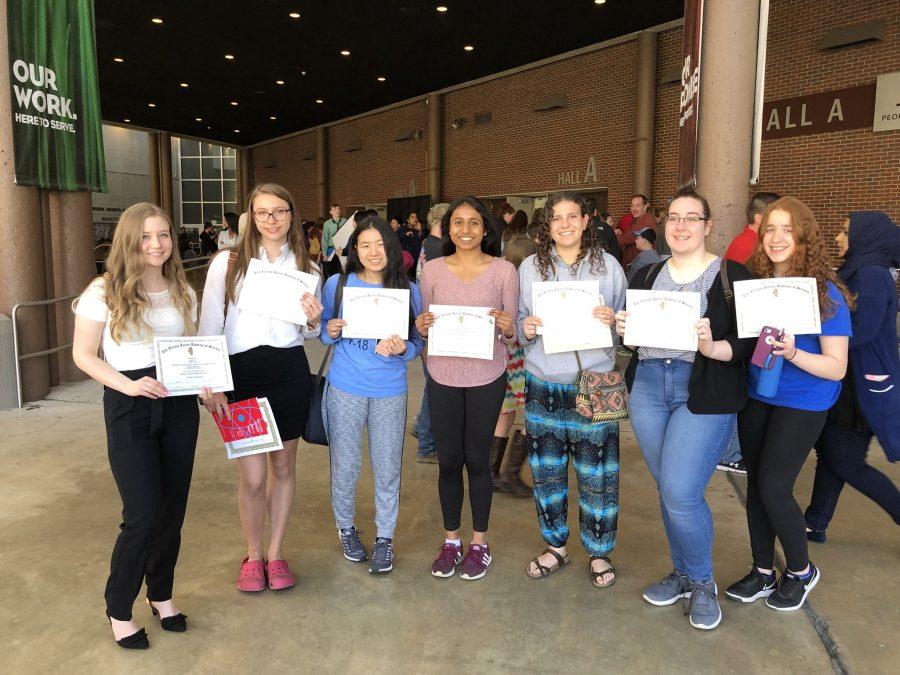 By Jenna Koch, executive entertainment editor
Six out of seven competitors at the Illinois Junior Academy of Sciences (IJAS) science fair received the gold award on their research projects on April 28th. The seven competitors also had to get a 93/100 on their projects at the regional level to qualify for state.
Prospect also took home 11 total awards from our seven competitors, including different types of organizations’ awards such as the American Nuclear Society Excellence in Science award, earned by junior Alice Getmanchuk, who also won silver for her research on supercapacitors.
Supercapacitors, according to Getmanchuk, are a new way of storing energy.
“Batteries store energy with a chemical reaction, but supercapacitors physically separate the energy,” Getmanchuk said.
She wanted to research this because she really enjoyed science and wanted to try doing some sort of research. Getmanchuk also wanted to prepare for college, since she plans on studying engineering.
Getmanchuk along with the other competitors have been working on their projects since the beginning of the year in their independent research class. The class is run by science teacher Katie Page and is during zero hour.
The students choose their project based on what interests them, and some students take several months to narrow down their topic and begin research.
“[The students] have to come up with what I call a ‘so what?’ factor,” Page said.
Page says that many students choose a topic that affects them personally, such as researching a disease that affects one of their family members.
“The best part of the experience is just learning how to conduct research by yourself, but also presenting it to others,” Getmanchuk said. “… also working with a mentor a lot who’s helping with the project is just amazing.”