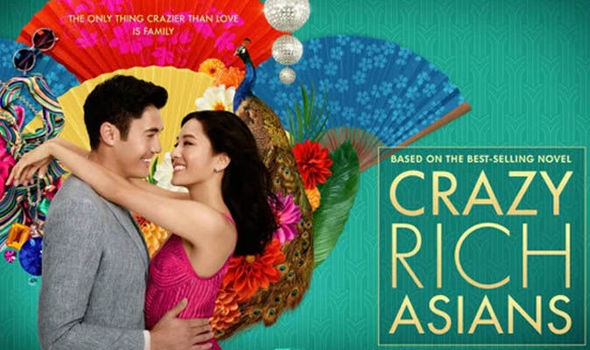 By Grace Baldino, news writer
Catholicism never seemed like something to be scared of before. My grandfather had some interesting stories of the nuns at his Catholic school but none of them made an entire movie theater seemingly jump out of their seats. However, as I settled down for Crazy, Rich Asians, The Nun got everyone out of their seats. Not exactly the best setup for a cheesy, predictable, yet admirable romance movie.
The movie immediately shows you just how crazy rich the Young family is. The main antagonist, Eleanor Young, played by Michelle Yeoh, arrives in a private London hotel, late and drenched with a little Nick Young, the love interest played by Henry Golding, and his family. Snobby hoteliers turn them away and with one phone call, the Youngs buy the hotel. Snappy one-liners and some shocked employees complete the opening scene, setting the tone for the rest of the movie. Because as the title states, this family is crazy, rich, and Asian.
Fast forward, we meet the main protagonist, Rachel Chu, played by Constance Wu. She teaches a class on economics by gambling with one of her students. Definitely not a conventional way for someone to learn about spending and saving money, but it is New York City. After class Rachel and Nick go to a cafe where, in about thirty seconds, a family friend takes a picture of Nick, and by the power of smartphones, his mother finds out that he is dating someone, who is not rich. Gasp!
When they arrive in Singapore, Rachel is shocked by how fancy everything is and what ensues is a kind of crazy, and flaunts in your face the 30 million dollars spent on this production. With awkward family meetings and a couple mishaps, Rachel gets a break to go visit her college roommate, who is also rich.
Goh Peik Lin, played by Awkwafina, introduces Rachel to her family, which is about the most cringe scene in the entire movie. There are other moments, but in the span of one minute, Lin’s father says “Eat your nuggets. There are starving children in America,” and when encouraged to say something to Rachel, Lin’s brother immediately says “I love you”. If you find that off-putting, he continuously takes pictures of Rachel throughout the movie.
A makeover later, there is a very forgettable party, and a very uncomfortable introduction to Mrs. Young, we are introduced to a collection of forgettable secondary characters. The middle forty-five minutes of this movie are unremarkable, with the exception of a gutted fish on Rachel’s hotel bed during the bachelorette party. I didn’t realize that dead fish were so insulting, and I still don’t think they are.
The rest is pretty by the numbers. Drama, kissing, boring subplots, and some more drama. I predicted the end twenty minutes before it happened. The main reason why I don’t hate this movie is the cinematography involved. The sets and costumes especially are incredible and this is the first American-made movies with an all Asian cast in a long time. While it can be very cheesy at times, the moments of hilarity and amazing design make this is a good movie for anyone seeking a movie you don’t have to think about too much to enjoy.
[socialpoll id=”2516300″]