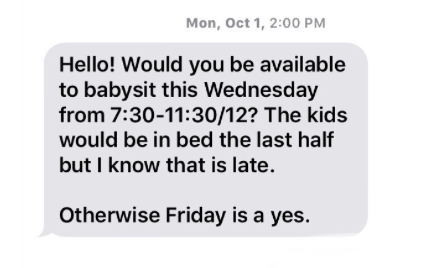 By Mackenzie Noelle, Executive Features Editor
It was 11:30 p.m. on Wednesday, Oct. 3., when I was woken by the kids’ mom I was babysitting for in her middle child’s bed. Since the six-year-old boy wasn’t asleep by 10:00 p.m., I layed in his bed with him where his feet made bumps in the blankets until he fell asleep. As a result, we both did.
According to Nationwide Children’s, after puberty there is a biological shift in an adolescent’s internal clock of about two hours, meaning that a teenager who used to fall asleep at 9:00 p.m. will now not be able to fall asleep until 11:00 p.m..
Sophomore Audrey Duetsch, a dancer at the Mt. Prospect Park District can relate to that, since as she got older, her dance classes got later. On Thursday, Oct. 4, Duetsch was at the RecPlex until 10:00 p.m., when the class, Impulse Dance Ensemble rehearsal, was scheduled to end at 9:30 p.m. and she still had to drive home and shower, aside from still getting the essentials done before she went to bed. The rehearsal had run late due to Impulse’s shows that following weekend, but Duetsch didn’t mind.
“I am more tired on days that I have activities later at night,” Duetsch said. “But it is definitely still worth it.”