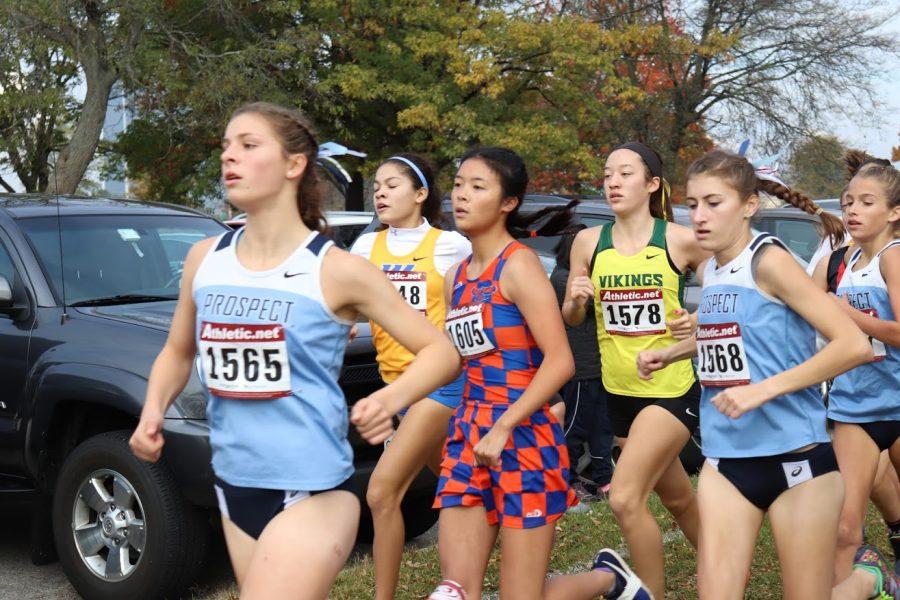 By Anthony Santangelo, sports editor
History was made at Busse Woods on Oct. 27 as the girls’ cross country team took home their second sectional title in the team’s history. With the victory, this is the first time the varsity team won conference, regionals and sectionals all in the same year.
To add on to their many accomplishments this year, the team ran an eight-second split, which is almost unheard of according to senior Cori Drew.
“I think [the win] is great because we were able to work as a team,” senior Jenna Baltes said. “We came out here with a goal, and we accomplished [it].”
The team continues to excel with the sectional win, but a lot of the success has to do with the relationships that the girls have.
“I look at [the seniors] as my leadership role models because I know that I am going to be a leader next year,” junior Emily Hubbard said.
The team started fast with sophomore Reese Lettow finishing her first mile in under six minutes. Despite the fast start for the girls, they were able to maintain strides with each other and come out victorious.
“I think [the win] gives us a boost of confidence,” Baltes said. “We know what we are capable of, and mentally, we keep focused and get ready for what’s to come.”
Baltes thinks that continuing to keep a positive mindset and maintaining a solid split will allow them to succeed as they had to Peoria for state on Nov. 3.
“Knowing it’s my senior year, the last year, it’s sad,” senior Julia O’Grady said. “I wouldn’t trade [running cross country] for the world. It’s a really cool feeling to have the opportunity to run at prospect…I feel really honored to be a part of the Prospect community.”