From Playbook To Textbook: Nabolotny comes to Prospect 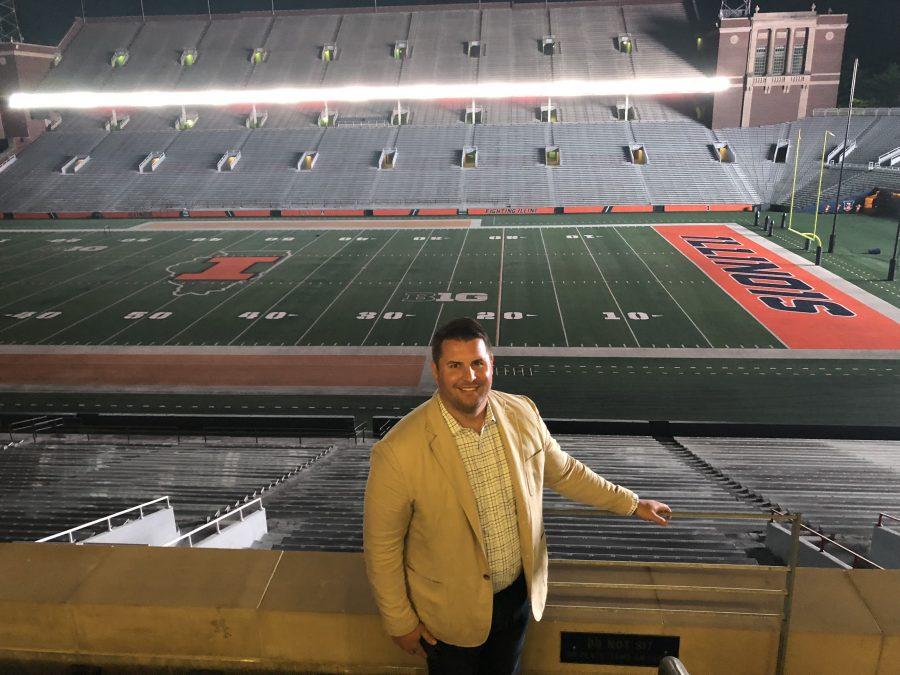 By Shannon McGovern, Staff Writer
Shrieking voices and stampeding feet echoed throughout the streets of University of Illinois’ campus. Thousands gathered together in the streets of Champaign, IL to commemorate one special day for the Fighting Illini football team. It was midnight, but the celebration had just begun as the team rolled into campus with victory on their faces.
They returned home from the hardest game of the season against the number one team in the nation at the time: The Ohio State Buckeyes. It was a tough fight, but in the end, the Illini were able to pull through and add one more big win to their record. Mike Nabolotny, a tight end and offensive lineman for the University of Illinois, recalled that moment when he and his team clinched a spot in the Rose Bowl.
“It was an honor and privilege to play the game and be a part of that whole experience,” Nabolotny said. “I felt kind of like a celebrity, even as a 21 year-old, and realized how big of an impact the game has on its fans. It was pretty special.”
Football was not always a part of Nabolotny’s youth; instead, it was basketball. While he was growing up, Nabolotny put forth all his energy on the skills of dribbling, shooting, and passing. He always considered being a part of the football world, being a big kid and all, but his parents were not so keen on the idea of their child being sacked over a layer of pigskin. Thus, his induction into football did not start until his first year of high school.
he picked  the game up quickly and soon became devoted to the sport. It was the adrenaline rush that came with setting foot on the turf for game day that kept him coming back for more.
“Football has been a very strong part of my background,” Nabolotny said. “It is a real passion of mine.”
With no intention of retiring his gear after high school, he knew playing Division I football at UIUC would be the right decision. He was concerned with the time commitment it would take to be a part of the athletic program, and how he would cope with his major on top of it.  While his finance classes caused many late nights, Nabolotny kept up with his academics and athletics all four years.
When graduation day came, he was bittersweet about moving on, but also ready to start the next chapter in his life. He had earned a degree in finance and used it to start working a typical office job, but soon realized the 9:00-5:00 gig was not his forte. After working for three years, he decided to change course and picked up something that he always found interesting: history.
Back at school again, Nabolotny was able to receive a degree in history from Northeastern University and start teaching at the high school level. To begin his new career, he student taught at Buffalo Grove High School, was a long term substitute at Elk Grove High School, then worked at Glenbrook North High School for 5 years. After getting a taste of what it was like teaching young adults, he knew he was in the right place.
While changing careers would feel abrupt to most people, history made Nabolotny feel right at home.
Growing up, he had always heard the stories of his Ukrainian grandparents that met in a refugee camp during WWII, and what it was like immigrating to the United States. This story sparked an interest in history, along with the stories his sisters would tell about the teaching profession.
As his new career began, football never left Nabolotny’s side. He continued to pursue his love for the sport and new teaching interests by becoming a football coach at several of his schools, including Prospect. His expertise of the sport and dedication to each and every one of the players made an impact on the the lives of his athletes and fellow coaching staff.
Dominic Cannon, assistant coach of the freshman football team at Prospect, believes Nabolotny has played a huge part in getting the team where it is today.
“I call him the gentle giant. He’s such a big guy, but his demeanor with kids is just so genuine, and you can see how great he is with all of them,” Cannon said.
Nabolotny truly loves the chance he gets to impact young adults in  whom he sees so much promise. He notices how teaching and coaching share many similarities when it comes to supporting kids, and how quickly he can become an inspiration if he shows some needed compassion. There was nothing like the moment during Nabolotny’s teaching career than when a student wrote two pages about how he impacted his life during a time of need.
“Hearing [the impact you had] from a student and knowing that you’re making a difference would probably be the ultimate reward,” Nabolotny said.
Nabolotny has also reaped other rewards during his teaching career. At the top of the list would be meeting his wife, Rachelwhile teaching at Glenbrook North. It was the classic football player meets cheerleader romance, albeit as coaches instead of players. now are expecting their first baby in February. During his new path to fatherhood, he cannot help but feel overjoyed.
Though he is new member of the Prospect community, he already feels at home. His first experience seeing the powder throw at the Prospect homecoming game was definitely exciting.  The columbia blue, navy, and white shades that filled the bleachers that September night sparked many memories that Nabolotny remembered from his own football career.
As he looks ahead, Nabolotny is excited for every chance to make a difference, both in the classroom and on the field.
“What excites me the most is that you get to hear the roar [the students] achieve at the end of their educational career, and see the impact that you had on their life,” Nabolotny said.