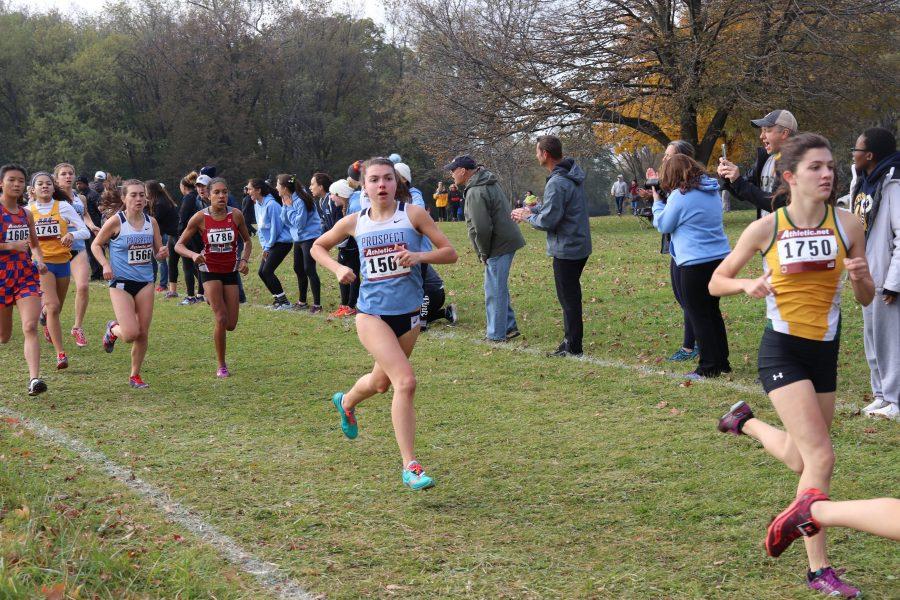 By Rick Lytle, sports editor
Girls cross country capped off a historic season by placing 11th at the state meet. Head coach Pete Wintermute says that the team was very calm before the race, which he feels helped their performance.
“The group we had this year has a lot of big meet experience, so I think that atmosphere was pretty calm. They went into this weekend very confident in what they had achieved and what they could achieve,” said Wintermute.
Four of Prospect’s seven state runners this year ran at state last year, improving from an 18th place finish last year. The team had also won conference, regionals, and sectionals this year giving them the confidence they needed. It was the first time the team had ever won all three in the same year.
Freshman Audrey Ginsburg finished in 49th place with a time of 17:50, the best for the Knights. Wintermute said she is running a 3 mile time faster this year than she was running a two mile time in junior high. The back end of her races has been her strongest, actually running her last mile faster than her second mile at state.
Seniors Julia O’Grady and Jenna Baltes came in next for Prospect, running 17:59 and 18:03. O’Grady finished 102 places higher than last year, and shaved 44 seconds off her time at state last year.
Prospect relied on what they have been counting on all year, a low split, to help their team. The split is the time from a team’s 1st runner to their 5th runner, which was only 22 seconds for Prospect, better than any of the ten teams that finished in front of them.
“Running five girls inside 22 seconds at the state meet is pretty awesome, and a big reason these girls ended up in 11th place,” said Wintermute.
O’Grady says that she can’t help but think about how they were just four points outside the top 10, but says they have to be satisfied with how they did.
“As a senior looking back, 11th is pretty good. I have to be proud of how far I and the team have come, from freshman and sophomore year not even making it to state as a team, to last year being 18th, and progressing this year to 11th,” said O’Grady.