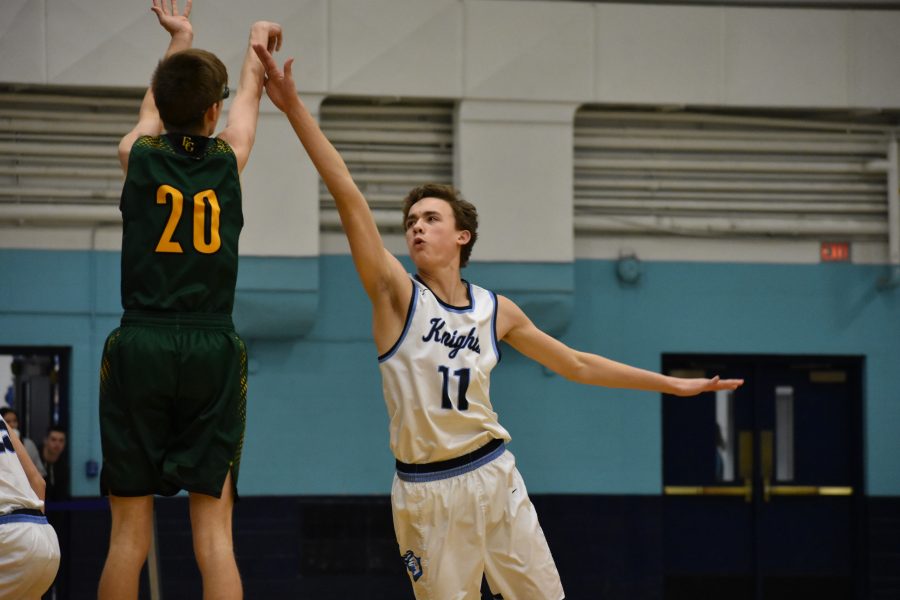 By Rick Lytle, sports editor
Boys varsity basketball was able to hold off Elk Grove in a physical, scrappy game to earn a 52-43 conference win.
“Our guys understand that you only get ten [division] games, and each one counts to try and get to the conference final. And, you can’t lose at home. We always joke that the recipe is you have to steal a couple on the road, but you can’t lose at home,” said Head Coach John Camardella.
The Grenadiers were able to hang with Prospect for most of the game, until Senior Michael Slupski hit two threes between the four and three minute mark in the fourth quarter to put Prospect up 10. Slupski finished the day with nine points.
Slupski also played a key role in Prospect’s biggest defensive challenge coming into the night, guarding 6’ 8” Ryne Singsank. Prospect had a variety of players tasked with guarding Singsank throughout the game, including Senior Grant Hiskes and Junior Rob Lombardo.
They were able to hold Singsank to 15 points, the only player to score in double digits for Elk Grove. He took seven of his eight shots inside the paint, missing three of those shots. Head Coach John Camardella credits much of the game plan for guarding Singsank to coach Brad Rathe.
“We call him our defensive guru. He’s always responsible for our defensive matchups and adjustments,” said Camardella.
With a dominant player to anchor middle of Elk Grove’s defense, Prospect had to look elsewhere for points. 20 of those points came from Senior Sam Murray, who went 5-10 from behind the arc. Senior Ben Zellmer also went 3-5 from three, finishing the night with 15, following up a dominant performance against Barrington where he scored 24.
Quick ball movement and the ability to find the open man helped the Knights shoot 11-25 from three point range as a team. They only took 11 shots from inside the arc, making 5 and finishing the day with a 46% field goal percentage. Camardella liked the ball movement he saw.
“The thing I always say is the ball doesn’t stick, that means that no one catches it and holds it. It’s catching and moving,” said Camardella
After a first quarter dominated by defense, with both teams combining for only 14 points, the Knights exploded with a 19 point second quarter. They took a five point lead into the half, their largest of the game up to that point.
After some more halftime adjustments, the Knights looked like they might just run away with it in the third quarter. Prospect forced a ten second violation, followed by threes from Senior Ben Miller and Murray, and put themselves up nine points.
A three point response from Elk Grove’s Michael Achanzar silenced the crowd, and brought Elk Grove back to a two-possession game. The Grenadiers were able to tie the game with 2:30 left in the third quarter, but were never able to take the lead or come closer the rest of the game. Prospect dominated the fourth quarter, holding Singsank to only two points.
Prospect improved to 2-0 in conference with the win, and will play their next conference matchup at Hersey on Dec. 14.