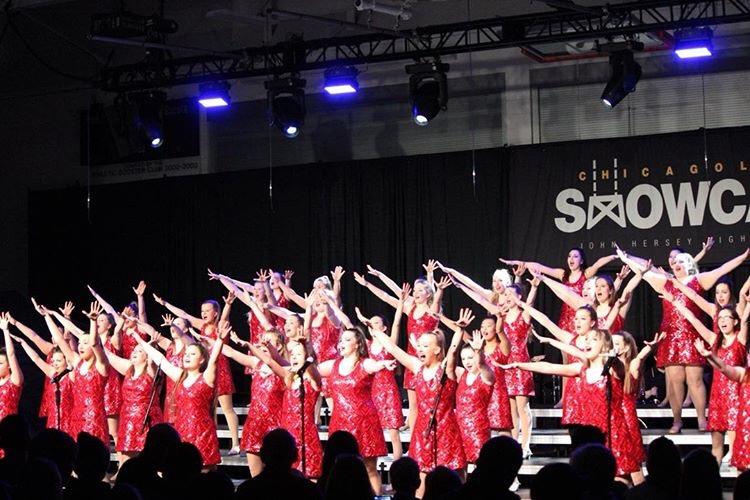 By Elizabeth Keane, Features Editor
Prom: a night to remember. This year’s Mixed Company show choir group impressed the judges and audience at the Chicagoland Showcase this past weekend with Prom as their theme. Featuring many lifts, flips and even a breakdancing solo, the group placed sixth among eight other groups. Company placed third.
Senior dance captain Emmett Knee originally came up with this year’s show theme, further collaborating with his co-dance captain senior Molly McDermott and choir director Jen Troiano to create this 17 minute show.
The show features a multitude of songs such as “Dancing in the Street” by Martha & The Vandellas, a mash-up of “A Night to Remember” from High School Musical and “Big Night” by Big Time Rush, “Can You Do This” by Aloe Blacc and “Last Dance” by Donna Summer. Their ballad is a mash-up of “In The Still of The Night” by Fred Parris and The Satins and “Perfect” by Ed Sheeran.
Sophomore Cody Bolithon had his first show choir solo in “In The Still of The Night” this year that achieved his win of best male soloist.
“It wasn’t too difficult [to learn my solo] because it was a song I knew and had heard on the radio,” Bolithon said. “But it was definitely nerve-wracking to know that I was going to have to sing it in front of huge groups of people.”
Bolithon and McDermott both agree that this season has been a large improvement from last year. Bolithon tries to focus more on the growth of the group rather than how they place at competitions and is proud of how far they have come collectively.
“I don’t really get nervous before going onstage because I know I’m just there to have fun with my friends and show off this great show,” Bolithon said.
However, McDermott finds that she gets the most nervous while pre-setting her microphone and corsage that she puts on halfway through the show. According to McDermott, this time backstage is when the competition begins to feel real.
But even in the stress of competitions, Bolithon feels the undeniable support of his teammates as they all grow closer as a group.
“It feels so good after you’re done [performing,]” McDermott said. “You put so much work into [the show] all year and then get to show everyone how hard you’ve worked.”
[ngg src=”galleries” ids=”44″ display=”basic_slideshow”]