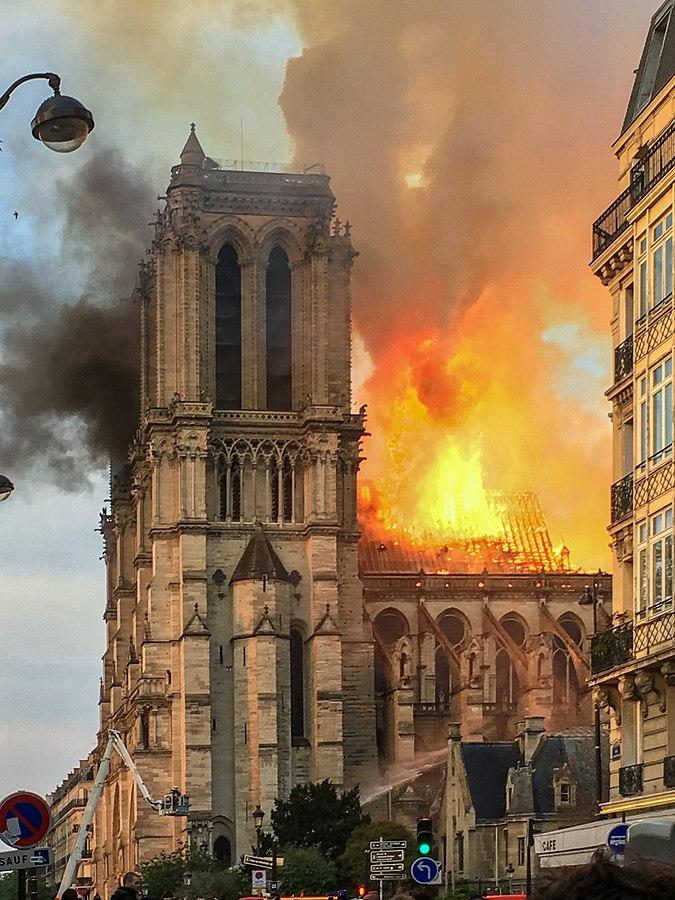 By Genevieve Karutz, Executive Opinion Editor
A huge fire engulfed the iconic Notre Dame Cathedral in Paris on Monday evening. As of Monday night, the spire had fallen and damage continued to worsen as hundreds of firefighters worked to save one of Paris’ most historic buildings.
Jean-Claude Gallet, the Paris fire brigade commander, said that firefighters had saved the structure of Notre Dame Cathedral, including its two famous rectangular towers. One firefighter was seriously injured.
Parisians looked on in horror from the streets below.
French teacher Jenna Sandstead was shocked to hear the news.
“I’m devastated by the fire. Heartbroken, sad, upset,” Sandstead said.
The fire broke out in the cathedral’s attic at 6:50 p.m. local time.  The fire is still under investigation, but police speculate it may be related to a $12 million renovation project.
French President Emmanuel Macron wrote on Twitter: “Our Lady of Paris is in flames. Emotion of a whole nation.  My thoughts are with all the Catholics and all the French. Like all our compatriots, I am sad tonight to see this part of us burn.”
Shortly after the fire broke out, President Trump wrote on Twitter: “So horrible to watch the massive fire at Notre Dame Cathedral in Paris. Perhaps flying water tankers could be used to put it out. Must act quickly!”
Notre Dame Cathedral houses irreplaceable works of art and artifacts, and attracts about 13 million tourists each year–more than the Eiffel Tower. Pope Alexander III began construction on the cathedral in 1163. It was finally completed in 1345.
Sanstead believes that the Notre Dame has become a symbol of the country, thus synonymous with Paris.
“Many generations have appreciated Notre Dame for its architectural, historical and religious beauty.
As of Tuesday the 16th, Frédéric Létoffé, a restoration expert, told CNN that it would take anywhere between 10 to 15 years to fully repair the cathedral.