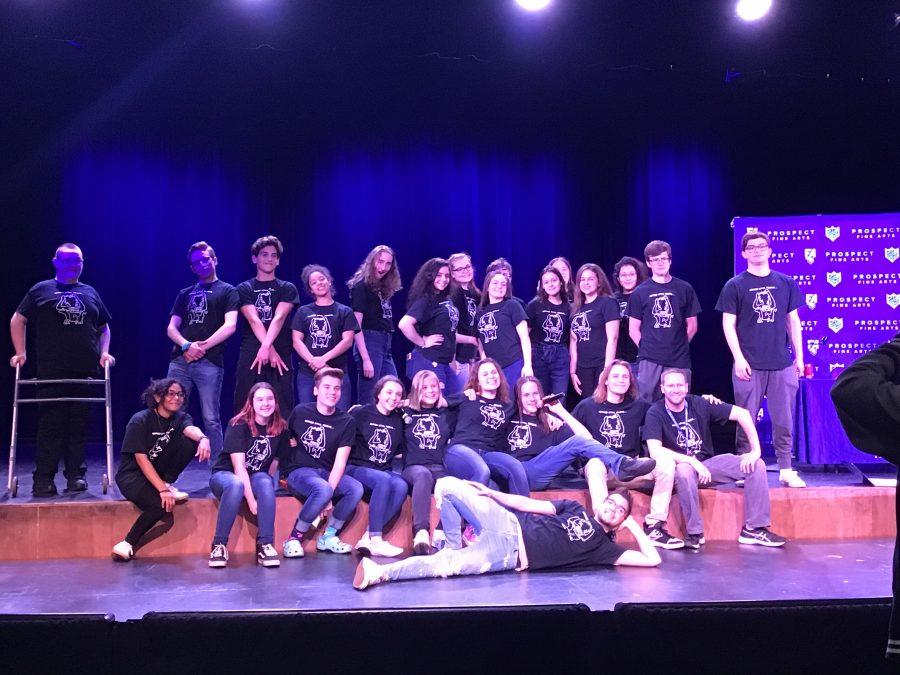 By Olivia Kim, Associate Online Editor-in-Chief
Crazy, loud, quirky, creative, and rambunctious are all words that Senior Molly Ruhl used to describe her Advanced Acting class and the cast of the production of “Crazy Town”.
On May 20, the Advanced Acting class performed its end-of-the-semester production that it had been preparing for a month and a half. The show was set as a compilation of multiple humorous skits displaying the unique lives of outrageous characters all living in Crazy Town.
Ruhl is a student in Advanced Acting, taking the role of the director of this production. She chose this script because she believes it exemplifies the nature of the class performing it.
“I know the kids in my class,” Ruhl said. “[The script] fits this kind of crazy, weird personality of the class.”
Freshman Maya Kusalovic is a student in Advanced Acting as well and played both a gangster and a news anchor in the skits. She thinks that the play comes naturally to her classmates and contributes to the performance.
“It embodies our class and how we’re very loose, energetic, and sometimes all over the place,” Kusalovic said. “Everybody’s giving what they think is funny.”
Kusalovic normally doesn’t play characters as eccentric as the ones she played in this production. However, she took the challenge and enjoyed doing so for the entertainment it provides the audience and herself.
“It shows that theater doesn’t have to be boring,” Kusalovic said.
Kusalovic knows that she will use the performing skills that she has learned from this class in the future, and will continue her appreciation for acting which has lasted since she was five years old. She accredits a big part of her passion of theater to the people she shares it with.
“I love theater and I love the people who are in it,” Kusalovic said.