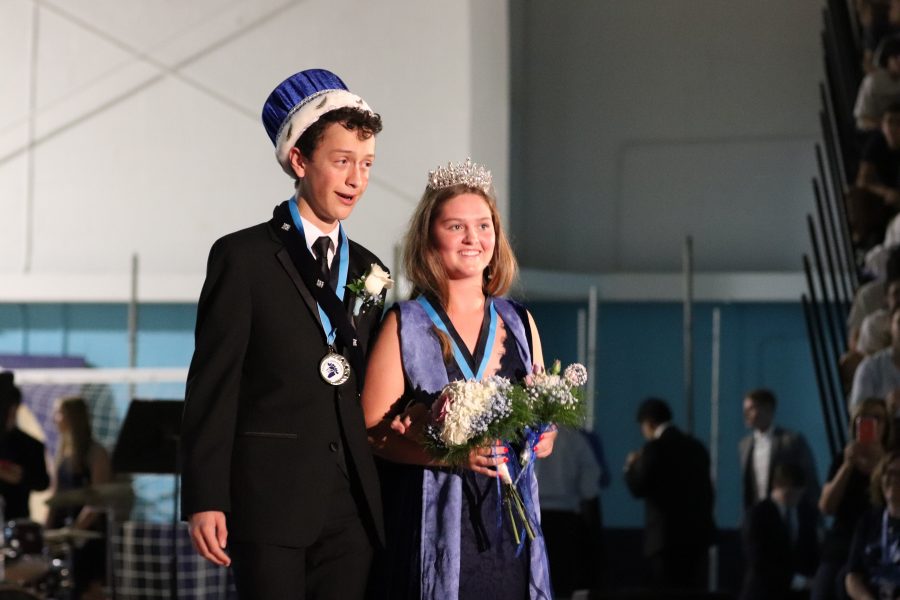 By Elizabeth Keane, Copy Editor
The 2019 Knightimes Homecoming Court was complete with ten stellar students representing the best aspects of the student body. The girls nominated were seniors Ellen Sherwood, Michelle Kies, Sarah Eyles, Faith Bondarowicz and Ella Knee who was crowned as the queen at the pep assembly last Friday. Boy nominees included seniors Ben Hitesman, Aiden Rodriguez, John Moellenkamp and Luke Sparreo with Alex Lasky taking the title of king.
Knee is a part of girls’ golf, ultimate frisbee on the team Fullsend, girls’ water polo, Knights’ Way and the Underground. She believes that her heavy involvement at Prospect gained her some votes from the student body.
“This year I [have] definitely been more involved in the Underground,” Knee said. “So maybe underclassmen recognized me from football games or videos… I try to make myself known in the school and participate in a lot of activities.”
According to Knee, although she didn’t campaign herself, teacher Brad Rathe did most of her campaigning for her through Twitter and her friends helped a lot too. Knee wasn’t expecting to win, but she was excited to find out that other students had decided to vote for her out of the other people on the court.
Lasky was completely caught off guard when Librarian Christie Sylvester came to his first period class to tell him that he had been nominated for the court; like Knee, this nomination was something that he was not expecting.
“I still can’t even wrap my brain around [the fact that I won]…” Lasky said. “I was walking down the aisle and I felt like I was going to throw up all over the entire Honor Guard… I don’t remember what happened. I remember coming forward and smiling, but it was just a rush of feeling so incredibly happy and humbled… it was insane.”
Lasky maintained an attitude of humbleness throughout the voting process because he was proud of everyone on the court, wanting to leave the decision up in the air for students to decide.
“It’s incredibly important for me to [be kind to everyone I cross paths with],” Lasky said. “I want to be respected as a person and for the LGBTQ+ community… I think it’s amazing that two gay people were on the court and one of them won.”