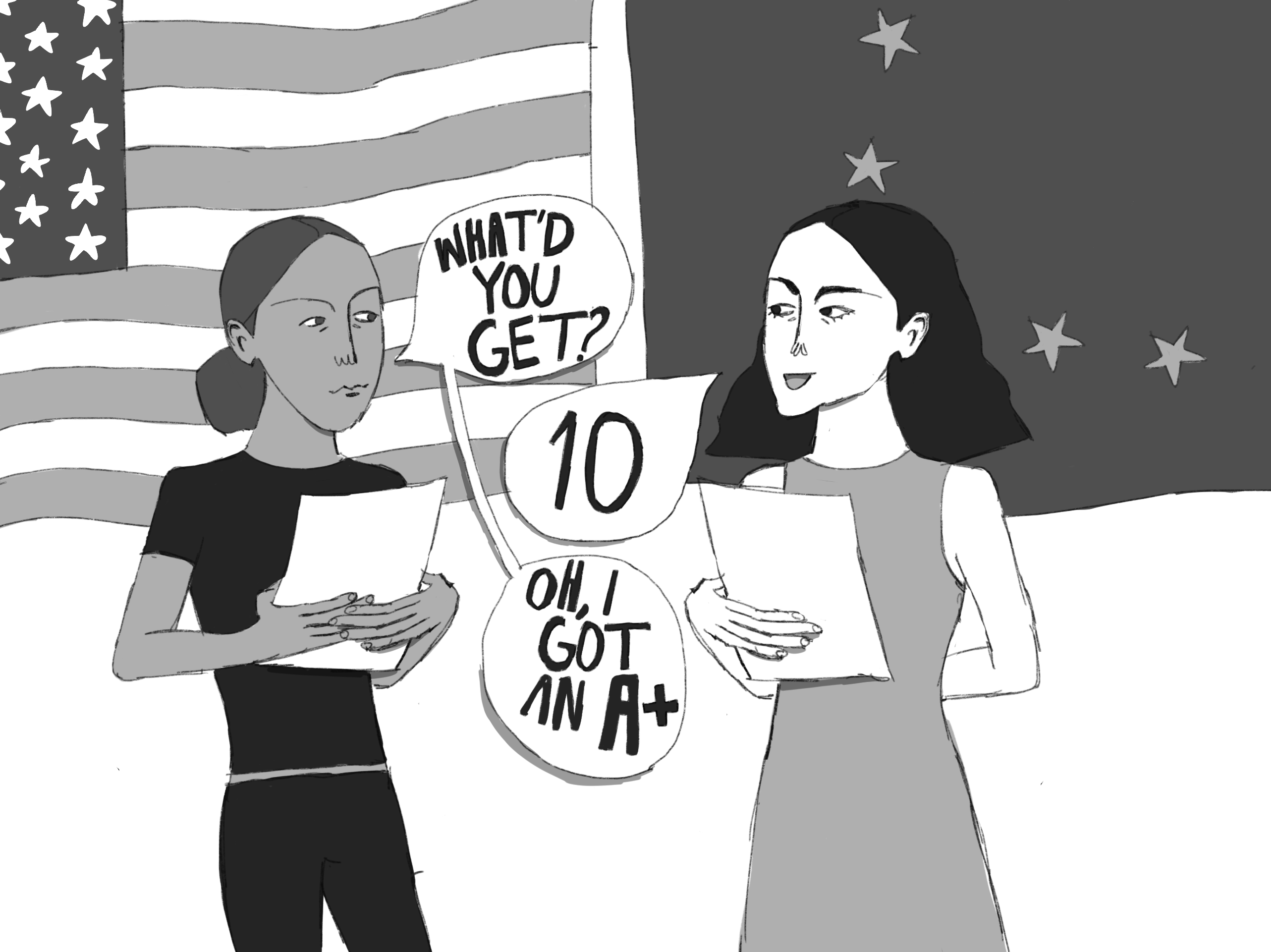 Two years ago, after she finished her freshman year at Prospect, 15-year-old Sara Michelini bought a ticket to Nottingham, England knowing it was going to be quite a transition moving over the pond from her Arlington Heights home. Michelini’s family packed up for Nottingham when her dad was offered a temporary assignment at a British pharmacy called the Walgreens Boots Alliance. Not only was she leaving the friends she knew from school behind, but also the educational system she had been used to her entire life.

“I felt very anxious when I realized how different the school systems were, but I was also excited to prove to myself that I was capable of the adjustment,” Michelini said.

This adjustment was far from easy for Michelini, considering she was moved to an entirely different country and had such little time to adapt before school started back up again.

There are many significant differences between schooling in America compared to that of Europe. Whether it’s the amount of homework that the students get, the course load they have to endure or the outside activities they join, the two are very distinct. Each country’s different culture and political system plays a role in impacting how the educational system is run.

Michelini currently attends a private school in Nottingham called Trent College. At Trent, she has to go to school six days a week, Monday through Friday from 8:30 a.m. to 3 p.m., and Saturday from 8:30 a.m. to noon. She is currently in her last year of secondary school (year 11), since secondary school in the UK starts at the age of 11 and ends at age 16. Once students pass secondary school, or also known as their “General Certificate of Secondary Education” (GCSE) years, they can either decide to go further into their schooling or enter the workforce.

“Having to go to school on Saturdays was definitely a change,” Michelini said. “You can’t even think about going out on a Friday night without being absolutely dead the next morning.”

The UK is not the only European country that has this block scheduling; students in Spain also have varying schedules, going to different classes each day. And while Michelini has to go to school six days a week, making it even more stressful for her, students in Spain have to endure this same kind of stress, but through a test that basically decides their future.

Marina Orradre, a Spaniard from the Prospect exchange last year, feels that secondary school in Spain, which is like the U.S.’ version of high school, can be extremely stressful, especially the testing.

“High school in Spain is ultra-competitive,” Orradre said. “You need to get the highest grade you can because the grade you need depends on the degree you want.”

Spain has an exam called the Bachillerato, which is a test that students take in secondary school that determines if they’re proficient enough to obtain a job in the career that they want. According to Orradre, this exam is extremely stressful, as it basically determines the kids’ futures and tells them if they are qualified enough to become that doctor, lawyer or engineer that they were dreaming of pursuing. The educational system is much different from the U.S in that grades are based off of a point system that ranges from one to 14 where students can only go into career fields that reflect their point average.

“Having this kind of point system makes it hard for people to reach [their potential] even when they would be great at a job, because they evaluate you not only on subjects for their degree, but also other [subjects] that have nothing to do with the career,” Orradre said.

In France, students in secondary school also have to take this exam (called the Baccalauréat in French) in order to determine what universities they can attend after secondary school. Overall, French education is taken very seriously and can be unlike American education in many ways, according to John Bauer, an English teacher at the French school Section Internationale De Séveres.

“School in America is child-centered; it’s focused on the needs, desires and aspirations of the child — that is, his or her emotional needs,” said Bauer. “Whereas education in France is almost exclusively focused on students’ intellectual needs,”

Bauer notices the intensity of French education and the impact that it has on his students. It seems that secondary school tries to weed students out who are not as dedicated as others and puts more focus on the grades you receive, rather than the emotional needs of a student. Bauer says that because of this “fundamental misapprehension at the heart of the French system,” there are almost 250,000 students that dropout of school a year. Consequently, these kids then must find a way to get back into school or eventually start working.

In French schooling, there is not nearly as much attention given to student resources, such as American schools having counselors and therapists that students can refer to when they are feeling stressed out.

“The French educational system makes kids pretty darn tough, in both a good and a bad way,” Bauer said.

Because of this primary focus on the intellectual aspect of its students, French sports and activities are not as big of a concern as they are in the U.S. In Spain and England, PE is dedicated to a sport that you participate in, and if you don’t do a sport, you just exercise with the rest of the students.

Bauer finds this fixation on student sports in the U.S. to be almost exclusive to the students. He notices that students in France have more of an opportunity to be their own person when it comes to school spirit and activities, as it does not seem as forced as it is in the U.S where students attend pep assemblies and have the homecoming football game — where students are highly encouraged to show their school spirit through chanting and the use of a school mascot.

From an American’s point of view, it is hard to understand having school without counselors, sports practices every day of the week, or even school dances, but in Europe, it’s exactly the opposite. While one kid in the U.S. is at his fifth football practice for the week, another kid his age in Europe could be taking the test that determines the rest of his future.

“It’s quite clear to me that a country’s educational system is instrumental in creating the culture of that society,” Bauer said.