Boys soccer gets a first round upset over Niles West 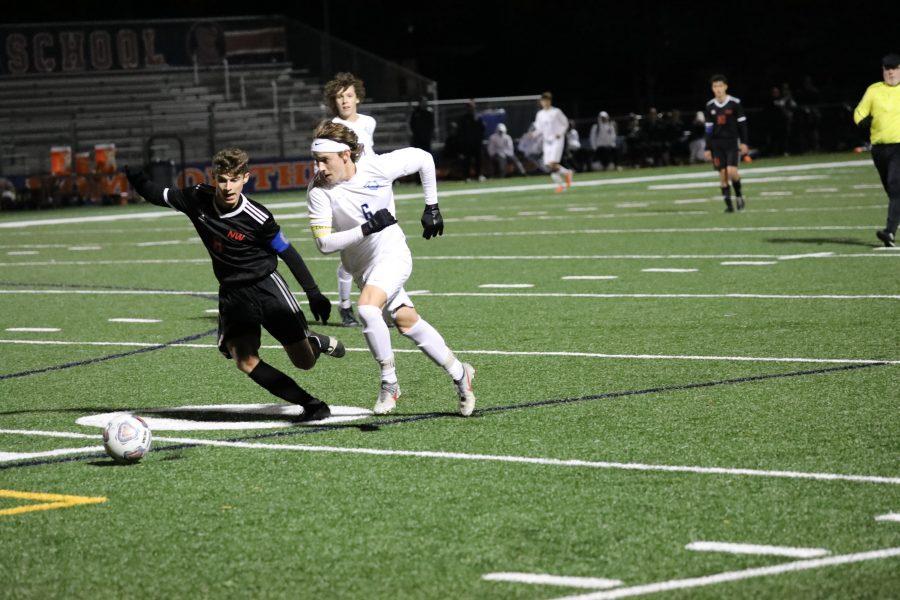 (photo courtesy of Tony Kafkakis)
By Jake Terpins, Sports Editor
As the Boys’ Varsity Soccer team charges the field and jumps on Jonny Keane and Szymon Mocarski, the celebration had begun.
Earlier that day, the soccer team prepared to travel to Evanston High School for the first round of Regionals where they would be taking on the 6 seed, Niles West.
With Prospect being the 11 seed, Keane was feeling many emotions going into the game. He was nervous because they were the lower seed, but he was very excited to play because there was no pressure considering they were the lower seed.
Going into this game, Head Coach Michael Andrews prepared by watching a lot of film on Niles West and checking out who they like to target.
Prospect jumped out early with a goal from Eryk Limanowka just four minutes into the game. According to Keane, that first goal was one of the most important parts of the game.
“Getting that first goal really assured us that this was possible, and we can do this,” Keane stated.
Niles West answered back to Prospect as they tied it up at 1-1 on a free kick by Ilija Jerinic later in the first half.
From there on out, it was a deadlock. Both defenses breaking up plays and doing everything they could to keep the game tied.
As the regulation ended still tied 1-1 they went into the first overtime. It stayed a deadlock until the first scoring chance by Jerinic, he kicked a quick shot and midfielder Bryan Morrison made a body stop.
After that, there were no more big plays until the second overtime ended. They would then move onto a shootout.
As Morarski lays out he sticks his right trial leg up and deflects the ball. It was the only stop in that shootout.
Keane, the fifth and final shooter for the Knights, just had to bury his penalty shot for the win. Keane shot right, the keeper dove the other way, and Prospect had upset Niles West.
After the celebration at the field, the Knights enjoyed their ride home on the bus.
“The atmosphere was amazing. We were all chanting upset season, and we were just blasting music,” Keane said.
Prospect will take on the 3 seed Evanston on Saturday, Oct. 24, at five p.m. at Evanston High School in the Regional Finals.