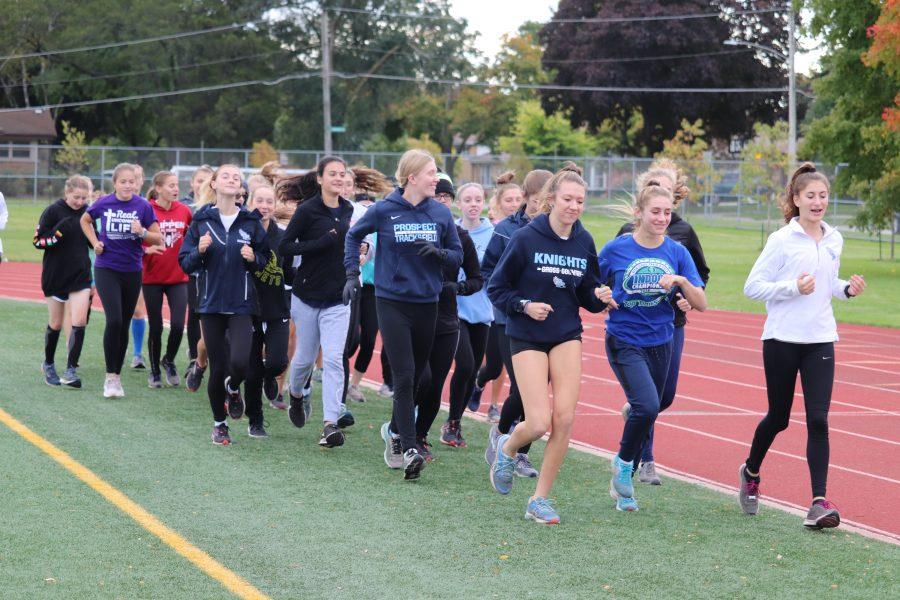 Going up against 18 teams and 140 athletes, Prospect Girls’ Cross Country dominated the course at the IHSA Sectionals on November 2nd, winning the meet, and advancing them to the state finals. The Sectional Meet took place at Busse Woods.

Wintermute believes that the Sectional win was a total team effort, with their top 5 athletes being able to score them low points, but the key to the victory was their ability as a team to place seven runners before Barrington’s number five runner. They scored a total of 87 points, securing their one point win over  Barrington.

The girls benefited from a good start, and were hooked up and running together in their packs from the beginning of the race. At the one and two mile marks, they maintained their strength and were moving up. “On the move” in the middle of races has been a point of emphasis for this team all season, and that was exactly what the girls did last week.

Sophomore Audrey Ginsberg, finishing in 15th with a time of 18:49.8 said, “I knew it was gonna get hard at some point so I think it’s important to make sure you run for your teammates and stay strong mentally, and just like, embrace the mud that was there and try to enjoy it.”

Ginsberg believes the most helpful part of training was doing intervals because they help you feel more confident while going into the race.

Freshman Cam Kalaway, finishing in 14th overall with a time of 18:49.6, is hoping for a top 10 finish this weekend, and believes that they have worked very hard.

“We were all nervous, but we were pretty confident because we had done so well this season,” Kalaway said. Wintermute believes they have had a good week of practice together and are going to enjoy another weekend together with the opportunity to compete with the best at state.

“This is a fun group to work with,” Wintermute said. “They are dedicated, work hard, and they have continued to set goals and elevate the expectations of the program. The seniors have a huge part in creating the culture that exists in our program and I cannot thank them enough for all they have given our program for the past four years.”

The state meet will take place at Detweiller Park in Peoria, on November 9th at 1:00 p.m.