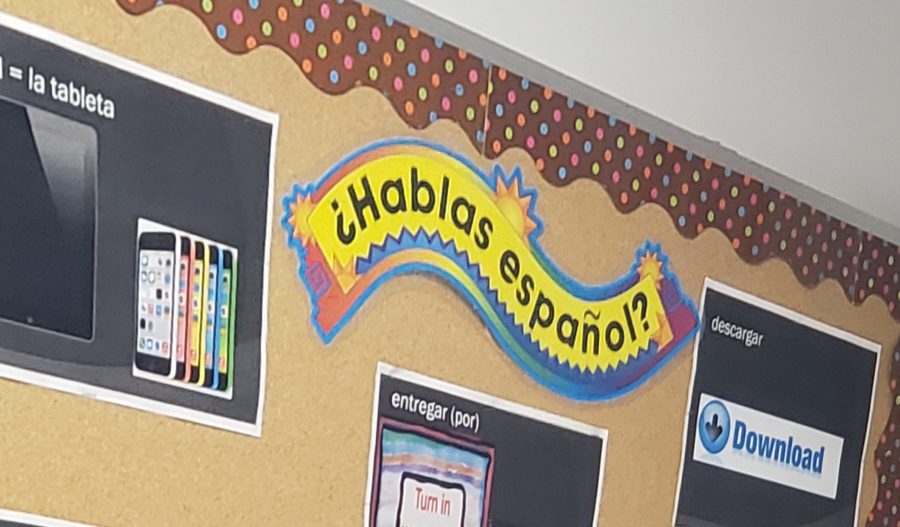 Image from a classroom that teaches Spanish Honors 4, the course that will be changed to College Intermediate Spanish. (photo by Olivia Kim)

Starting in the 2020-2021 school year, Spanish students in District 214 will be offered a new course called College Intermediate Spanish. It will replace Honors Spanish 4 in the current curriculum.

Students can then take AP Spanish Language and Culture as seniors for up to 17 hours of college credit at in-state or out-of-state schools, depending on each school’s policy.  Schools that award credit hours for a score of 3 or more on the AP exam include University of Illinois-Urbana Champaign, Northern Illinois University, University of Kentucky, and Miami University.

Another new feature for next year is that both College Intermediate Spanish and its successor, AP Spanish Language and Culture, will have weighted grades. Students will earn 5.0 for an A, 4.0 for a B and so on.

According to Spanish teacher Leigh Sapp, in past years, students felt they were forced to relearn Spanish in college and were not being rewarded for the work they put into high school Spanish.“It’s a huge respect for our curriculum at Prospect High School,” Sapp said.Sapp believes this new Spanish curriculum will give students the college credit they rightly earned.