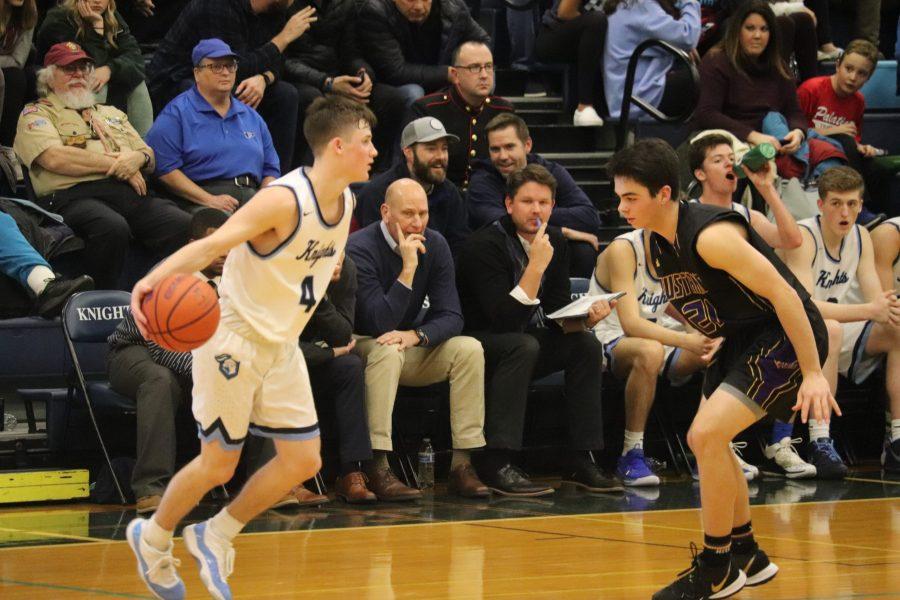 Rolling Meadows was up 47-36 at the end of the third quarter and seemed just about ready to blow the game open. Prospect, playing in their third MSL East matchup of the season, kept battling. To start the quarter, Prospect went on a 9-3 run, capped off by a Marco Shaw three pointer to bring the game to 50-45 with 4:30 to play.

Prospect’s offense had no let down the rest of the fourth quarter, exploding for 24 points, and coming as close as 63-60 with 14 seconds remaining. But, the Mustangs and Max Christie were able to do just enough to pull out a 65-60 victory on Friday Dec. 20 at Jean Walker Fieldhouse.

“I was really proud of our sophomore point guard Owen Schneider, he had the best game of his varsity career. He’s really coming into his own…he was great,” Camardella said.

Max Christie, Rolling Meadows star junior, made his presence known early in the game. After beating his defender outside the arc, Christie took one dribble to get to the rim and throw down a dunk over two Prospect defenders, electrifying the Rolling Meadows side of the gym. Christie was the most efficient player on the court, finishing with 25 points while shooting 10 of 14. If you wanted to summarize the first half in one play, it would have been Christie’s 30-foot jump shot to end the half that came off of an inbound with two seconds remaining.

Both Daniel Sobkowicz and Jonah Ogunsanya scored 12 points for the Mustangs and were a combined 3 of 8 from behind the 3-point arc. The Mustangs as a team shot 47% from three.

Prospect, on the flipside, shot just 29% from three, and only 9% if you remove the 4 of 6 from behind the 3-point arc that Shaw shot. Brian Dini was the only Prospect player who finished with a positive +/- and also contributed 12 points.

“This is now two games in a row at home, both Buffalo Grove and Rolling Meadows have some really good players, and we’ve dug ourselves a hole at half,” Camardella said. Prospect, similar to the game last Friday, Dec 13 against Buffalo Grove, was down 29-23 at half against Rolling Meadows.

The Knights (4-5, 1-2) have no divisional games over winter break, but play in the Wheeling Hardwood Classic.