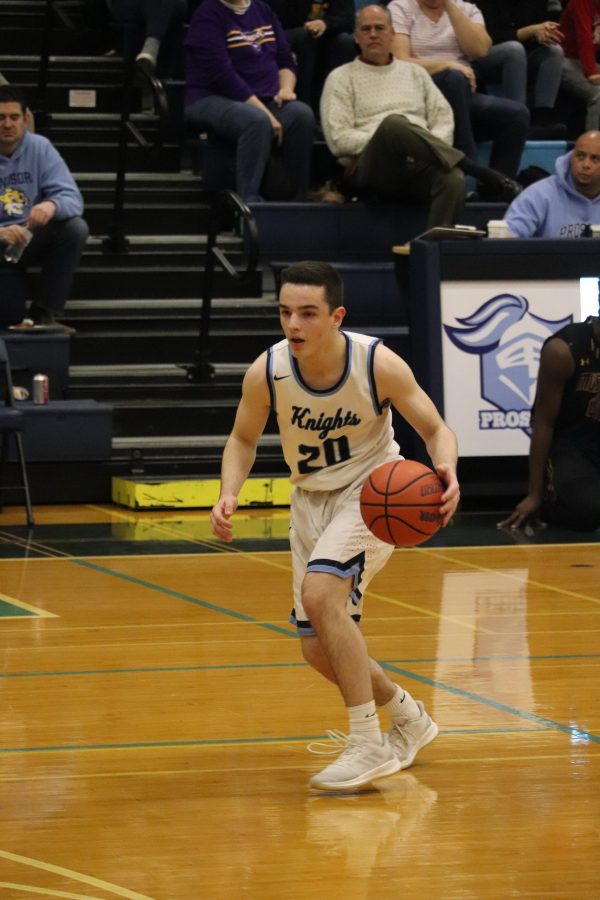 Marco Shaw is pictured in a Dec. 20 game at Prospect High School.

Marco Shaw was simply too much for the Wheeling Wildcats to handle. The junior in only his second start of the season was 8-10 on three point field goals, making his last eight straight.

“Marco is without a doubt the story of the game,” Head Coach John Camardella said, “but I was proud overall of how our team played.”

Led by Marco’s 28 points, the team routed the Wheeling Wildcats 67-39 on Jan. 10 at Wheeling High School.

“Coming in, we knew that we couldn’t drop another [MSL East] game … so it’s key to stay focused and try to win the rest of these East games,” Shaw said. Camardella had a similar perspective, telling the team pregame that from here on out, “every game is a championship game, and that’s the level of effort we need.”

While Owen Schneider was the only other player that had double digits in the scoring category with 11 points, the rest of the team had a strong performance behind Shaw, shooting 58% from the field as a team. The team also had a season-high 16 assists, lead by Brian Dini and Matt Woloch who each had four.

After a brutally slow first quarter that saw a combined 11 points between the teams, Prospect’s offense exploded in the second quarter and opened a lead they would hold on to the rest of the game. After a series of layups from Shaw and Gary Moeller, followed by back-to-back blocks by the Knight’s Chase Larsen and Dini, Prospect was able to open up a 21-10 lead.

Two more threes from Shaw followed by a three-point shot by Steve Mack gave Prospect a 30-16 lead at halftime. Prospect, who has grown accustomed to digging out of a hole at halftime the last few games, found themselves in a much more comfortable position at half.

Prospect kept their foot on the gas throughout the third quarter. The quarter featured a battle between Shaw and the Wildcats for the most points. Shaw individually was able to take a 19-17 lead over Wheeling, then lost it, but reclaimed the lead at 22-21 before being subbed out.

Prospect went into the fourth quarter with a solid 46-27 lead, allowing for everyone dressed to play on the Prospect bench to enter the game.

In a season where it has felt like Prospect hasn’t been able to catch a break (five of the team’s eight losses have come by five points or less), everything seemed to click Friday night at Wheeling.

“We’ve lost a lot of tough games this year and I was proud of how we came out focused and played with energy,” Camardella said.