Reading the Rainbow, Counting the Colors, Tasting the Tales 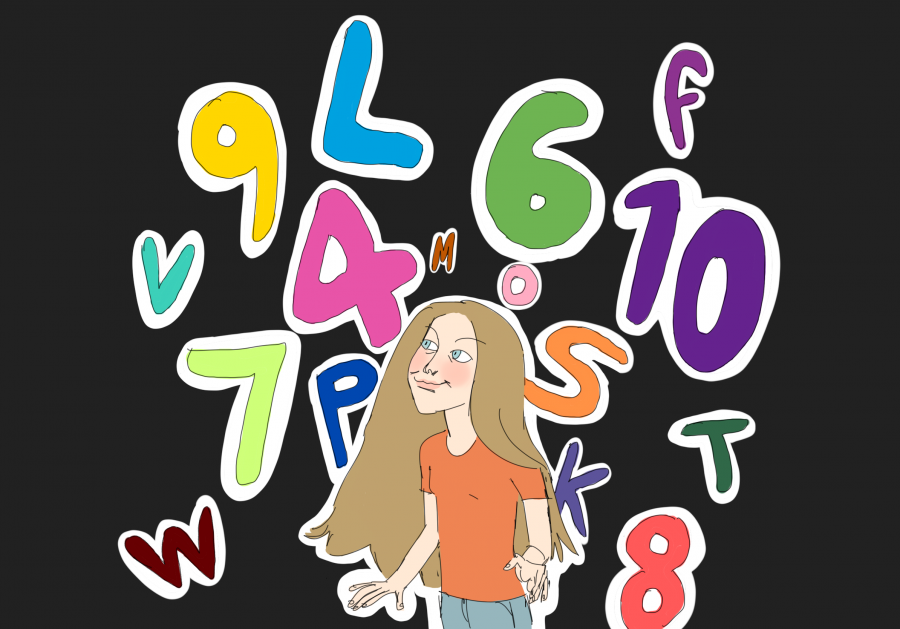 One day I was frantically raiding my sister’s closet searching for something to wear. I told her that I wanted to wear her purple sweater because it was the third day of the month, and three is purple. It can’t be any other color.

What even? That’s so wrong. Also, her dark green sweater just didn’t match the third at all.

My sister and I have been having these arguments for years. It all started when I told her that I could see colors for letters, numbers and words, and found out that she could too. Soon after that, I found out that it was caused by synesthesia. We’ve been debating which color is best to wear on certain dates and days of the week ever since.

I found out I had synesthesia in fifth grade when I read “Out of My Mind” by Sharon M. Draper. In the book, the main plot entails the main character, Melody Brooks’, struggle with cerebral palsy. However, it briefly mentions synesthesia when Brooks talks about how she could see colors as her parents played music for her.

When I read this, I was thinking, “Oh my gosh, she can see colors with sounds? I can see colors with letters and numbers!” So I did a quick Google search. Shortly after typing synesthesia and hitting enter, with all the bursts of pink (from the letter ‘A’) and yellow (from the S’s) my mind, I found out that I have grapheme-color synesthesia, and according to Psychology Today, it is the most common type.

I am part of the estimated one out of every 2,000 people who have synesthesia. According to the American Psychological Association, synesthesia is a Greek term that means “to perceive together.” Additionally, Healthline states that this condition can be genetically inherited; I’ve found this to be true since both my mom and sister have it as well.

Synesthetes typically experience associations between one or two senses. For example, a person may be able to associate a color with a sound or an object (word, letter, number), taste shapes, taste words or smell colors.

Notice that I called it a condition — it’s not a disease. In fact, I really enjoy having it because the unique associations I get from it makes tasks like reading and memorizing a little more interesting. For instance, I can study vocabulary words quickly and learn people’s names fast.

“It’s an example of how the brain sometimes wires and fires incorrectly,” psychology teacher Daria Schaffeld said. “I would say it’s not tragic, but it’s fascinating nonetheless.”

Yet, this doesn’t mean that it’s not worth studying. Since so little is known about synesthesia, it should be researched further because it could provide us with new information about the brain and help us understand more serious conditions.

Because we don’t know much about synesthesia, there is no official method for diagnosing it, and one doesn’t have to be diagnosed by a doctor in order to find out if they have it. Most of the time, people who have synesthesia find out they have it when they learn about what the condition is. According to Schaffeld, synesthesia is similar to conditions such as color blindness in that most people just think that the way they perceive the world is normal until they discover otherwise.

Having grapheme-color synesthesia has been extremely beneficial to me. I’m never that person who wakes up and has no idea what to wear. It’s simple for me. Is it the fifth? Wear something cream or beige — something similar to yellow. Is it the eighth? Wear coral or pink or something in the warm colors to match the orange day. The 11th? Wear light blue.

Obviously, I don’t match the date all the time. Sometimes I just want to wear a different color, or the weather calls for me to wear something that I might not have in a certain color. It’s just satisfying for me to match the date; it’s a little game I like to play with myself.

Not only does synesthesia save me time in the morning, it also helps me when I study. For example, in my AP Psychology class when I was trying to remember that one of the hunger-producing chemicals, orexin, is produced by the hypothalamus, I did a little color matchy-matchy in my brain. I see orange for “O,” so the “O” in orexin and the “O” in hypothalamus helped me link those two.

Because of the memory benefits I’ve noticed, synesthesia should be researched more to focus on the benefits it has for memory; what we could find from that could help people improve their memories.

Synesthesia may have also helped me improve my memory through another sense as well: taste. I’m not quite sure, but I believe I also have a minor version of gustatory synesthesia, because I can taste some words. I don’t actually taste them, but when I read or hear the words, the memory of the taste of the food I associate with the word comes into my mind, which often causes me to crave that food.

Some taste associations I have are ticket and bread, college and avocado toast and dream and strawberry ice cream. Some of them are too embarrassing to even admit. Keep in mind, though, that these could just be learned associations and might not be a result of my synesthesia.

While synesthesia doesn’t have many downsides, it can be inconvenient because it can mislead me. For example, when I was picking my electives for junior year, I almost picked Art 1 over Journalistic Writing 1 because the word ‘art’ is in red and it looks prettier in my mind than the orange and green of the word ‘journalism’ does. Imagine if I had done that and had never joined The Prospector — my life would be so sad! This is another concept that researchers could explore: does synesthesia affect people’s attitude towards different topics?

In addition to not knowing how complex topics such as attitude relate to synesthesia, there are still some basic facts we don’t know about the condition: we don’t even know why it happens. According to the University of Washington faculty, some scientists believe synesthesia is caused by a cross-wiring of neurons and synapses between different sensory systems.

This theory is worth investigating because it could help us find out more about serious sensory disorders, such as sensory processing disorder, a condition in which stimuli such as light or sound are misinterpreted. Overall, learning more about synesthesia can help us understand the brain and psychology better.

Sometimes I get asked if I would rather not have synesthesia. Not one bit! It’s one of my favorite traits; whether I’m trying to describe a sentence better, trying to remember a name or simply trying to pick out an outfit in the morning, my synesthesia has benefited me in so many ways.

“And I think to myself, what a *colorful* world!”

How I see the alphabet:

A- red, lowercase a is pink!

How I see numbers:

For numbers above 10, combine these basic ones and those are the colors I see. The only exception is 11, which is light blue.

(Also math was a yummy subject)

Yoga- yogurt (what a shocker)