Knights bounce back with decisive win over Grenadiers 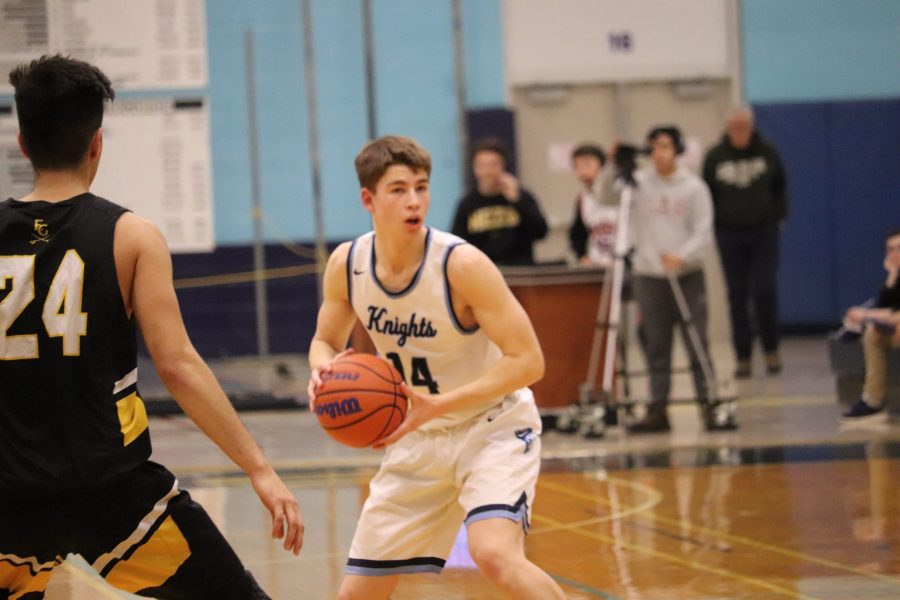 Just three minutes into the game, Elk Grove had to call a timeout in an attempt to halt Prospect’s momentum. The Knights had come out with something to prove and already had a 7-0 lead. Right out of the timeout, Prospect’s Brian Dini drained a three-pointer to make it 10-0 and Prospect was clearly in the driver’s seat.

Prospect didn’t take their foot off the gas the rest of the game in their 70-46 win over Elk Grove on Feb. 7, at Jean Walker Fieldhouse.

The Knights finished the quarter up 22-10, with 15 of their points coming off of threes.

Elk Grove was able to cut the lead to eight points, but Prospect’s Matt Woloch scored four straight to extend the lead back out. Fan favorite Adam Barich made an appearance in the second quarter and scored a layup contributing to Prospect’s 33-21 halftime lead.

As comfortable as the lead felt, Prospect had a similar lead over Rolling Meadows last week in the first half, saw that lead cut down to nine points by halftime, and then the entire lead erased in the second half.

With that game in the back of their minds, Prospect quickly extended to a 42-25 lead early in the third quarter with the run capped off by a three-pointer from Chase Larsen.

The Knights weren’t done scoring yet, finishing the game with 70 points while also stuffing any Grenadiers offense. Four Knights had double digits in the points column: Matt Woloch with 12, Colin Carroll with 11, Brian Dini with 11 and Chase Larsen with 10. Prospect finished with 12 threes from seven different players.

Head Coach John Camardella wants to see the team still improve their shot selection but said there was an improvement in the second half that came with more ball movement.

“Second half was better with the ball not ‘sticking’. It’s just those little things that come with more reps,” Camardella said.

Elsewhere in the MSL East, Rolling Meadows beat Buffalo Grove in a double overtime thriller, 93-83. Mustang junior Max Christie had 42 points, topped only by Bison sophomore Kam Craft who had 46 points. As mentioned earlier, Prospect actually had a 16-point lead on Rolling Meadows last week, and also lost by just four points and two points in matchups against Rolling Meadows and Buffalo Grove earlier in the season.

Prospect is now 5-3 in the conference, putting them in third place behind Buffalo Grove and Rolling Meadows.

Prospect travels to Buffalo Grove next Friday, Feb. 14, as they look to continue battling in the conference, and the game is part of a three-game stretch on the road.