BOYS BASKETBALL RUN COMES TO AN END AGAINST MUNDELEIN 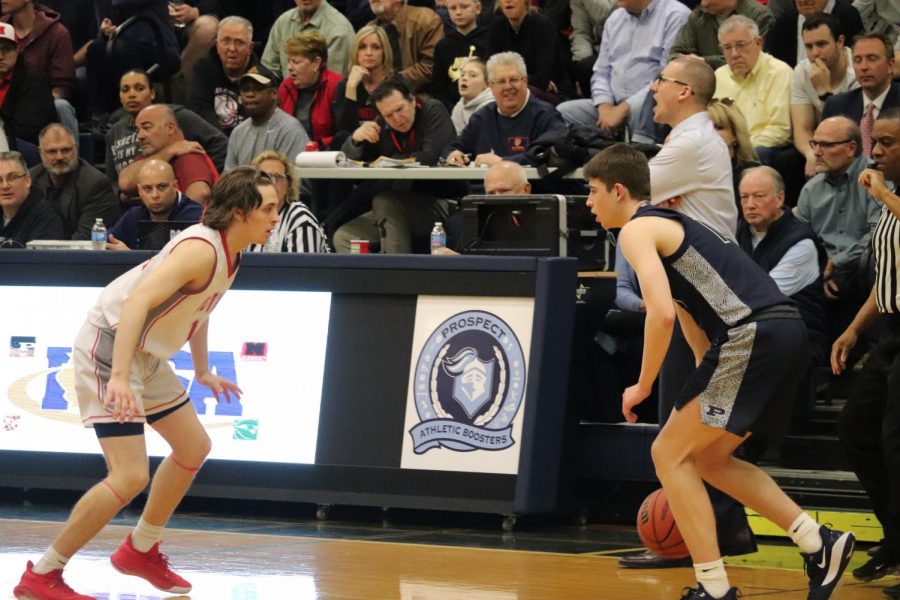 Any Prospect fans arriving 45 minutes prior to tip-off of the sectional semi-final would have found a line to get into the game already extending outdoors and wrapping around the side of the fieldhouse. The anticipation was building for the biggest postseason game in over ten years for the boys basketball program. Adding to the hype, the game was to be played at Prospect’s own Jean Walker Fieldhouse, as Prospect was the host of the sectional.

The Cinderella run for the Boys Basketball team came to an end, barely, on March 10 at Prospect High School in the sectional semi-final. The Knights lost 46-42 to Mundelein High School, the second-seeded team in the sectional and one of the top teams in the state.

Prospect led 18-17 to begin the second half, but Mundelein came out hot to begin the third quarter. A layup inside from Mundelein’s Scottie Ebube followed by four quick points from Syam Atade gave the Mustangs a 23-19 lead.

After a score from Prospect gave the Knights 21 points, Chase Larsen had a shot attempt to tie the game blocked by Ebube, but he responded with a three-point shot off the inbound to take the lead 24-23. A three from Brian Dini extended Prospect’s lead to 27-23.

Mundelein then, once again, swung the momentum back in their favor and closed the quarter on a 13-2 run, with multiple three-point shots from both Trey Baker and Conor Enright. Mundelein seemed ready to blow the game open.

Larsen didn’t seem ready for Mundelein to run away with it, banging a three on the first possession of the fourth quarter and cutting the Mundelein lead to just four at 36-32. Prospect continued to battle throughout the fourth quarter, bringing it to a one-possession game multiple times, but could never tie or take the lead. The closest Prospect got was 42-41 with just over a minute to play after a mid-range jumper from Dini, but Mundelein was able to hit their free throws down the stretch and close out the game.

“They made their free throws, we missed some free throws. I felt like that’s where it turned a little bit … we had multiple empty possessions in a row there, and that’s going to happen when you play a team that good,”  Head Coach John Camardella said. “The effort was there, and that’s all I’m focused on right now.”

Larsen was the story of the first half for Prospect, scoring 13 of the team’s 18 first-half points, and nine of the 10 first-quarter points. He finished the night with 19 points and was three of four on three-point attempts.

The first half was a back and forth affair, with an Enright three closing out the half and cutting Prospect’s lead to one.

A wide range of players contributed to the win for Mundelein. Enright had 13 points, Baker had 10 points and Ebube had nine points. For Prospect, the biggest contributors after Larsen were Dini with 11 points and Matt Woloch with seven.

This loss came after Prospect’s first regional championship since 2009, the year that current sophomore basketball coach Bob Reibel was the point guard on the team. This Prospect team, despite falling short of their conference expectations, was able to have postseason success that hadn’t been seen in over ten years.

“I’ll remember this team, that’s one heck of a run,” Camardella said. “They did what a [Prospect Boys Basketball] team hasn’t been able to do in about a decade, so it’s a really big deal for our crew.”

Note: The IHSA has canceled the remainder of the state tournament, so there will be no sectional championship at Prospect Friday night (March 13).