Year on Zoom Left Profound Challenges as a New Student 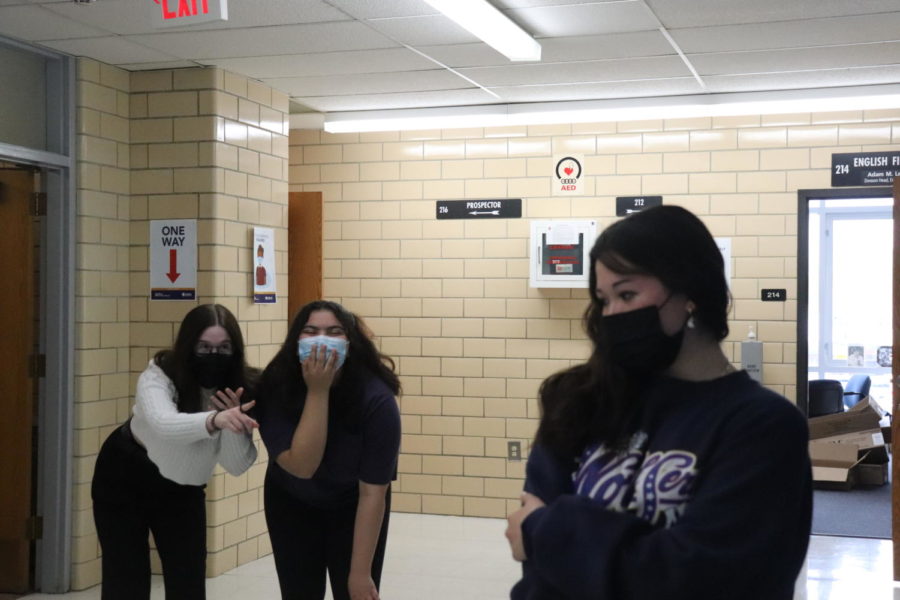 I am no stranger to being the new kid at school. I have moved a total of five times between second grade and now, my junior year of high school. Before I moved to Arlington Heights in October of this year, I had lived in the small town, Morris, Ill. with a population of just over 14,000 people,

At the beginning of my sophomore year at Morris Community High School, I noticed that Ava, a girl I knew but wasn’t close friends with, and I would always go the same route to our Spanish class. At first, we smiled at each other and only spoke when there was free time in our class.

I considered Ava one of my “school friends,”  someone I considered a friend but didn’t actively make plans with or talk to outside of school, so I had no problem walking to Spanish with her.

While she started merely as a walking buddy, Ava eventually ended up becoming my best friend. Although it may not seem like much, the five-minute passing periods over half a school year allowed me to create a friendship that I still cherish today.

When I found out I was permanently moving to Arlington Heights from my previous hometown, I was crushed. This ended up being my fifth move (which if you were wondering, makes it a little hard to maintain friendships), and I was devastated.

I was so opposed to moving because I had lived in my previous town for five years at that point, which was enough time for me to put down some roots.

It was a typical small town, so I was familiar with half of the kids who went to my high school of just over 800 kids; everyone knew each other, and we hung out constantly. What I had in my friends, I severely lacked in family. Because of an unstable home environment, I knew I had to move.

Even though it broke my heart, I packed my bags for myself and my sister, and my uncle came to our rescue. Between the months of August and September, we completely moved into our aunt and uncle’s home in Arlington Heights.

Even though it may not seem like a lot, I moved an hour and a half away from every single one of my friends and it can become tedious to travel back and forth every time I want to see my friends.

This year has been the hardest year to meet people and make connections out of any previous time I have moved. Since everyone was required to be on Zoom for the first half of the school year, everyone was just a different colored letter on a screen; I was just an addition to the alphabet. To be completely fair, I wouldn’t notice another little box on my screen either.

I did get introduced in my English and gym classes, which did prompt a few people to add me on Snapchat. However, connecting over Zoom is a joke. When separated into breakout rooms, not many people took the initiative to start the conversations, which at that point, were not even of enough substance to be considered discussions.

This school year, I’ve only had one personal conversation over Zoom, prompted by my physics teacher, who encouraged us to get to know each other. The conversation was going well until our conversation got cut short by our teacher closing the breakout rooms.

Constantly being put into awkwardly silent situations caused me to start most of the conversations in my breakout rooms, which I am partially used to. Being the new student frequently caused me to learn the art of conversation starters.

If I didn’t, I could have waited a long time for someone to say something to me. I wouldn’t consider myself shy at all. I am an extrovert; I’m never afraid to ask questions in class or smile at anyone that makes eye contact with me, but that doesn’t mean I enjoyed this all the time. Moving any time can be rough, but it has gotten harder the older I’ve gotten.

Many kids I go to school with have grown up around the same people for their whole lives, allowing them to be familiar with one another and establish connections.

Like many others, I get anxious entering into unfamiliar places: my palms get sweaty, my stomach hurts and I feel self-conscious. But I wanted to make friends more than I wanted to hide.

When I went in-person to my previous schools, I wanted people to like me, so I smiled a lot, I laughed a lot, I nodded my head in agreement and I made sure I always looked nice. Like anyone else, I just wanted to be liked and make some friends.

With Zoom, it took away any need for me to look nice for school. Cameras being turned off allowed me to stay on my side of the screen and everyone else on theirs.

The downside of this? I didn’t get the opportunity to awkwardly smile and wave and to slowly develop friendships throughout this year, which has been anything but normal.

I never got the opportunity to make introductions to my classmates or establish connections with anyone but my teachers. This year, my teachers have been especially kind, and dare I say it, eager to get back to a normal school year as quickly as possible.

Even though it was Zoom school, I remember being excited to go to my first day and I even had the first-day jitters.

My anxiety went unfounded as I realized that the virtual environment made it the least stressful and anxiety-inducing first day of school I’ve ever had (and I’ve had a lot).

The only downside to my day was that, after school had ended, I felt kind of lonely. It didn’t go anything like a first day as a new kid in person, and I had partially expected it to.

At the risk of sounding egotistical, I like attention, and usually, on my first day starting after I transfer schools, that is exactly what I get.

In my experience, I have found that my classmates are eager to be inclusive when they are aware I am a new student.

Based on the two times I’ve moved during the school year, I can confidently say that both times have been a much easier, happier and quicker transition to normalcy by making me feel like I was a part of my community.

Between either curiosity or kindness, kids went out of their way to introduce themselves to me and asked me a little bit about myself. It started a chain reaction of introductions and friends being made.

I felt hesitant to move during the middle of the school year. I was worried that academically, I would be behind and that I would struggle immensely to catch up. My fears were soon put to rest. Although there was a slight difference in curriculum, my teachers were very lenient in what work I had to accomplish to catch up.

Although it did require some work, everyone knows how it is at the beginning of the school year; everyone is filled with determination to stay on track and keep their grades up.

This was a time in my life when I needed all of the help adjusting I could get, even if I didn’t want to admit it myself.

My aunt and uncle told me that they had talked to a few staff members at Prospect about a group that was offered for transfer students. At first I didn’t even want to go, but I figured it would help me meet people.

The first meeting was supposed to be held on Oct. 9, but it was unfortunately canceled due to COVID-19 and the changing guidelines for schools put in place by the CDC. After the cancellation, the transfer student support groups were planning on meeting in-person when students returned to school in three groups. I never ended up going.

Between me being absent-minded, but also increasingly busier as the school year progressed, I forgot about the group and became disinterested.

As soon as I was able to return to in-person learning, I did. It proved to be nothing like previous years. Social distancing guidelines restricted teachers from being able to assign in-class partner work. I used to really enjoy moving around the classroom to work with the people I was familiar with, but that opportunity was never presented to me this year.

Like every single one before it, moves are hard. The best experience I ever had when I moved was the way that I was introduced to my middle school in Morris. On my first day of school, I went into the office to sign in and I remember feeling so anxious I thought I was going to throw up. I remember everyone greeting me by my name and welcoming me.

The middle school added a program where members who chose to join the student council had the opportunity to be able to escort and be a tour guide of sorts for any transfer student. A kind girl named Allison was my tour guide, and if it wasn’t for her I wouldn’t have known anyone that first day.

Because I was introduced to her at the beginning of the day, we spent some time getting to know each other and, a year later, had developed a deep friendship. Because of her on that first day, my anxiety walking into the lunchroom was eased because I knew I had at least one familiar face that would be smiling at me.

This year, I spent every lunch period alone as opposed to the past several years when I was surrounded by friends. Between Zoom and the abnormal school year, I can’t help but wonder what my next few years of education will look like, and whether I’ll be able to adapt.