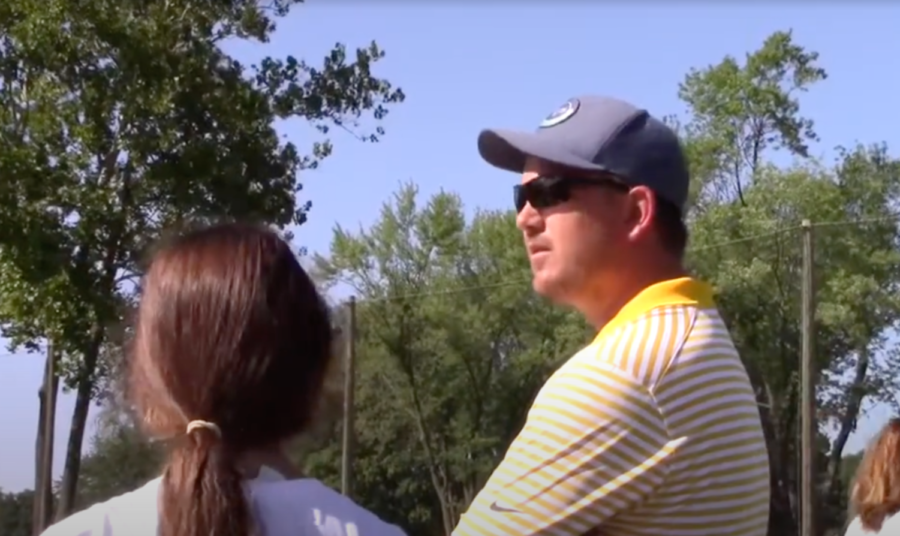 In a 2019 regional boys’ basketball matchup between the Prospect Knights and the Buffalo Grove Bison, the main question on the Prospect coaching staff’s mind is “How can you stop 6’6 shooting guard Kam Craft?”

As of late, Craft has been getting a lot of interest as a three-star recruit with 11 college offers. Craft and company went into the game heavily favored yet with a well thought out game plan, but Prospect was able to shock the thousands of people in the stands and hold the team to a mere 26 points.

Everyone watching that game saw the product of a season of hard work and preparation by both the players and the coaching staff. On that coaching staff was then-assistant coach Brad Rathe, who has just become the varsity boys’ basketball head coach.

The new position requires much more commitment from a coach as you not only focus on the team you coach but also oversee the whole program. This entails watching not only varsity games but going to watch the JV and sometimes freshman games as well. As the head coach watching film, scouting opponents and game planning falls on you as you prepare your team for upcoming games. The question of time comes into play due to the varsity season being a longer one with more regular season games, tournaments and playoff games all being played at a higher level.

Rathe’s coaching career technically began with children’s basketball summer camps. Rathe’s first real team was a feeder boys’ basketball team in Highland Park that he coached while in college. After realizing he enjoyed coaching, he decided to keep doing it once he chose to become a teacher. Over the course of 14 years, Rathe’s coaching career has evolved from a summer job while in college to a major commitment as the head of three high school sport programs. Trying to balance his family, his workload as an AP U.S History teacher and being the coach of three varsity sports has become Rathe’s life. However, coaching little kids is much different from coaching a high school basketball player.

As a student teacher, Rathe was able to coach sophomore girls’ basketball at Richmond Burton high school, and this was the beginning of Rathe’s high school coaching career. His career continued at Prospect with him coaching both boys’ and girls’ tennis before switching to girls’ golf and boys’ tennis and then taking on the additional role of assistant coach for boys’ basketball.

Now, Rathe can proudly say that he is the varsity coach of girls’ golf, boys’ tennis and boys’ basketball. And as time went on, Rathe was able to work closely with boys’ basketball head coach John Camardella and gain experience from him. From all of this coaching experience combined, he learned what it takes to become an effective high school coach.

“I played basketball in college. I played my whole life. I’ve seen countless games and have a lot of excitement there,” Rathe said. “But I’ve learned a ton coaching golf these past few years, learning how to approach the game.”

It’s obvious that being a sophomore girls’ coach or working basketball camps is a far smaller undertaking than becoming a varsity basketball coach; however, Rathe wasn’t thrown into the deep end. While he had a tenure as the assistant boys’ basketball coach, Rathe was very involved in the decision-making of the team, making it easier to transition to head coach. When he went for the head coach position he had a lot to think about as taking the job would mean a far larger workload.

“The basketball season is like five months and [my teaching] job is ten months and I have little kids at home,” Rathe said. “Would it be possible to dedicate myself to this while also being a good husband and father?”

Dedication is the key to both sports and family. Rathe’s dedication to the school and the sports he coaches means that not only do players rely on him to guide them and help develop them as athletes, but the programs also rely on his dedication as he is the head coach.

Balance was the main worry for Rathe in making this decision as he was unsure if he could dedicate himself so heavily to the school while also remaining dedicated to his family. It was the biggest thing he took into consideration, yet he has been able to balance both due to merging the two by bringing his children to games, where they enjoy watching their father work. Yet the person who would be the most affected by Mr. Rathe’s choice to coach basketball would be his wife, Kendal Rathe.

According to Kendal, life has turned into a juggling act for the Rathes as planning around a busy coaching schedule can be challenging; however Mr. Rathe’s ability to take their two sons (ages 3 and 6) to practices and games has made things easier. Kendal also gives some credit to the other coaches on the coaching staff, who are understanding if Rathe needs to leave early or have someone else do something.

“It’s a good community, there are a lot of people that the boys are familiar with,” Kendal said. “They can play with the teammates or the coaches, they’re so familiar with them being there that it’s a really comfortable place.”

Like any coach, Rathe tries to put his team in the best possible place to win even when he and his team are the underdog. Whether it’s an upcoming tennis match versus a heavily favored Hersey team or going up against a future D1 basketball player, Rathe comes into these games prepared. The weeks leading up to these games are rigorous, as it starts with personal research and finding out who the notable players on the opposing team are, and then the real work begins.

“We know all their plays and we have guys on the scout team running them. We make plays just for that specific team that we use in that specific game,” Rathe said. “We tell our guys exactly how we want them to defend certain things, we’re doing everything to get ready for the game.”

Rathe has been on the coaching staff for multiple upsets, such as the aforementioned Buffalo Grove game. He takes these challenges head- on, embracing the role of the underdog and working extra hard in preparation and game planning, doing everything in his power to win.

The time and effort that goes into an upset is much needed due to the lack of confidence everyone has in your team, according to Rathe, but these Cinderella runs like the 2007 New York Giants beating the undefeated New England Patriots are what brings a team together.

From a coaching standpoint, these are the guys you know the best because of all the time you have spent with them and the bonds you’ve formed, making upset wins that much sweeter.

From a player’s perspective, you have just prepared for weeks with the same group of guys for this moment. Big time players make big time plays when the pressure is on them.

Whether on the court or in the classroom, Rathe has the mentality of trying to form close bonds with his athletes or students with the philosophy that students or athletes will work harder for a teacher or coach that they like. This is double-sided though, as he also gets to take away strong bonds and memories once his students leave his class or his athletes leave his team.

“Teaching AP US and having to grade essays and … coaching three sports, on normal weeks I’m working 60, sometimes 70, hours a week. I’m here more than I’m at home and that’s certainly a struggle,” Rathe said. “But trying to give kids opportunities and doing my best to make this place a better place is worth it to me.”