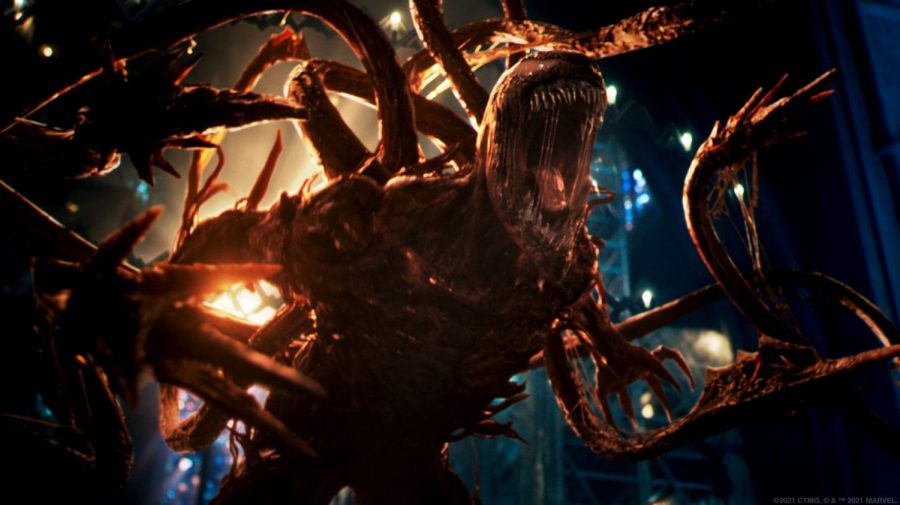 Venom: Let There Be Carnage review

Red is the new black

Now, as a (self-proclaimed) movie critic, credibility is important. I can’t go around saying every comic-book movie that comes out is a cinematic masterpiece, or else I risk looking like a shill with no real critical skills. Take, for instance, a movie like Venom: Let There Be Carnage.

This movie is, without a doubt, not a well-made film. The acting is subpar, the CGI is shoddy and it probably took the writers less time to think up a script than it did for me to write this review, and that’s being fairly generous. I should, by all rights, denounce the movie in a couple of paragraphs and call it a day. With that being said, should you go see Venom: Let There Be Carnage?

You should see it twice.

Venom was already a movie that I had tremendous respect for. I won’t pretend it was good, but in many ways it is the purest form of entertainment you could ask for: just a hectic, fun ride that made no sense and took pride in itself for that fact.

And when it ended by teasing a red-afro wearing Woody Harrelson as Carnage, well, you’d better believe I was left drooling for more.

If you still don’t understand how these movies can be so bad yet so good at the same time, allow me to detail what’s included in Let There Be Carnage. You get to witness a superhero, buddy-cop, rom-com, horror movie with not one, but two prison escape sequences, a serial killer villain, PG-13 versions of people’s heads getting bitten off and some of the cheesiest acting you will see in modern filmmaking. And you get a big CGI fight scene at the end. This. Is. Cinema.

Now, if you go into the movie expecting anything of substance, then you’re doing it wrong. This movie is fun for fun’s sake, nothing less, nothing more. I mean, just look at the title: “Let There Be Carnage” is either purposefully goofy or unsuccessfully edgy, and it’s funny either way.

Of course, the movie is still not very good, but I seriously think it perfectly achieved everything it sets out to do. It improves on the original by not having to run through as much poorly thought out exposition, and Cletus Kasady, a.k.a. Carnage, is leaps and bounds better than the one-dimensional villain of the first film, if not for little more than the fact he isn’t the same freaking color as Venom.

The whole cast is clearly having fun, especially Harrelson, though Tom Hardy’s half-sleep-deprived, half-stoned take on Eddie Brock is always a blast as well.

Let There Be Carnage hits the perfect sweet spot of campy, while not being obnoxious; the movie feels like a pitch-perfect modern recreation of cheesy, over-the-top classics such as the Tim Burton Batman movies or the Sam Raimi Spider-Man trilogy. I recognized almost a dozen comic-book movie tropes in the last 15 minutes alone, and I loved every second of it.

The movie’s biggest asset, however, is its runtime. As a Marvel elitist, I usually balk at movies under two hours, but a brisk hour-and-a-half is all Let There Be Carnage needs to deliver a satisfying, cohesive story that doesn’t overstay its welcome in the slightest. The snappy pace also means that you really don’t have time to absorb just how ridiculous the movie truly is, and it gets to the point without feeling like it didn’t fully develop any of its ideas (the fact that those ideas are countable on one hand doesn’t hurt either).

The digital effects, while, as previously mentioned, are admittedly lacking, they’re still incredibly creative and have enough wow factor to excuse their cheapness. I especially appreciated that the movie gives us plenty of time to bask in its phenomenal design for Carnage instead of hiding him in shadows for the majority of the runtime; it truly feels like the filmmakers understood exactly what we wanted to see, and just … gave it to us.

I can’t stress enough what a perfect little movie Let There Be Carnage really is. It’s been so long since a movie has fulfilled all of my expectations in such a complete and satisfying manner, and watching a movie that gave me nothing except a huge grin from start to finish was practically cathartic.

If this movie doesn’t sound like your cup of tea, then it’s probably not. But if you can watch it expecting to be entertained and laugh at things that aren’t even supposed to be funny, then you’re in for one hell of a ride (even in spite of the fact that they ditched the afro; that really stung).