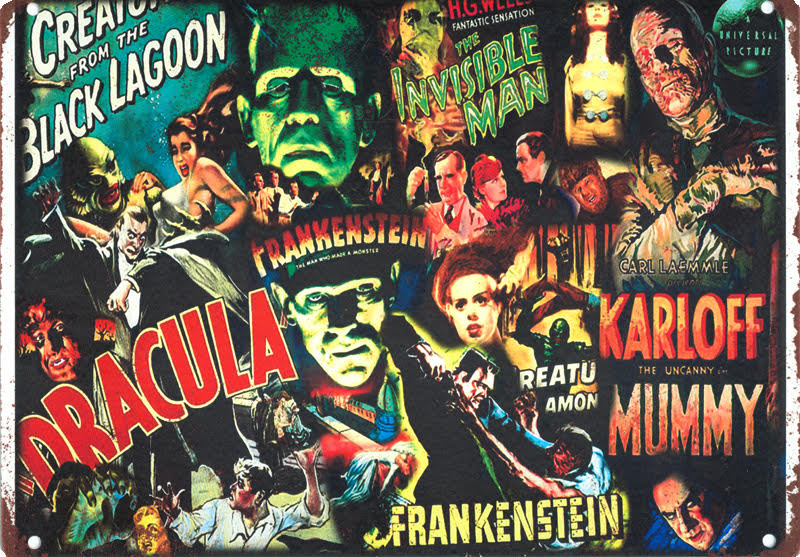 Picking a Halloween costume is a nightmarish task, and not because the costumes on display are particularly frightening.

Choosing one’s Halloween costume requires a perfect balance of picking something original but not obscure: funny but not impractical. Now, if there’s one thing that no self-respecting child would dress up as for Halloween, it’s a “Halloween character.”

You know the type. Frankenstein, Dracula, witches, warlocks and more appear on cereal boxes and decorations galore for all of spooky season, then hightail it out of there come Nov. 1. But with Halloween on the horizon, where did such popular icons originate from? Well, after watching roughly 8 hours of classic monster movies, I would say I have a pretty good idea.

The movies that pushed characters like Frankenstein, the Invisible Man and more into popular icons have been around for nearly as long as movies themselves have. They were released in a time where it was commonly acceptable to wear a suit to a movie theater, a far cry from the atmosphere of today, where you’re half guaranteed to find some disinterested millennial sitting in front of you checking their Instagram feed for the 75% of the runtime.

And while it’s never polite to discuss someone’s age, there are obviously some major differences between these movies and the multi-million dollar productions of today. Sure, the special effects from 90 years ago may be shoddy, but they’re charming in their own way.

I’m always the first to complain about unfinished-looking CGI or green screen work in modern blockbusters, but when I see a bat in “Dracula” that is quite clearly dangling from a wire or a rubber monster suit that doesn’t quite allow for full head movement, I can’t help but smile.

While some of the effects are truly horrendous by today’s standards, none of them pulled me out of the movie very much or ruined the experience. Likewise, the rest of the “outdated” elements of the movies, such as the unnecessarily over-the-top acting or black-and-white color schemes did little to ruin my experience watching; if you think every movie today feels too samey, then these will most definitely not disappoint.

The quality of these movies, regrettably, is not samey either. If you’re looking for a more in-depth look at the themes and atmosphere created inside of these movies, check out the next issue of the Prospector; in the meantime, here’s a quick rundown, from best to worst, of which movies are worth your time if you’re looking for some (incredibly cheap) scares this Halloween. All of them (except for “Dracula” bizarrely) are available for free with ads on Peacock, so you can have access to the majority of them for the low, low price of navigating Peacock’s menu interface.

If you go into these movies expecting them to be bad, then this is exactly what you have been picturing. While it might sound novel to witness the beginning of one of the very first “cinematic universes” as the two monsters meet for the first time, this novelty is precisely what makes it so terrible. As the story goes, this movie was made because its writer, Curt Sidiomak, wanted to buy a new car, according to Den of Geek, so he came up with the lucrative idea of cashing in on the two characters’ popularity at once.

Besides completely butchering the character of the Monster (who has already begun being incorrectly referred to as Frankenstein at this point) and offering a shallow and uncharismatic Wolf Man, this film features a haphazard story that desperately tries to follow the beats of more successful monster movies without any of the originals’ charm or follow-through.

Its terribleness isn’t even enough to make it “so bad it’s good,” and, while it’s actually just over an hour long, it is a complete slog to wolf down in one sitting.

When thinking up a mummy, what visuals come to one’s mind? A cloth-wrapped zombie walking around slowly with its arms outstretched is the obvious, Scooby-Doo-ified answer. But a crusty old man who stands around staring at people intensely and lusting after a woman who died centuries ago? Well, if that sounds appealing to you, then by all means, enjoy.

The movie is, in most senses, just a worse version of “Dracula,” which, as you’ll soon see, is no masterpiece in the first place. While the plotline is certainly original, it can’t help but feel disjointed and boring all the way through, with nothing truly cementing this as a “Mummy” movie besides the barely-referenced Egyptian setting. It ends up feeling like a collection of all the boring and uninteresting elements that are sprinkled throughout all of these movies, just wrapped up in an (un)tidy little package.

Given the sheer recognizability of the venomous vampire, one might assume the quality of “Dracula” to be a sure thing; however, the actual product, while not horrendous, is far from entertaining. The movie’s greatest flaw lies in its muddled and uncertain plot, as the “rules” for vampires are barely explained, confusing me to the point where I focused more on figuring out what was going on than I did on the actual, boring plot.

The movie starts off strong with an introduction in the eerie painted backdrops of Transylvania, but once Dracula moves to London to start pulling a “human mosquito” on the damsels of the city, it devolves into a repetitive, predictable slog with some of the most flat and unlikeable characters yet.

It’s certainly not as bad as the two previous movies, but when competing against the other, more competent movies on this list, it’s an absolute bloodbath.

This no-frills, all-gills romp is remarkably inoffensive: it’s a fairly standard, run-of-the-mill monster movie without any weird problems to make it boring or dislikeable. It feels mostly like a basic template for the rest of the movies on this list, with a formulaic (though not particularly boring) plot and characters. It does however, boast cool though admittedly overused underwater camera technology, which while even more impressive at the time, still holds up remarkably soundly.

Released in 1954, “The Creature From the Black Lagoon” is a definite example of how much filmmakers learned in the 20 plus years since “Dracula” in 1931; it features the most fully-fleshed out and relatable characters out of all six movies, and has a much more competent story structure to boot. While it’s certainly nothing all too special, it makes it this high on the list because it lacks any major issues that might drown out its potential.

While the rest of the movies I’ve described haven’t necessarily been awful, this is the point on the list where I can actually tell why these movies are called classics. “The Invisible Man” features by far the most convincing special effects yet, with a (nearly) seamless “invisibility” effect that it employs to great effect. This, along with the phenomenal acting, created the scariest movie of the bunch. While those standards might not be high, the fact that the titular villain could be hiding anywhere on screen at any time actually invested me in the story in a way none of the other movies were able to.

While it may take itself a little too seriously at times and lacks many true character moments in its plot, “The Invisible Man” is incredibly enjoyable and does an admirable job in delivering on the ideas it sets up. Its premise could seem corny at first, but I really can’t see why anyone wouldn’t like this movie.

While it may seem like the lazy sequel to end all lazy sequels, “Bride of Frankenstein” is a robust, competent movie that feels both like a classic of the genre and a clever self-parody. It contains more emotion and genuine humor than all of the others combined, with Boris Karloff’s classic performance as the monster being the glue that binds all of its various elements together.

It presents several clear and distinct themes that persist throughout the movie, while never losing its over-the-top and cartoonish feel; more so than all the others, characters in this movie talk like Shakesperean actors mixed with Bond villains. It’s the quintessential monster movie, and while it’s difficult to describe, the pairing of its inherent silliness with its well-developed drama is a match made in heaven.