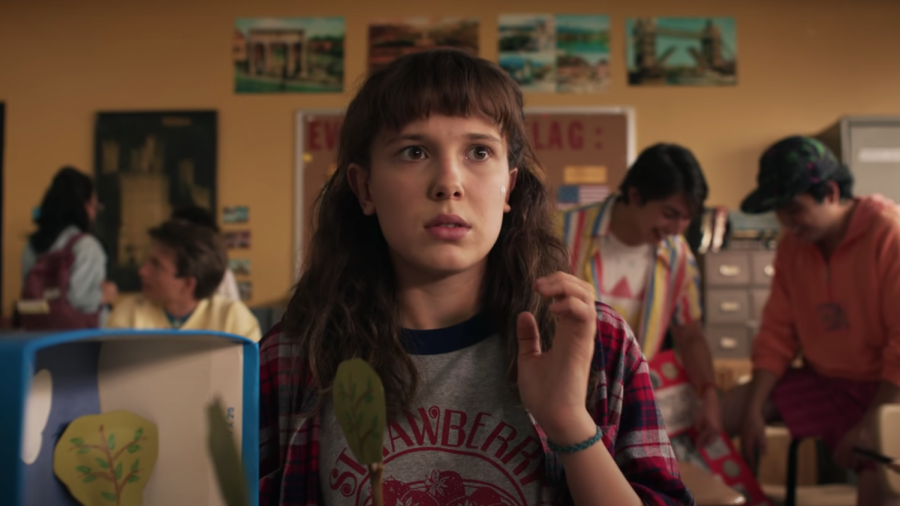 “Stranger Things” Season Four Plans to Bounce Back Next Summer

As the gates to the upside down are closed with big explosions presumably killing the mind flayer, season three of “Stranger Things” finishes off with a sad but sweet ending that definitely jerked a couple tears for me. Billy and Hopper seemingly sacrifice themselves to save the others from the monster.

In three months the rest of the characters move on and Joyce takes Eleven and the rest of the Byers family to start a new life outside of Hawkins, the town everyone has been accustomed to seeing the characters having their journeys at. The gang has their last scene together as Joyce, Eleven and the Byers move to start a new life.

The season doesn’t end there as the next scene brings us to some sort of underground Russian facility with many prison cells full of people. At this Russian facility, an officer drags a prisoner out of his cell and into a different cage, where he’s attacked (and presumably killed) by a demogorgon. But before the doomed man is taken from his cell, the Russian officer pauses in front of a different cell door. “No,” a second officer tells him. “Not the American.”

The season finale finally ends here with the viewers at a cliffhanger not knowing who the American could be, ringing speculations on whether Hopper is possibly still alive and not actually dead.

Having been put on a cliffhanger before the next season my sadness quickly turned into excitement and shock as the thought of Hopper being alive gave me the confidence that this would not be the last hoorah for the characters.

Now two years after this cliffhanger the newest trailer for season four is released. The season is shown to have new characters, an entirely new setting and a new unknown evil that our favorite characters will have to face in this newest installment. And with the second trailer we see that Hopper is in fact Alive and working in a Russian Gulag presumably trapped in Russia as he closed the portal.

The newest season 4 trailer was released on Nov. 6 as fans got a response to the long wait COVID-19 had created for the production of the fourth season. With a release date planned somewhere around this upcoming summer fans are gonna be eager to see if season 4 can build off season 3 and if it will be bigger than season three.

As I watched season three I enjoyed the new change in the setting as we saw the cast spend most of their time in season three at the Starcourt mall. I personally loved seeing them in this setting as the 80’s were known for malls being social destinations, and the production really made the mall have a realistic and nice nostalgic atmosphere — something that the series prides itself on.

I got to see some new characters introduced, but the one that stuck out primarily was Maya Hawke’s character Robin. She and Steve form a relationship while working at the Starcourt Mall at an ice cream shop. They grow in their relationship and it was an interesting and entertaining subplot to see.

The main plot of the story was really where I think it made season 3 stick out from the others. It was representative of blockbuster action movies back then as the season’s action became bigger and more crazy with the addition of the big bad Soviets taking over the starcourt mall.

I loved how this season referenced many of classic 80’s flicks. Such as “R80’ ed Dawn,” “VideoDrome,” “The Fly” and “Day of the Dead.” Adding to it feeling like a time capsule back to that time. And the addition of the theme park really added to the nostalgia of summer for me at least, even if the setting was in a different decade.

The final was one of the most action packed and entertaining finalies I’ve seen in the series. The gang fighting Soviets and Giants aliens such as the mind flyer wasn’t too over the top for me as it added more foes for the characters to face.

Now with the news of the fourth season being scheduled for this summer has got me wondering with the new setting and characters how will season four build off season three’s crazy finale.

With what I’ve seen from the Duffer Brothers, I am confident that they will bring a thrilling and interesting fourth season to the series. They have always built upon prior seasons and constantly outdo themselves. With new characters, plot and settings I can’t wait to see what new thing they bring to the table.

For fans that worry about the series direction during the pandemic, there should be nothing to worry about as the expectations will be met and exceeded in this newest installment. Just sit back and wait till this summer as season four is for sure to be another great addition in this cult phenomenon.