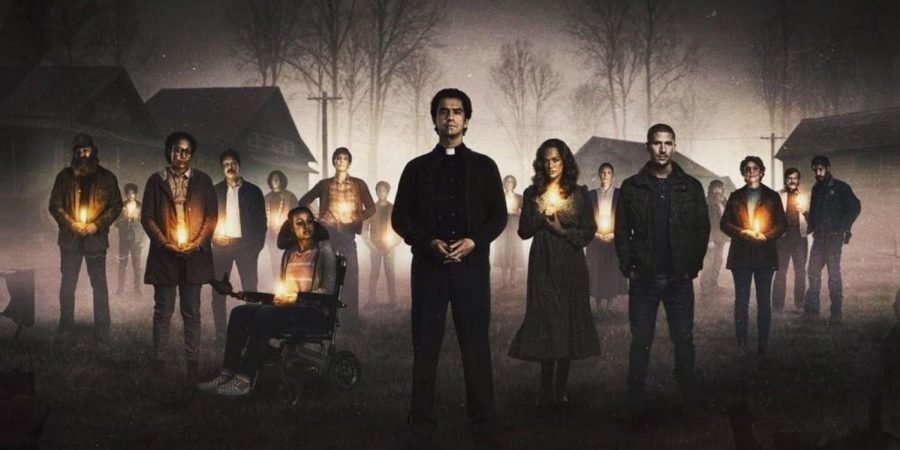 I personally hate the horror genre. I don’t like being scared, the adrenaline rush that most might get from the jump scares or gore, just isn’t for me.

This seven-episode series doesn’t stem from any single clear allegory like most horror movies or shows do. This show is about addiction, grief and coping but also it explores organized religion, spefifically Catholithism and humanity.

I took a chance by watching this horror series, and I am so glad I did. The directing, writing, cast, cinematography and the score are incredible; everything about this series is top-notch and definitely haunting.

I recommend not looking up any teasers or trailers for this series before watching it. If you go in completely obvious to any major detail, your watching experience will ultimately be better. I dove into this series only knowing the show’s description and that made every twist, turn and surprise all the more shocking. Now with that, I will do my best to tip-toe around any spoilers.

What really makes this series an amazing horror experience is Flanagan’s touch on this show. He truly understands the genre and what a show within it should have. He understands what will truly, deeply scare his viewers. Flanagan uses alcoholism as a key theme in “Midnight Mass,” the starting scene shows a young teen girl who was killed by a drunk driver. Flanagan, having struggled with alcoholism himself, wrote this scene that scares even himself, knowing it would pull at the hearts of viewers. He knows how to write a scene and then go on to instruct the actors to portray exactly what was written and go beyond that to give the audience such a quality episode.

The cast did such an amazing job transporting the audience into this small town of Crockett Island, with stars like Hamish Lunklater (Paul Hill), Kate Siegel (Erin Greene), Zach Gilford (Riley Flynn) and Rahul Kohil (Hassan), the characters come to life like never before.

This series follows these characters with the “main protagonist” being Gilfords character Riley Flynn, however he isn’t the only protagonist. With other focuses on both Linklater and Siegel’s characters, the perspective switches constantly which is something I particularly enjoy in both movies and shows. Because of this, viewers truly get a feel for the town and all the people in it, becoming another member of the “Crock Pot” as the locals call it.

It’s truly impressive how you can feel a part of a fictional community by the end of this series. You feel like you could walk around the town; like you’ve lived there your entire life.

Though there is not one main protagonist, there is a main antagonist and this woman is truly evil. Beverly “Bev” Keane, portrayed by Samantha Sloyan, is an avid member of the local church, St. Patricks. Throughout the series, Keane bends the Catholic scripture to her will. She is manipulative and scary, and she shows her strength silently. She even goes as far as murdering an innocent dog by poisioning a hot dog.

Aside from the plotline, “Midnight Mass” has some of the best cinematography I have ever seen. The show starts out very cold, using blues and grays, but, as the show continues, the color starts to grow warmer episode by episode. An orange sunrise at the beginning of the final episode is evident of that switch. This sunset completely contrasts with the constant overcast weather of Crockett Island.

The use of the camera and its angles is quite impressive. There are many monologs throughout the series and during these the camera stays focused on the actor for longer than most shows would stay on one actor. The view truly looks at the actor, really the character, and feels for them. The audience either cares for the character or is deeply terrified by them. Flanagan did an amazing job instilling fear in the audience through so many outlets.

The pacing of the series is very well done, though this show is categorized under horror, the show really isn’t meant to scare you with jumpscares or axe murders. The plot and the characters pull you in and make you a part of the story to only then scare you when negative experiences happen to the characters you’ve grown to care for.

In most horror stories I’ve watched, I haven’t grown to care about the characters or what happens to them. I’m usually just scared of what will happen, not particularly for any character. But with this show, I felt for the characters and their struggles.

“Midnight Mass” is an all around great show; it was surprisingly deep for a horror series, and it was also respectful of the religious commentary. With its amazing acting, directing, visuals and presentation “Midnight Mass” is truly the show you must binge.