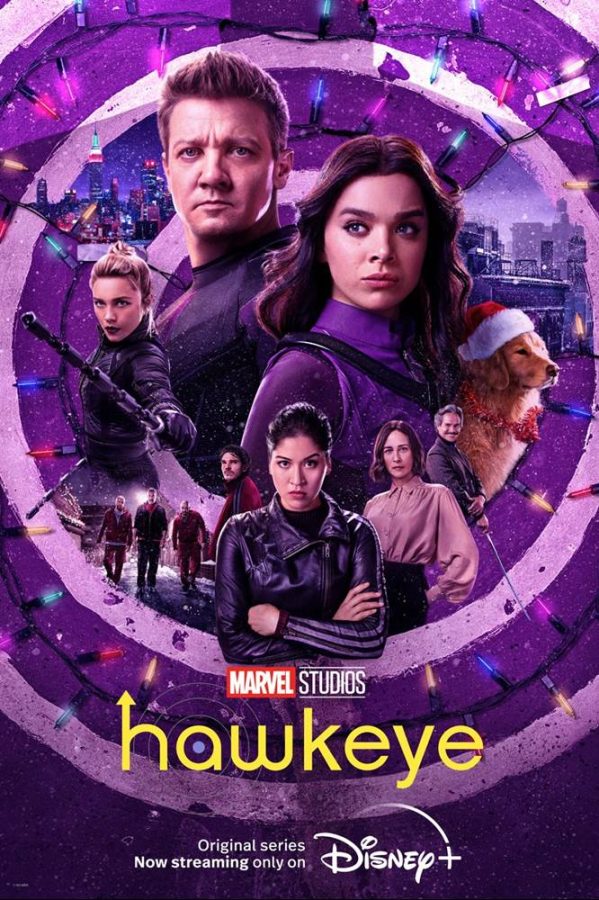 Disney+’s MCU Shows Becoming Too Formulaic With Release of “Hawkeye”

Disney+ has just released their best show yet with the release of “Hawkeye,” which first aired on the streaming service on Nov. 24, 2021 and the season finale being aired on Dec. 22, 2021. Sorry I should rephrase, Disney+’s best MCU show, the title of their best original series still belongs to the “Mandalorian” in my humble opinion. While I did thoroughly enjoy “Hawkeye,” I did have some complaints about it. If you have yet to watch it, or any of the MCU shows for that matter, then I recommend you tread lightly as there will be spoilers throughout.

“Hawkeye” was another six episode series starring Jeremy Renner as Clint Barton or Hawkeye and Hailee Steinfeld as Kate Bishop or, well, the other Hawkeye. I really enjoyed the dynamic between Renner and Steinfeld on the screen. They had really good chemistry throughout the whole show and that made the show that much better.

The show starts off with Barton and his children spending some time in New York to celebrate Christmas when things start to take a turn for the worst. Barton is watching the news when he sees his old Ronin costume being worn by someone else. Barton was known as the vigilante “Ronin,” during the time period known as “the blip.” During that time he went around murdering different criminals over the five year span, because he believed people like that, people who killed, didn’t deserve to have been part of the half that was spared. Yeah, it sounds bad I know. He had just lost his family just like millions of people around the world and he didn’t want those people taking anymore lives.

Knowing that his costume wasn’t destroyed like he had thought, Barton had to stop his family time to retrieve his costume and protect his identity. He would soon find out that none other than Bishop was dawning his outfit after she found it at an illegal black market auction. Bishop would soon team up with her childhood idol (Barton) to take down the “Tracksuit Mafia” where they would later discover Bishop’s mother was behind most of the mayhem as well.

Two more antagonists would be revealed throughout the show as Yelena Belova played by Florence Pugh is hired to kill Barton and Wilson Fisk or “Kingpin” played by Vincent D’Onofrio is the man behind it all. I loved seeing these characters back. I thought Pugh did a great job in “Black Widow” and as a fan of Netflix’s “Daredevil” I definitely freaked out a little seeing D’Onofrio reprise his role as Fisk.

My only complaint with Fisk’s character throughout the show was that it didn’t feel the same as his character throughout “Daredevil.” He just didn’t seem as menacing or as powerful as he once had. It may be because he lost power during “the blip” but it was just slightly disappointing to see. I did like that they made him seem stronger and more durable in his fight scene with Bishop. I thought that was a nice touch but it boggles my mind how she was able to even beat him in a fight. Nothing against Bishop but she shouldn’t be able to take down one of Marvel Comic’s biggest villains in one of her first ever fights.

The other thing that I wasn’t a fan of with the show was the finale. With the entrance of Belova in episode four and Fisk’s reveal in episode five I really thought they were building up to something huge and it just felt anti-climatic to me. In my opinion nothing significant really happened. They just fought at the Rockefeller Center and that was it. Bishop’s mom did get arrested in the end and Fisk got shot by his protégé, Maya Lopez played by Alaqua Cox.

That does lead me to my next point and that is I do not believe Fisk is dead. They cut away as he’s being shot and most moviegoers know, if there’s body there’s usually no death. I really do hope that is the case because I want to see D’Onofrio back in more live action projects. Especially if it is true that it is the same Fisk from the “Daredevil.” In an interview with Screen Rant D’Onofrio confirmed for fans that it was the same Fisk.

“I think from my point of view, like a lot of the ‘Avengers’ stuff, a lot of the MCU stuff, they tried to connect as many dots to the original canon as they can, and some dots are just not possible to connect,” D’Onofrio said. “And that’s what we’ve done with connecting to Daredevil and vice versa. There’s some dots [that] are connected.”

In the same interview, D’Onofrio pointed out some of the same things I had mentioned prior.

“Like in the ‘Hawkeye’ show, Fisk is obviously physically stronger and can take more physical abuse. But the key to his being an interesting character, in my mind, will always be the fact that he has this emotional life that grounds him, that makes everything work, as far as I’m concerned,” D’Onofrio said.

What D’Onofrio told Screen Rant gave me hope that Marvel won’t totally just reboot his character, and Daredevil himself after he appeared in “Spider-Man: No Way Home.” Still nothing has been confirmed by the higher ups at Marvel and Disney so don’t take everything D’Onofrio said to be 100% true.

All in all I did really enjoy “Hawkeye.” I had a great time watching it. Besides the few complaints I made there is something that still annoys me about the MCU shows. This goes for all of them, it is that they are just too formulaic.

For example, tell me if you’ve heard this one before: two protagonists who start out disliking each other are forced to team up to take down the main antagonist with a bigger antagonist being revealed in the later episodes of a six episode series. “The Falcon and the Winter Soldier,” “Loki” and “Hawkeye” all follow this same formula. There are a few differences here in there but for the most part they are similar stories in that sense.

The one outlier is “WandaVision” as it has more than six episodes and the story is very different due to its sitcom beginning. It does share some similarities with that formula after Agatha Harkness gets revealed to be the main antagonist in the final few episodes.

All I ask is that Disney+ goes away from this formula and starts changing up it’s shows. With “Moon Knight” airing on Mar. 30, I am really hoping they go away from it. Moon Knight is a complex character, one I really do like, and for a character like him the show is going to need more than six episodes to truly develop him.

I am a Marvel fan. A huge one even. I just really am looking forward to what Disney+ has in store for us and I just want their projects to keep improving so us fans get the best content possible.