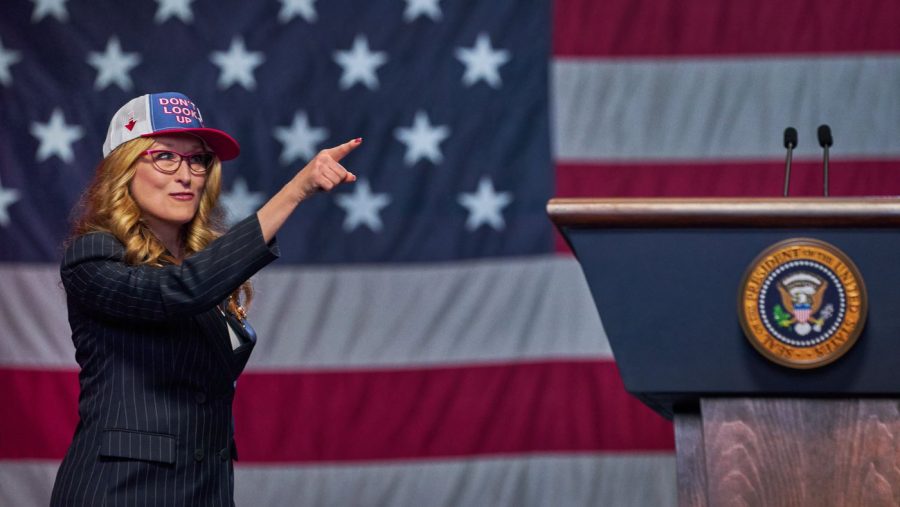 President Orlean, played by Meryl Streep, speaks to her supporters at a re-election rally while wearing a hat with the slogan: “don’t look up.” (photo courtesy of Niko Tavernise/Netflix)

I’ll be the first to say that I’m not the biggest fan of political satire. It often comes off as annoying and the writers always seem to try too hard to achieve the repetitive message of how terrible politicians are or how dire our current state of the world is

With that being said, I still watched “Don’t Look Up” for the big names (Leonardo DiCaprio, Jennifer Lawrence and Meryl Streep, just to name a few), and because my friend made me (thanks Olivia).

The conflict of the movie (spoiler alert, I guess) is that an extinction-level asteroid is hurtling towards earth — and no one is doing anything to stop it.

Two low-level astronomers, played by DiCaprio and Lawrence, task themselves with alerting the president, played by Streep, and convincing her to do something about the threat before it’s too late.

But, surprise, surprise, the president isn’t the least bit concerned as she believes that a life-ending asteroid would damage her poll numbers.

I could go on, but in order to stay away from major spoilers (and to not put you to sleep), I’ll simply say the movie is boring, unrealistic and often even painful to watch.

I get it. I get it, OK? I’m all for metaphors in film, but that doesn’t mean I want to be continuously bludgeoned over the head with them, which is exactly what “Don’t Look Up” does. Metaphors are supposed to be subtle, and I think some of the writers of the film need to be reminded of that.

So should you watch it? It depends. If you have 2 hours and 25 minutes to kill and a Netflix subscription, I’d say go for it. Like I said, the casting is impressive and it’s entertaining to see multiple big name actors interact. Heck, even Chris Evans makes a quick cameo.

Regardless, no one (myself included) seems to have a neutral view on the movie: you either love it or you hate it. For this reason, it might be interesting to find out what side you end up on. And who knows, you might even like it. After all, it does have a 78% audience score on Rotten Tomatoes.

All in all, the movie fell short of my low expectations and I can safely say that I won’t be watching another political satire film anytime soon.