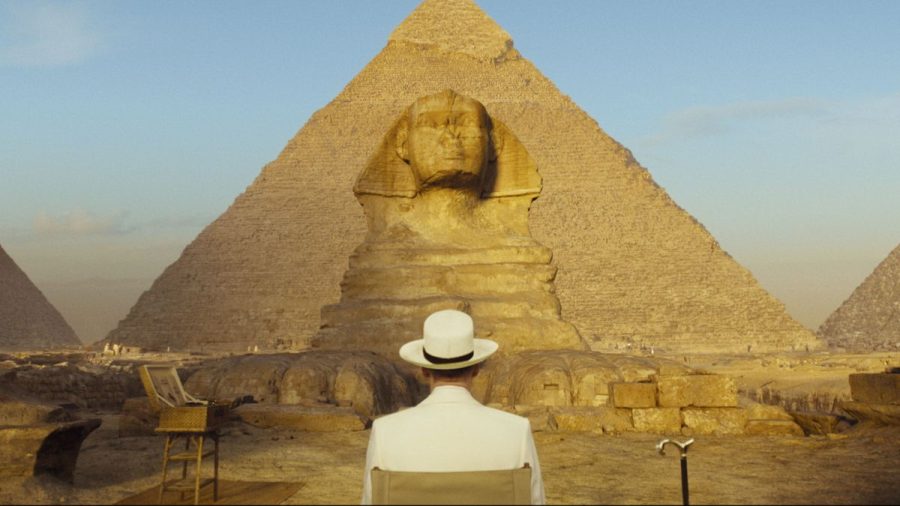 “Death on the Nile” Review – Killing in Style

A rich heiress. A complicated love triangle. A brilliant detective. A February box office with nothing to watch but “Uncharted” and reruns of “Spider-Man.”

These are the ingredients that Kenneth Branagh cooks together to deliver the latest murder-mystery thriller, “Death on the Nile.” Or rather, to microwave it hastily after attempting to deliver it multiple times since all the way back in 2019.

The movie further follows the adventures of Hercule Poirot (snobbish pronunciation required), Agathe Christie’s well-loved mustachioed detective, as he is wound into a murderous conspiracy while on a pleasure cruise for two newlyweds, played by Arnie Hammer and Gal Gadot.

As one might surmise, things devolve from there; there is indeed death on this Nile. The plot doesn’t venture too far from what one might expect for a fairly standard murder-mystery, though the high production value and elegant scale gives the whole affair a sense of grandeur and scope that I’ve missed in many blockbusters as of late.

The lighting and cinematography, while nothing all too special, does impart the intended effect of filling the experience with all that sparkly film magic that I am an absolute sucker for. Sometimes, it’s just fun to watch a bunch of talented actors ham it up in front of big lights and sweeping vistas (at least when those vistas aren’t just a poorly-disguised green screen).

The standout performance is by far Branagh as Poirot, who, at least in the first act, serves as an undeniably charming straight man to all of the borderline absurd levels of drama and backhandedness happening around him. Even with a wholly unnecessary “backstory” thrown in for no good reason, Poirot is still an extremely enjoyable character who you just want to keep watching, even after the credits roll.

The rest of the cast is convincing as well, and though several characters were clearly the main focus, the group forms an interesting dynamic when thrust into such murky waters. As an added bonus, the addition of such “misunderstood” actors as Hammer and Letita Wright means that practically everyone on board is ripe for a stabbing.

The settings, on the other hand, did feel slightly flat, a problem compounded by the aforementioned green screen overdose. Much of the movie, as you might have guessed, takes place on a boat, which essentially boils down to a handful of rooms and a slightly larger room where everyone can yell at each other, a stark contrast with the vivid lighting and colorful Egyptian scenery present in the rest of the film.

The plot does eventually come together in a fairly typical detective story fashion, though I never minded the predictable elements since they were almost always presented with the movie’s standard sense of elegance.

It’s strangely comforting to simply kick back and watch all the murderous intruige play out, and the ending reveal delivers the satisfying conclusion you hope for (but can’t always expect) with a mystery such as this.

Much of your overall experience with the movie will likely boil down to personal preference, as well as how tired you are of the many typical murder-mystery tropes present inside it. As someone who found the twist reveal and overall tone of 2017’s “Murder on the Orient Express” (Poirot’s previous adventure) to be a bit half-baked, “Death on the Nile” was far more competent at holding my attention from start to finish, and I found the movie’s plot to be much more cohesive and subversive than its predecessor’s could ever claim to be.

Or maybe I’m just a boat guy. Hard to say.

While it may not offer much of value to longtime fans of the genre, “Death on the Nile” did successfully pull me into its story with a smart set of characters and a stylistic flair that never went unappreciated. Its vibrant and individualistic tone can ring a bit hollow when paired with its admittedly been-there-done-that plot structure, but if you can put that aside you’ll find a well-made and entirely entertaining murder movie that I would reccomend for anyone in the mood for a slickly crafted mystery.

And while I might be tempted to dock points for unoriginality, it shores up the competition for the coveted “Best 2022 Murder Mystery on a Boat” award, or at least until “Knives Out 2” washes it away.