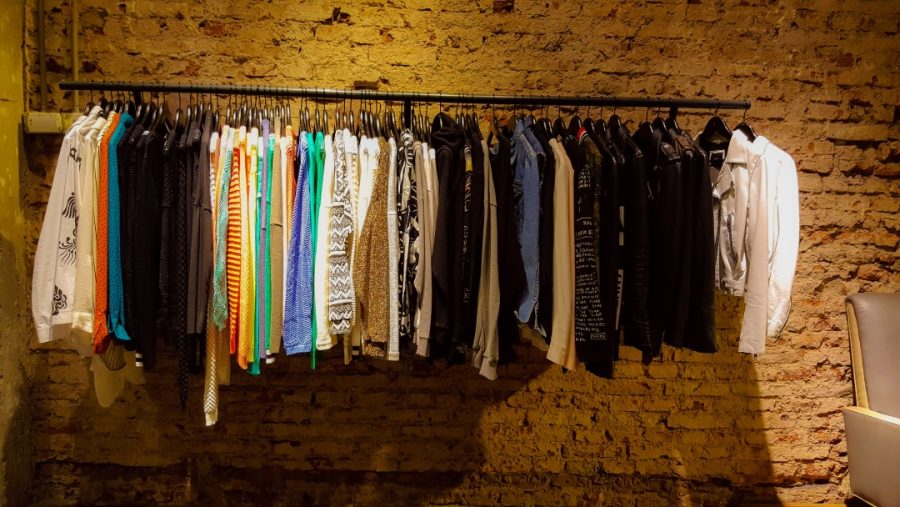 I hit that point in the year. As spring arrived, I once again peered into my closet, realizing the once trendy clothes I took pride in were now obsolete in the fashion world. I remember putting my previously fashionable 80s clothing in a bag to donate. While those bags filled up with acid wash jeans and scrunchies, new bags of bootcut leggings and velour sweatsuits arrived at my doorstep last year. But now, as trends are shifting, the cycle seems to repeat itself once again.

Trends surround each and every one of our purchases. From your furniture to your fashion, someone, somewhere had to come up with the color, design and look of it all.

Throughout our lifetime, fads surround our every purchase according to Family and Consumer Science Educator, Ronna Pflanz.

“[Trends are] reaching and affecting everybody whether they realize it or not. It is absolutely everywhere. I’m trying to think of somewhere it isn’ t … I mean just everything, anything and everything.” Pflanz said.

[Trends are] reaching and affecting everybody whether they realize it or not. It is absolutely everywhere. I’m trying to think of somewhere it isn’ t … I mean just everything, anything and everything. ”

In 2021, fashion began to repeat itself with the 2000s. Bootcut leggings, juicy couture sweatsuits and wired headphones made a resurgence. But trends like this are not just a coincidence, fashion trends tend to repeat many years later according to Pflanz. Many designers decide to take a chance and try to refurbish old trends. However, recycling is not the only way trends come to be.

Trends often develop with high end fashion designers brainstorming new ideas, according to Pflanz. They will often throw new ideas out and see which ones stick with people. If it does, then those brands will push out clothing with that specific style or color. As the trend becomes more popular, more retailers will start making that trend or type of clothing.

Trends also come from runway shows, so popular clothing that the average consumer will wear in 2022, will have already been shown in 2021 runways. These runways are most often shown at fashion weeks around the world.

Another way that trends have developed is social media. Trends can now come from viral videos on TikTok or Instagram. Just like how in summer 2020, a few videos on TikTok inspired thousands of teen girls to start dressing alternative/indie. A trend created solely by average people making videos and posting them.

Junior Lally Coleman is a fashion fanatic who gets her inspiration from all different sources.

“I’ve been loving Pinterest. I feel like [Pinterest] aids a lot of seasonal and occasional fashion. And I love making boards that correspond to my mood or occasion,” Coleman said. “I also look up to  a lot of 2000s icons and fashion models like Bella Hadid, Kendall Jenner and also a lot of small influencers and sometimes I even [make] my outfit from a recent runway show I like to just kinda mix it up.”

The new age of social media is not just something for Gen-Z. The higher-ups in the fashion world are starting to notice too.

“These [designers] aren’t that stupid, you know, they’re watching social media to pick up on wherever they can maximize their earning potential. So if they see kids are starting to pick up on that [trend]. [designers] will start applying it immediately into their lives,” Pflanz said.

Famous influencers also have an enormous impact on upcoming trends. Influencers like Emma Chamberlain and Kendall Jenner are trailblazers for seemingly every new trend to come to teenagers.

“I’ve been loving like athleisure lately and the whole concept of simple fashion and how we can dress it up and elevate it. I think that, especially, Kendall Jenner does that, she just takes the small subtle things and elevates them with little accessories,” Coleman said.

Pflanz predicts fashion from the 70s, 80s and 90s are coming back. Preppy sweater vests, fake pearls, denim on denim, pleated skirts, crochet textures and grunge are some of the throwbacks on Pflanz’s list.

She also predicts that a new era of dopamine dressing, an era where people dress in bright, flashy outfits in order to boost their mood, is upon us. Pflanz says due to COVID-19, dopamine dressing is going to be a way to cope with low spirits this year.

With social media now affecting the trend cycles, the pieces we seemingly just added to our closet — preppy sweater vests, denim and grunge alike — will soon be a thing of the past. Though the trend cycle is certain to repeat, a common misconception is social media’s role in it. Some may say that trends come and go quicker than usual, but that is not the case.

“Trends would still probably linger around as long as it would have before social media. Because you know, [designers are] just waiting for the next trend. it’s just getting picked up much faster,” Pflanz said. “So designers that are already established really need to be on their A game to pick up on it as quickly as everybody else in order to make the most amount of money they can before the trend fizzles out.”