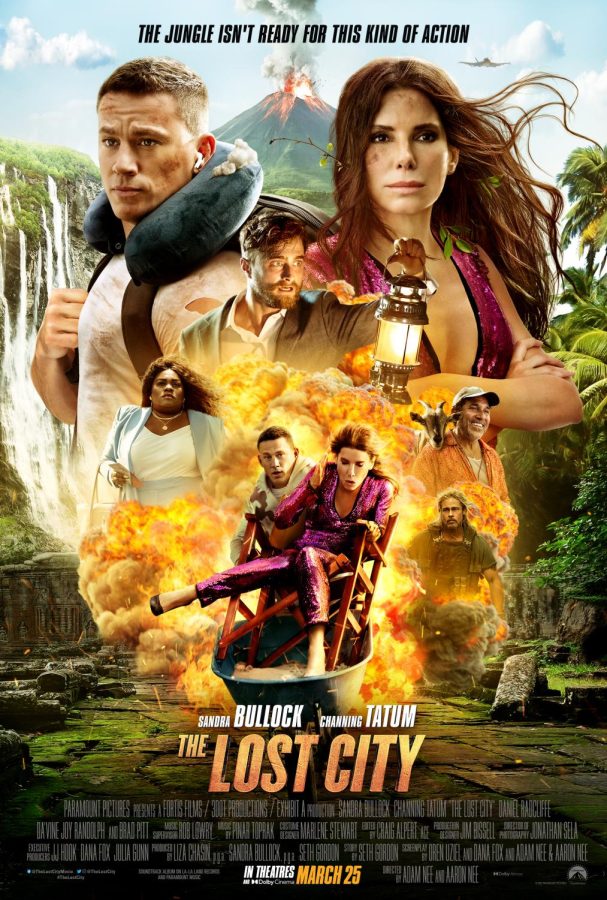 Can I just say, props to Channing Tatum for having very big roles in two of the most popular movies this month. One movie being “Dog” and the other “The Lost City.” But I’m here to talk about the second movie he appears in.

“The Lost City” is what you call a Rom-Com; a romantic comedy. And I think that title hit the nail on its head for this movie. Not only because they were aiming to do that, but because of the recognizable actors the casting director chose. The main character, Loretta Sage, is played by Sandra Bullock who also happens to be the producer for the movie. Loretta Sage is a popular book writer who is famous for her book called The Lost City of D and her cover model Alan (Channing Tatum), who’s had a secret crush on her for years. While on the book tour to promote her new book, she gets mysteriously kidnapped by Abigail Fairfax (The actor who played Harry Potter, Daniel Radcliffe). When Alan and Loretta’s publicist, Beth Hatten (Da’Vine Joy Randolph), notices Loretta is abducted, they call upon the alluring, ex-navy seal Jack Trainer (Brad Pitt) to rescue her.

I’m just going to come out and say that you should watch this movie. As of right now, Rotten Tomatoes does not currently have a score on this film. But with pure instinct, I already know it will be rated high because of how great this movie is. Plus, as an added bonus, it is a great date night movie.

Now, at first I thought to myself, “Ugh, I don’t know if I want to watch it. I mean, I don’t really like the romantic genre so this movie won’t be any different.” But as I watched it, I proved myself wrong as I loved this movie. So if you have any doubt about watching this movie, just go and watch it. You’ll most likely prove yourself wrong like I did with all the action going on that constantly draws you more and more into the movie. Plus it’ll give you a reason to get that extra salty popcorn that people die over, and who doesn’t want extra salty popcorn.

Besides the extra salty popcorn, I guarantee this movie will make you laugh out loud at least twice. At some points, when I went to see the movie at the theater, the whole room was filled with laughter. Plus, another thing that I really enjoyed about the movie was the storyline. I came into the theater thinking that this might just be another comedic film that uses a cliche storyline that we’ve seen a thousand times over just to have a basic plot to keep the viewer intrigued.

I came to realize that this wasn’t the case for “The Lost City.” I really enjoyed what they did with the storyline. And in the end, Loretta uses this whole experience in this movie to write her next book, which she was contemplating doing. And the love story about Loretta and Alan was just perfect. He was madly, but secretly, in love with her but she didn’t see him as more than just a pretty boy that was still trying to figure out his life. But in the end, through the character’s quality time together, Loretta finds out that Alan is her true hero.

Now stop what you are doing and get a ticket and enjoy this movie along with that popcorn we all know you want.