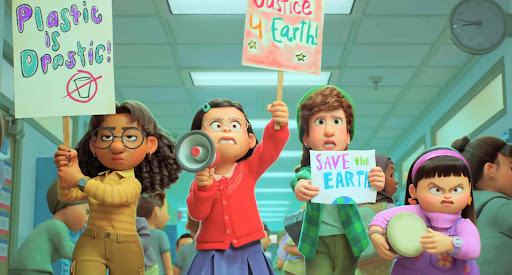 When I first watched the official trailer of Disney Pixar’s “Turning Red” a couple weeks ago, I was a little skeptical. Afterall, the first thing said by the main character was “I’m Melin Lee. I wear what I want, say what I want. 24/7, 365” which sounded so overly embarrassing and forced that I almost didn’t want to watch the movie. But, as I had nothing better to do over spring break, I decided to give it a try.

So when I sat down to watch the movie after it was officially released on Disney+, I was expecting to have to sit through an excruciating 1:47 of Disney Pixars’ out-of-touch attempt to relate to “different” teens. But, much to my surprise, I actually thoroughly enjoyed the movie, for a variety of reasons.

The overly-simplified premise of the movie is that 13-year-old Melin “Mei” Lee turns into a giant red panda whenever she feels a strong emotion due to a hereditary curse.

One of the things I enjoyed was that it breaks the fourth wall which, if I’m not mistaken, is Disney Pixar’s first animated film to do so. This gives the movie a unique feel unlike anything I have seen from Disney Pixar prior.

Diversity in the animation, voice actors, directors and writers also sets the movie apart from others. Many movies have one or two of the aforementioned diversity traits, but I haven’t seen many movies, let alone animated ones, that check so many diversity boxes.

However, of course not everyone did not enjoy the movie as much as I did. For example, film critic Sean O’Connell stated in a review and tweet, both of which are now deleted, that the audience for “Turning Red” “is very specific” and that the movie is “exhausting” unless you are in the “very narrow … target audience.”

I strongly disagree with this claim as I, who is a white American who was not alive in 2002, found the films extremely relatable and enjoyable.

Another more common complaint about the film is that it is too inappropriate for kids. I guess I could see how some might view the film as inappropriate — that is if you consider periods and puberty inappropriate topics, which I most certainly don’t.

Sure, pads are mentioned (oh no, a sanitary that almost every girl will use in her life!) along with crushes, but they aren’t talked about unnecessarily or in an inappropriate way.

Additionally, the vast majority of critics thought highly of the film as it received an impressive score of 94% on Rotten Tomatoes.

My only minor complaint is that some parts of the film are unrealistic, like the fact that no one called animal control when they saw a giant red panda running through the street and causing car accidents and extensive property damage.

However, I didn’t let that keep me from enjoying the film as, afterall, plenty of Disney and Pixar movies are unrealistic such as “Up,” where balloons were able to lift a two story house without a problem.

All-in-all, I thoroughly enjoyed the movie, and I would definitely recommend it to people of all ages and backgrounds.