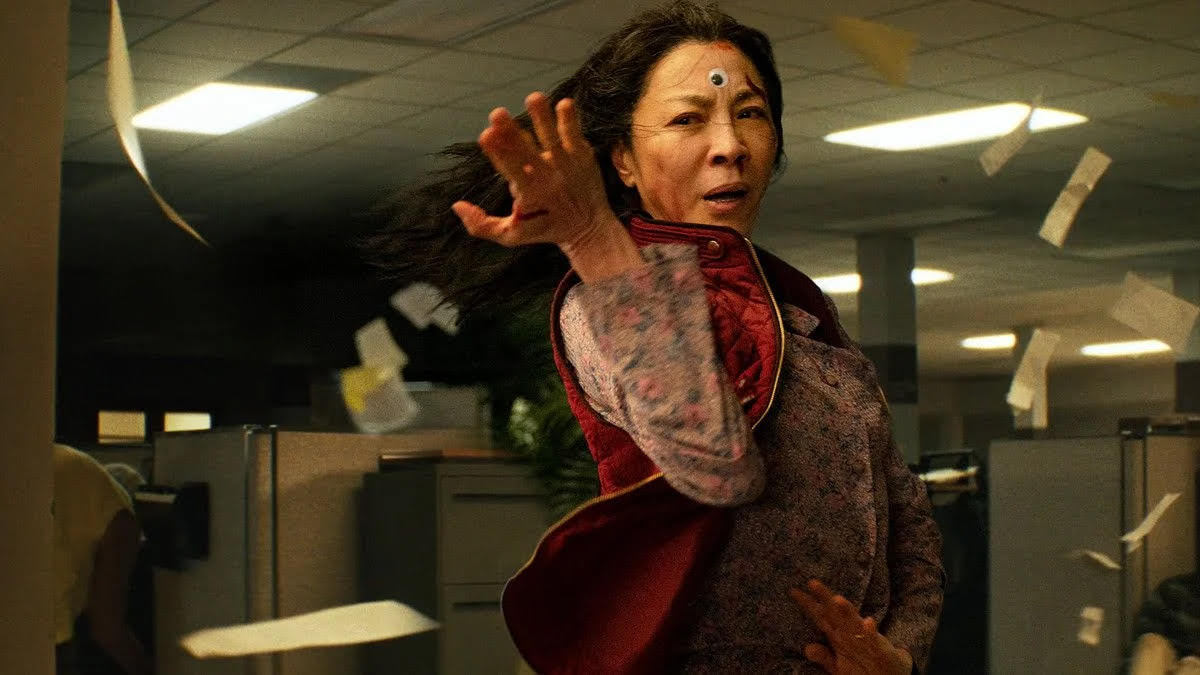 “Everything Everywhere All at Once” review: better than a blockbuster

The title of “Everything Everywhere All at Once” (“EEAO”) may be a bit deceiving. It’s not “all at once”: it’s actually 2 hours and 20 minutes. It’s not “everywhere”: in fact, the number of showtimes in our area is quite limited. But with all due courtesy and respect: dear god, it most certainly is “everything.”

Usually when reviewing something, I need to refrain from just bullet-pointing whatever may be good or bad about a movie, but with “EEAO” there’s no need. Everything is good. Nothing is bad. There. Go watch the movie, you uneducated sheep.

I’ll admit this isn’t so much a review as it is a public service announcement to go see the movie, but with a film this unabashedly spectacular I have no problem putting on the old shill hat for this special occasion.

Simply calling “EEAO” smart feels like a disservice. You can’t be smart to make a movie this good: you have to be creative, funny, clever and fueled almost entirely by some kind of otherworldly god-tier filmmaking powers that I can’t even begin to understand.

Yes, it’s a multiverse movie. Yes, it’s sandwiched in between two other massive multiverse-centered blockbusters in a time of year that already has a bajillion other movies to see. And yes, you’re an absolute ignoramous-waste-of-space-moron if you don’t go see it anyway.

The movie packs more creativity and heart into single scenes than most could hope to achieve in a full runtime, and it does it without even breaking a sweat. Incredible costumes and laugh-out-loud jokes are present for sometimes only a fraction of a second then quickly tossed away due to the movie’s sheer confidence that whatever is coming next will be even bigger and better (spoiler: it always is).

There will never, ever be another movie like “EEAO,” and while that’s far and away a good thing, it also means that you will miss what I can promise to be one of the best movie experiences of the year if you don’t see it now.

You know the saying “mother knows best”? Well I know best here, and this is me shoving cinematic broccoli down all of your throats, except for the fact that this broccoli is doused in butter and sugar and covered in chocolate and cream cheese to the point where even choking on it would be enjoyable (yes this does imply that I’m your mother try not to think about it too much).

The movie feels like a celebration of all the wonder that can be derived from both the absurd and the mundane; there’s no limit to the imagination on display in some scenes, but the movie is also never afraid to reel itself in and let the characters carry the story.

It should be a foregone conclusion from all the other gushing I’ve been doing, but all of the acting, cinematography, lighting and special effects are quite visibly top-notch. There just aren’t any weak aspects of the movie; if you can go through this movie feeling nothing then I highly recommend you leave the theater immediately for a long stay at the morgue.

There’s nothing that I can say that won’t undersell or even spoil how special this movie really is, but in all honesty, I cannot think of a single instance where a “laughing while crying” movie actually produced said effect outside of this one. This is the kind of movie that just straight up makes me smile; not because of any particular moment or scene, but because it’s just so effortlessly beautiful in everything it attempts.

I won’t presume to know you or anything about your tastes, but if my meaningless little internet voice accomplishes anything, let it be convincing you to see “EEAO.” And seeing as I’m probably not allowed to make threats of physical violence on here and my reader-verbal-abuse-o’ meter is reaching its max threshold, that’s about the best I can do.