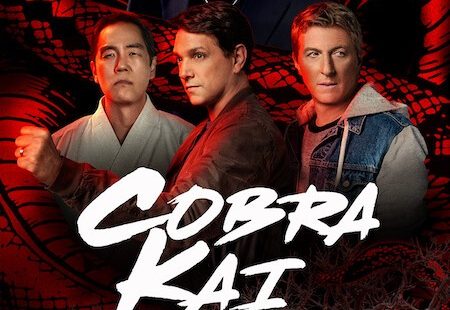 After spending my last winter break binging season four of Cobra Kai, I was shocked when they announced the date for season five, which was Sept. 9, 2022. Even though it caught me off guard, I was quite relieved especially after I was forced to waste my last crucial weekend of break watching a show that hadn’t impressed me too much.

After season four, I personally felt the show didn’t have a lot of direction and I wasn’t sure where they would take it. Cobra Kai had defeated Miyagi-Do and Eagle Fang in the All Valley tournament, but the catch was that Cobra Kai’s sensei Terry Silver paid off the ref for the win.

With several loose ends to tie, I thought that Cobra Kai did an amazing job taking the show back to a more simplified version of itself. The show started incorporating more and more of its most liked characters, specifically Johnny Lawrence, Daniel Larusso, Chozen Toguchi, Robby Keene, Miguel Diaz, and Sam Larusso. To me, the involvement of these characters really brought back the identity of the show.

In season five, the acting was sub par at times, the jokes were extremely cheesy, and there were still quite a few storylines to follow. But I would say that this season is my third favorite season, behind season one and two. FINALLY we were able to witness the collaboration of Johnny and Daniel, Robby and Miguel, and Sam and Tory. I thought Cobra Kai added a lot more of Johnny Lawrence’s sarcastic dialogue which really helps keep the traditional 1980’s feel of Johnny. Not only did they bring back Johnny’s iconic humor, they continue to bring back old characters from the original Karate Kids. Mike Barnes, and Jessica Andrews (Karate Kid three) were included in this season and both held a decent amount of screen time.

The addition of all of the old characters and the combination of our most beloved characters really made this season a good one for me. While I loved seeing the fall of Terry Silver, it leaves me in a little bit of panic for what will come next season. Obviously John Kreese just broke out of jail, but does that mean the Cobra Kai kids will rejoin Cobra Kai? Do people think Kreese is dead?

Yet again, Cobra Kai has left me with endless uncertainty, but I believe that this confusion is what makes Cobra Kai so successful and popular. It allows the writers to take any sort of direction, which always surprises us in the end. I’ll be curious to see what kind of story is put together for season six.