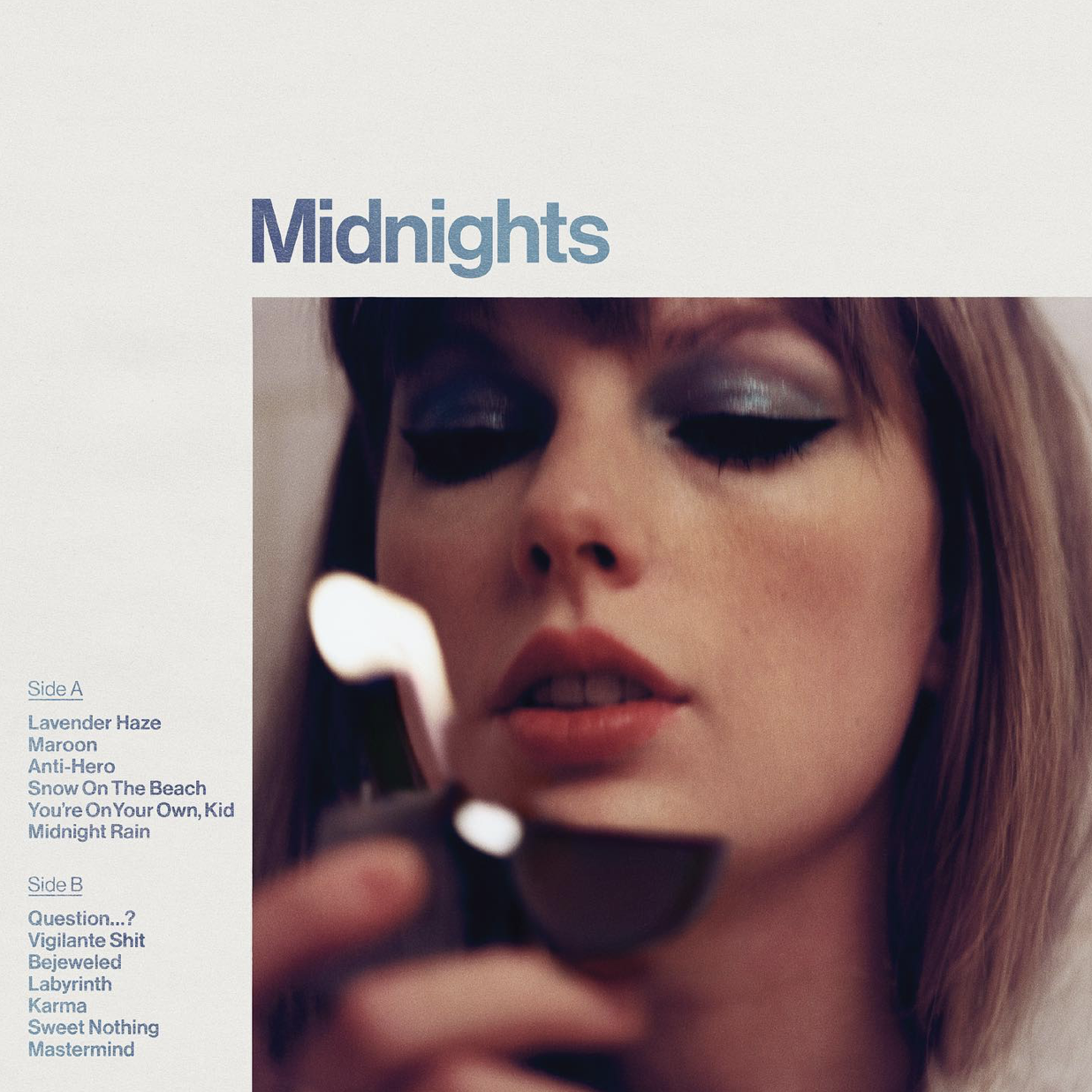 Hickory dickory dock, it looks like we’re finally “Out of the Woods” of the folksy vibes Taylor Swift delivered in her eight and ninth albums, “folklore” and “evermore” respectively. Her 10th album, “Midnights” released on Oct. 21, signifying the start of a new era meant to capture all of those late night ponderings. There are 13 tracks, along with seven bonus songs — called  three a.m. tracks — to pair in a collective album that calls fellow night owls. As a whole, the vibes fit that of “Lover,” “1989” and “Reputation,” while still bringing a fresh spin.

Despite being overwhelmingly “mid” on the first listen, these late night musings have managed to grow on me. Not all in the same order, of course. Thus, the need for a comprehensive ranking based on vibes. Let’s really dial into how the tracks on “Midnights” measure up, shall we?

“Anti-Hero” has an unmistakable internal tension, combined with self deprecation to the max. Lyrically “Anti-Hero” is one of the strongest tracks on “Midnights,” containing a whole gaggle of bangers: TikTok’s trending favorite, “It’s me / Hi / I’m the problem, it’s me,” the “Knives Out”-esque vibes of, “I have this dream my daughter-in-law kills me for the money / She thinks I left them in the will / The family gathers ’round and reads it / … ‘She’s laughing up at us from hell!,’” or the drab reality of being left with your own thoughts, ‘I should not be left to my own devices’ / They come with prices and vices / I end up in crisis.”

There is a raw sort of honesty — the fear of nothing, anxiety from everything, and ever-present doubt — paired with an upbeat track that is perfect to scream (with angst) with the windows down, urging you to root for the anti-hero. Or in this case, for this track.

Vibe: Flipping through a childhood memory box, finding frayed friendship bracelets and even more fragile memories. Emotional to the max.

Swift once again chose violence with her fifth track (which are widely known for hitting emotionally), “You’re on Your Own, Kid.”

This slow-burn story about reminiscing past relationships throughout midnight ponderings, as per the album’s namesake, really showcases Swift’s fantastic storytelling. Throughout, an ever-present loneliness lingers, feeling the loss of what could have been, if only she stayed.

It’s OK, though. Hold the tears, because “You’re on Your Own, Kid” has a vaguely upbeat track and a classic Swift’s typical flair for a hard hitting bridge. Shove the watery traces of tears back into your eye sockets, and the memories even deeper into the memory box. Bury it. And if this hits too close to home … maybe go to therapy.

Vibe: the older wine-aunt of “Red”

Oranges and orange, Ms. Peacock and blue, grass and green, Taylor Swift and “Red” — all iconic color duos. “Maroon” has a more mature vibe than its hue-like predecessor — a more elegant shade of “Red,” if you will.

Looking at the highlights of what ended in toxicity, letting the dawgs out to dance on the streets of New York (seriously, how does she not have tetanus?) and a rapid, lyrical emphasis with airy delivery, “Maroon” hits its mark. As the song says, it’s a real legacy to leave (it was maroon).

“Bejeweled” is what you get if you snort glitter while mastering a Gigi Hadid level runway walk. Seriously, the music itself feels sparkly. Harnessing the playfulness that the “Lover” album attempted and largely overshot with misses like “Me!” and “You Need to Calm Down,” “Bejeweled” captures the fun, pop energy far more effectively. Complete with light jingling in the backtrack, you can feel the glow radiating off of the song; truly, bejeweled from top to bottom.

Vibe: The toxic Instagram stalkers that we all are deep inside.

With the opening that is giving the clickity clack of the good ole Insta stalk and the crescendo of the song’s progression, “Mastermind” has grown higher in my rankings with each listen. I didn’t appreciate the depths of this gem originally, like Swift’s prey did (“I laid the groundwork and then saw a wide smirk / On your face, you knew the entire time”), but with each listen I fully see the mastermind-ing that went into this great “Midnights” creation.

Watch out Blake Lively, Swift has a new bestie: karma. Karma is on her side —  a reward of sorts for doing right and a reaper to those who have not, according to the song . As Swift looks back at her progress and tribulations, she sees her current station as positive karma that has entered her life. It’s captured behind the peaceful chorus, “Karma is the breeze in my hair on the weekend / Karma’s a relaxing thought / Aren’t you envious that for you it’s not?”

Petty to a tee (as she should be), “Karma” is successful in many ways, along with answering many of the Swiftie’s most pressing questions about the mysterious scrapped sixth studio album. There are a plethora of Easter eggs to sift through, but one thing remains true: karma is a cat. And it’s peak comedy. I hope all of the Karma theorists of 2016 are satisfied.

Vibe: Catchy enough to never, ever leave your brain. Seriously, ever.

Can I ask you a question …? Do you remember any of the lyrics beside the chorus? No. No, I do not. The bop-tastic beat and catchiness of the chorus plagues the constant soundtrack of my brain, similarly to the plaguing questions Swift asks about infinite what-ifs in the song. “Question…?” has quite literally Gorilla Glued itself to my brain; for that, I decree it the seventh slot on my ranking.

Tell me this isn’t the type of music you want to be pumping through your Airpods as you walk down the streets of Arlington Heights on a brisk fall afternoon. Iced chai latte in hand, you better believe each step taken is to the bounce of the beat. Slay on, girl.

Reminiscent to “Cruel Summer,” “Lavender Haze” feels widely personal — let’s really dive into those societal expectations —  while simultaneously being dropped on a track that is meant to be aggressively lip synched to in the mirror.

Vibe: Skip around a meadow in a babydoll dress

There is a whimsical aura to this song — really leaning into the “sweet” part of the title — complemented by honeyed words and simplistic piano backings. Dreamlike and overwhelmingly pretty, “Sweet Nothing” proved to be a pleasant surprise.

Vibe: Underwater disco, while traveling at midnight on a train

A more jaded recollection of lost love, “Midnight Rain” tells the tale of a girl too distracted by a career to slow down. Not bad by any means, but the retro energy of the synth backing track doesn’t quite scratch the musical itch in my brain.

Vibe: Season two of “Friends,” “The One Where Joey Moves Out.” With the waterfall. You know the one. (If you don’t, I really can’t help you.)

“Snow on the Beach” features soft vocals, like watching the first snow fall from the warmth of your closed bedroom window. It’s pretty and reflective — not really giving much else. Rather than an explosive duet, “Snow on the Beach” is a sleepy song, featuring Lana Del Ray’s breathing. Oh! And a couple harmonies if you really listen closely.

“Draw the cat eye, sharp enough to kill a man.”

I really thought Swift was a stronger lyricist than the couch-ridden millennial that writes T-shirts for soccer moms to be sold at Walmart; however, with this first line, that is severely in doubt. With fierce percussion in the backtrack, paired with a fiercer story of revenge, “Vigilante Sh*t” is reminiscent of the Reputation era’s “Look What You Made Me Do” and “This is Why We Can’t Have Nice Things.” Admittedly, not my thing (I’m a “Red” slash “folklore” gworlie), but not a bad showing.

Largely forgettable, “Labyrinth” has one memorable quality in my mind: its similar namesake to the fourth Percy Jackson book. Hardly treacherous on the ears when Spotify shuffles the album, but its lackluster and widely simplistic lyrics aren’t catchy enough to fully take hold in my mind or on a higher spot on this list.