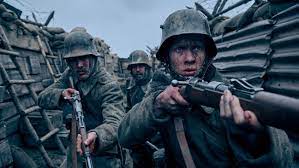 “All Quiet on the Western Front” hits the mark

This movie casts Felix Kammerer as Paul Bäumer, a young soldier looking forward to bringing honor to his family, and above all Germany. Bäumer immediately enlists in the German military along with his friends in hopes of helping Germany win the war. As Bäumer experiences trench warfare on the front lines, he learns the horrid truths of battle.

What makes this movie stand out is the exceptional filming. The variety of camera angles as well as some real gritty lighting fits with the movie well. At times in the movie I felt my heart racing as barrages of artillery dropped incessantly from the sky. In other parts, my heart stopped; it had a horror movie feel unlike any other war movie I have seen.

The gore in this movie was very graphic. Bloody limbs, bullet wounds, and dead bodies were all shown for a relatively moderate amount of the movie. I would caution anyone from seeing this movie if they are sensitive to blood or cannot handle much violence.

With all the positives, I did find myself numerous times checking to see how long until the movie ended. Looking back the pacing seemed appropriate, but for 148 minutes of run time there were a little too many lulls in between the action.

While I am critiquing, I also think the music was odd at times. Don’t get me wrong, the dramatic drumming music was powerful; it just didn’t fit the sad theme of the whole movie.

On the other hand, the dialogue in this movie was great. It had some really powerful quotes from outstanding actors. Quotes such as “My son was killed in the war, he doesn’t feel any honor,” or “When you’re starving, you will do anything,” set the atrocity tone nicely.

What’s more is the main character’s facial expressions and non verbal cues were near perfect. Kammerer nailed down the character’s transformation from a proud boy to a traumatized man. His nose dive descent from innocence was exemplified from his masterful display of his disturbing thousand yard stare.

Some powerful ideas such as nationalism and false egos were explored quite profoundly in this movie. The movie’s main message was that power hungry dictators safe and sound from the war were making decisions to save their reputation that ended up killing tons of lives from unnecessary warfare. In the last scenes, where the movie finally reaches its climax, the German dictator launches an invasion only a few hours before the cease fire would occur. He did this in hopes of a final victory for the German army.

Unbeknownst to him, the final scenes depict the last warfare that took countless lives, all for a meaningless victory in regards to the dictator’s ego. Nobody ended up winning World War I, and this is clear after the movie’s final statements right before the credits.

During the whole movie I experienced a whirlwind of emotions. I felt sorrow for all the disheveled bodies I saw that died. I was angry at the German dictator and the egotistical French negotiators. I was horrified by the senseless acts of violence like when German surrenderers were slowly burned to death by flame throwers.

Most importantly, I gained a valuable viewpoint on the dangers of too much nationalism and a pessimistic perspective on the motivations of leaders who are fond of war. This anti-war movie does a good job at achieving the desired anti war sentiment.

Ultimately, I wouldn’t expect someone who’s into comedy or lighthearted movies to succinctly enjoy this. Rather I think, someone who likes war movies, politics, or just plain, old action should try it out.

Overall, I’d give this film a 7/10 score. Although not revolutionary, this movie was thought-provoking and powerful. As mentioned above, the movie felt long, but the incredible climax redeemed the movie. The quality camera work and the emotional acting deems this movie worthy of a solid review.