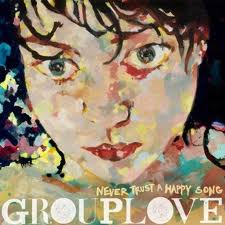 The name of Grouplove’s first album “Never Trust a Happy Song” could not apply more to the songs it contains. At first, the listener hears upbeat instrumentals and the lead singer Christian Zucconi singing happily about good times. However, a second listen to the lyrics shows a much deeper meaning behind these “happy” songs.

The opening song on the album, “Itchin’ On a Photograph”, incorporates melodies and vocals similar to the later songs. It is truly a feel-good song. But the message the song brings is much more. The lyrics suggest how he is feeling nostalgic, wanting old times back that he can never have. The chorus even says, “I’m giving up on looking back/ I’m letting go of what I had.”

A few songs later, this theme is revisited in another seemingly cheerful song “Colours”, with a good beat that makes you want to dance. But just as the title says, this is no exception. The song revisits themes in “Itchin’ On a Photograph.”

The second verse says, “And I think of my ways, I think of my days and know that I/Have changed.” Towards the end of the song, the lines “We call it life/Oh yeah, that’s what we call it/When we can’t call it all”, repeat over and over until the finish.

In contrast to the first four songs, the fifth is much different. In “Slow,” instead of Zucconi taking the vocals, Hannah Hooper sings this song. And this song is not happy at all, yet it stays true to the name. It is an appropriately slow song with the lyrics being just a few lines repeated. This doesn’t make it a boring song, though. “Slow” contrasts the other songs in the album in an amazing, sensible way.

Another contrasting, slower song is “Cruel and Beautiful World” which is unlike the others. The mood of the song would seem slower, sadder. However, Zucconi is talking about how he and his “girl” can make it through the “cruel and beautiful world” together.

The closing song to “Never Trust a Happy Song” ties all the themes of the rest of the album together in an almost five minute song. Although it is the longest song, “Close Your Eyes and Count to Ten” feels much shorter, and does anything but drag on.

The instrumentals vary, with a different feel in different parts of the song. The beginning starts off slow, with a guitar strumming. Zucconi enters, singing softly. But about a minute into the song, it turns with the vocals getting stronger with “oohs” and “aahs” from Hooper in the background. “Talking ’bout talking from withing/Talking ’bout how you wanna live/We call it metamorphosis/Yeah this is metamorphosis”.

At $9.99 for 12 songs, the price of “Never Trust a Happy Song” doesn’t dissappoint, and neither does the content. The song arrangement flows well with slow and fast songs almost alternating. The deeper meaning in the lyrics provides a second level for the listener.

All in all, “Never Trust a Happy Song” was a great way to start off Grouplove’s music career.